Here’s Everything You Missed At The GX3 V.I.P. Party

Written by Daniel Villarreal on December 11, 2015
Be first to like this.

Unless you shelled out $159.95 for a V.I.P. ticket, then you probably missed last night’s V.I.P. party. But don’t worry! We took lots of pictures and drunkenly chatted with a handful of high- and low-profile attendees for GX3 gossip and other community and industry chat. Let our delightful recap re-create the entire experience for you.

About 200 or so folks attended last night’s soiree. It took place in the Salon Ballroom of the Marriott Hotel — a large, carpeted, dimly lit ballroom whose glass-art light fixtures resemble hundreds of sperm trying to impregnate an egg. There were two open bars that lasted far longer than the rumored 10:30 p.m. cut-off time.

Throughout the night, the Super Soul Brothers played upbeat jazzy versions of video game favorites including the original Sonic theme, the Lost Woods theme from The Legend of Zelda: Ocarina of Time, Guile’s music from Street Fighter II, among others. Except for a few people grooving while seated at their tables or standing in line for booze, almost no one danced.

Two people however did briefly mock-fight while the Super Soul Brothers played Pokemon battle music. Later on, while playing music from Mario Kart’s Rainbow Road, GX founder and MidBoss CEO Matt Conn — wearing a tribal print tank-top and shorts, clunky high-tops and his face painted in blue with the “power icon” like a tribal avatar version of the GX3 robot mascot Turing — seized a checkered racing flag and ran around the room in drunken exuberance, waving the flag as if finishing a victory lap for the convention’s organizers. Later, he grabbed the mic and joked with the band; someone in the audience jokingly groaned, “Oh no, he’s got the mic again.”

The line to the bar. Chatting made it go by quicker. So did being drunk.

Talking about booze, the line was about 15- to 20-minutes long and 40 people deep with some folks going right back to the end of the line as soon as they got their drink. One GX3 organizer delighted that the attendance wasn’t higher noting, “That saves us a lot of money since the hotel charges nearly $16 a drink.”

Early into the night, we chatted with Filipino vlogger Mike “Monk” Ponsandes who opined that LGBTQ representation in video games has been slower than in TV and movies, partially because film, TV and print aren’t interactive and don’t offer the chance for anonymous bigotry and hate speech found in gamer forums. He also said that the harassment women face in gaming communities and their low numbers in gaming industries reflects the same misogynist bias we see in the film and TV world.

He did however consider games a bit of racial and gender equalizer, especially when a player’s worth is determined by skill and when avatars let players hide behind any number of online identities. We don’t know if we completely buy that, especially since gaming consoles and conferences like GX3 can be cost prohibitive and not super racially diverse, but it’s an interesting thought nonetheless.

Security sprite Zenith Star (it’s a family name?) — preferred pronouns: he/him/unicorn — wore a deconstructed, western-style leather vest and double belt held together with ring clips and carabiners. He got it from a designer named Astral Chrysalis at a rennaisance faire.

While standing in line for our second free drink, another female sprite — a bisexual from Tyler, Texas who attended the event with her husband — called GX3 “GDC without the bullshit” (that’s Game Developers Conference, the annual San Francisco gathering of, well, game developers). When we pressed her for details, she said GDC has good information, but sucks when it comes to diversity, like pronouns. Her husband — who says he’s volunteered for GDC for 10 years — agreed that it started off small and cool and quickly turned into a gigantic, profit-driven event.

In contrast, she praised GX3 for having safe spaces for asexuals, woman, people of color, and transgender people and for really trying to respect personal pronouns with the new pronoun stickers at the bottom of each attendee’s badge. She said all sprites have been instructed to refers to folks as “people” (as in “that PERSON over there, rather than that MAN or WOMAN over there”) and to stay pleasant and gentle should anyone loose their shit over a pronoun argument. 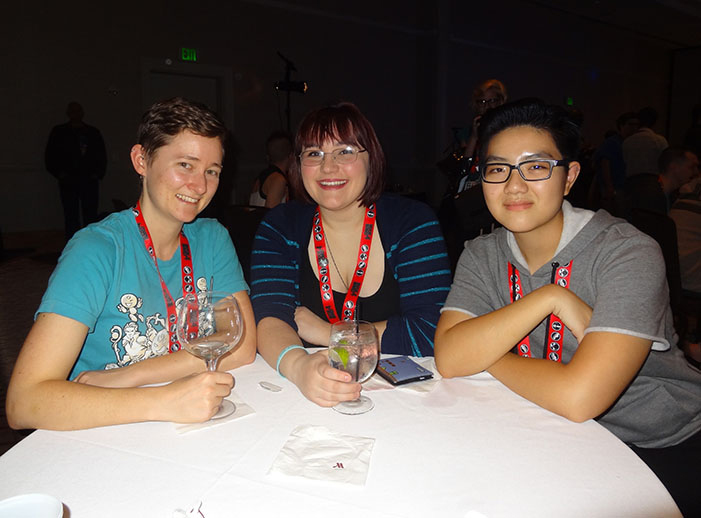 A quick poll among some of the female participants (not necessarily those pictured above) concluded that Jennifer Hale (the voice actress who has done video game franchises like Baldur’s Gate, Metroid Prime and Mass Effect) should just be “knighted” as Commander Hale. Also most of the females we asked wouldn’t kick her out of bed. One such attendee said, “There are more female attendees (this year), which is a blessing for a gaymer chick in search for love (Jennifer Hale included).”
Outside, a person wearing black and white kitty pajamas and silver Converse sneakers finished their registration and then walked off with their friend who seemed to be dressed as a turquoise-colored seal.

Last but not least, we spoke to Liam Esler, the 24-year-old mastermind behind GX Australia (which will happen February 27 and 28, if you’re game). He said that he decided to launch the Aussie counterpart because he had always wanted to attend GX, but it was on the other side of the world.

“We wanted Australia to be the first,” Esler said. “We got PAX (Penny Arcade Expo) first.” He say that the island continent often gets ignored by the gaming community because it represents only three percent of worldwide gaming sales. Nevertheless, he claims that the Sydney Gaymers is the second largest LGBT gaming community on Facebook.

Unlike the neophyte team that started GX America three years ago, Esler has a bit more event organizing experience. He helps run the Australian GDC conference and says that GX has shown him some of the challenges to expect, especially when it comes to finding sponsors. He said most companies don’t really know how to approach gaYmers as opposed to gamers — they’re still figuring out.

He also said that unlike GX American, GX Australia will be all-ages. He considers it important because lots LGBTQ kids isolated in the vast outback might want to attend, but might not yet be out. They could either sneak away for the weekend and be around their own kind, or bring their families and show that there’s lots more to the LGBTQ community than just sex and bars — “GX isn’t just about being queer,” he said “It’s primarily about gaming.”

He also said they might have to be ask risque cosplayers to cover up a bit more, but as long as they have their butt, boobs and genitals covered, everyone should be okay. 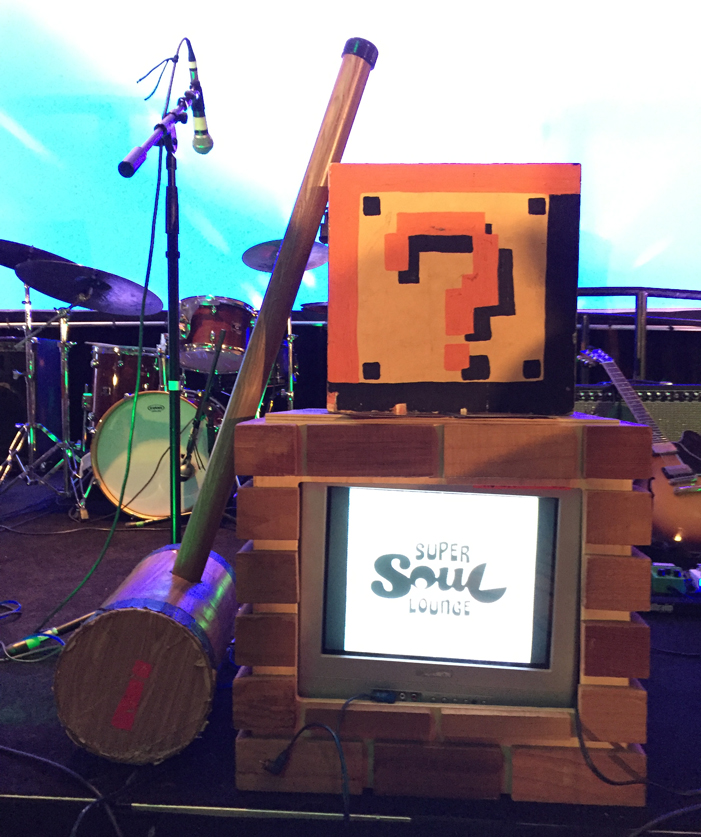 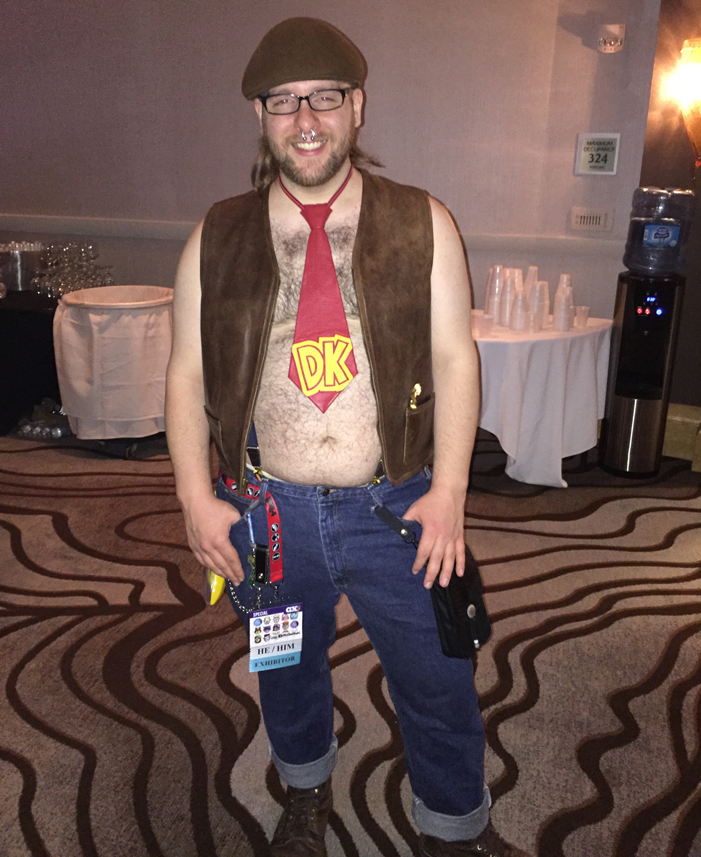 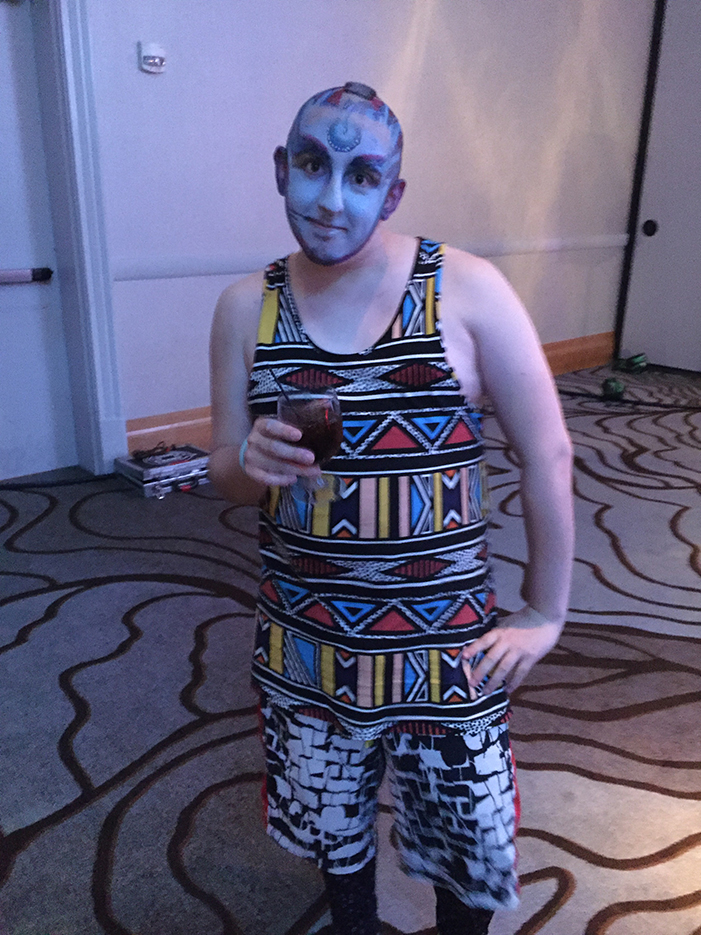 A Host of Our Favorite Podcast, 'Gayest Episode Ever,' Shares His 5 Favorite Episodes
5 Man-Loving British Male Monarchs You Should Know (Oh, and One Commissioned the Bible)
Are the Juggalos Are Our Best Hope to Defeat Far-Right Extremism?
Let's Examine the Phenomenon of Cruising Bathrooms Through 4 Famous Queer Men
English