It’s Veterans Day, so we’re revisiting some of our favorite stories about the military!

Above is a primer on the life and times of Friedrich Wilhelm August Heinrich Ferdinand Steuben from Drunk History.

In sum: von Steuben came to the US after being discharged from Prussia’s military for being gay. Forced to work as a volunteer (because American officers were sick of Europeans comin’ over and takin’ our jerbs), von Steuben was appointed Inspector General by George Washington. Von Steuben’s duty as Inspector General was to turn the Continental Army’s ragtag Bad News Bears into a well-oiled death machine.

Von Steuben didn’t know English, and the soldiers didn’t know French, so Steuben entrusted his military secretary Pierre Etienne Du Ponceau to translate his military drills into English; he also recruited Private Benjamin Walker to bellow profanity at the troops in a language they could understand.

Walker was rumored to be in a relationship with Steuben. Historian William Benemann wrote, “Steuben was also attracted to his ‘angel’ Benjamin Walker, but while Walker held the Baron in high esteem, he does not appear to have been sexually interested,” adding, “Walker had no scruples about exploiting the Baron’s sexual interest although he had no intention of reciprocating.” Sounds realistic. Heterosexual men, especially those from the 18th century, are perfectly comfortable working closely with a gay male boss who wishes to engage them in an act of what they might have referred to as fexual congreff. Walker was friend-zoning the Baron, exploiting him to get what he wanted!

Evidently what he wanted was a long-term relationship with a stately European gentleman, because Walker was running the Baron’s household and handling his personal affairs from 1783-1788.

After the war, the Baron’s teachings were compiled into a book called Regulations for the Order and Discipline of the Troops of the United States, which the US military used as a manual until 1812. Reading the manual gives the reader a good idea of what an utter shitshow the US Army was before the Baron and his entourage sashayed onto the scene. Many of the sections of the manual discuss marching in formation and standardized commands, but Chapter XVIII, “Necessary Regulations for Preserving Order and Cleanliness in the Camp,” is apt to try one’s patriotism. As you read the following excerpts, remember that the Baron included these instructions because he felt they were necessary.

One officer of a company must every day visit the tents; see that they are kept clean; that every utensil belonging to them is in proper order; and that no bones or other filth be in or near them.

Don’t leave bones or poop in your tent. I will appoint an officer to make sure you do not sleep in a bed of skeletons and feces.

EAT FOOD. Not just whiskey. That’s not food. You have to eat things other than that. Benjamin, please explain to these people the difference between whiskey and food.

The sinks [latrines] of the first line are to be three hundred feet in front, and those of the second line the same distance in the rear of the camp.

Don’t shit where you eat. Honestly people this is rule number one of human civilization. I know you’re not even a country yet but Jesus Christ. Benjamin, tell these people they’re filthy savages.

When a soldier dies, or is dismissed the hospital, the straw he lay on is to be burnt, and the bedding well washed and aired before another is permitted to use it.

Don’t make people sleep in beds covered in the bodily excretions of a dying man. Why would you even do that. Benjamin, ask them why they would even do that. 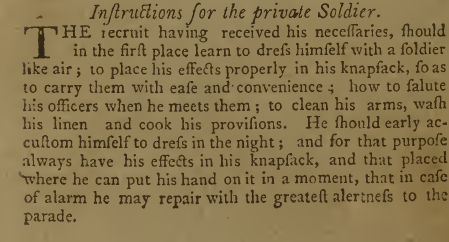 The recruit having received his necessaries, should in the first place learn to dress himself with a soldier like air ; to place his effects properly in his knapsack, so as to carry them with ease and convenience; how to salute his officers when he meets them; to clean his arms, wash his linen and cook his provisions. He should early accustom himself to dress in the night…

Learn to dress yourself. Even when it’s dark out. Also clean your linens and put food in your mouth. Learn some basic life skills. That’s all I ask, you horrible manchildren.

That the men may always appear clean on the parade, and as a mean of preserving their health, the non-commissioned officers are to see that they wash their hands and faces every day, and oftener when necessary. And when any river is nigh, and the season favourable, the men shall bathe themselves as frequently as possible…

Wash your hands and face at least once a day. Please, for the love of god. Wash your hands. Wash your face. Look, there’s a river. Get in the river and wash your various body parts. Yes, all of them. All of the body parts. WASH YOURSELVES FOR THE LOVE OF GOD. YOU’RE LOSING BATTLES BECAUSE OF BAD HYGIENE YOU PIGS. BENJAMIN MY ANGEL TELL THEM THEY’RE COVERED IN SHIT. 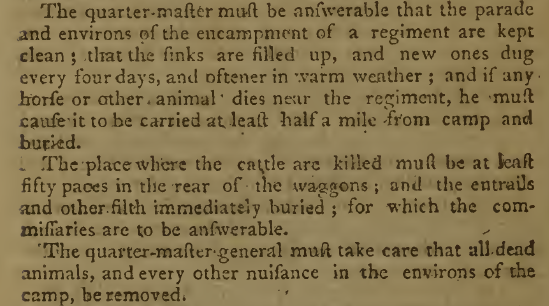 The quarter-master must be answerable that the parade and environs of the encampment of a regiment are kept clean; that the sinks [latrines] are filled up, and new ones dug every four days, and oftener in warm weather; and if any horse or other animal dies near the regiment, he must cause it to be carried at least half a mile from camp and buried.

Benjamin Walker: I’m sorry sir. I… I don’t know how to translate that.

Before von Steuben, the average US Army camp was an incoherent mess covered in human feces and rotting horse carcasses. At last, we can understand how an army that wore bright red coats and stood up straight in big lines without even attempting to take cover could have constituted a formidable fighting force.