How The Blue Ribbon Boys Could Help End Global HIV

Blue Ribbon Boys (BRB), a sex-positive campaign to help stop the spread of HIV worldwide. Working with the Global Forum on MSM and HIV and the gay/bi hookup app Hornet, BRB is the brainchild of Jack Mackenroth — the former Project Runway contestant and HIV-activist behind the PrEP Heroes campaign. Here’s how it works:

Hornet — the world’s second largest gay social app with over 7.5 million users, many of them in countries where HIV is concentrated among men who have sex with other men — will ask users a few yes-no questions about their sexual health, starting with “Do you know your HIV status?” From there it asks some follow-ups, including “Are you taking PrEP daily?” (for negative guys), “Have you achieved or maintained an undetectable viral load?” (for positive ones), and “Have you researched resources for getting an HIV test?” (for guys who don’t know their HIV-status).

Users who demonstrate knowledge and care of their sexual health will get a spiffy blue ribbon on their profile, and they can get the ribbon regardless of their HIV-status, meaning the program provides no stigma against poz-guys or neg-men who take pre-exposure prophylactics like Truvada, unlike HIV campaigns of the past that have trafficked in shame and fear.

Presumably, online booty-seekers will be more likely hook-up with Blue Ribbon Boys because taking care of your sexual health is sexy. But to keep the ribbon, users will have to re-take the questionnaire every three months to keep all info up-to-date. 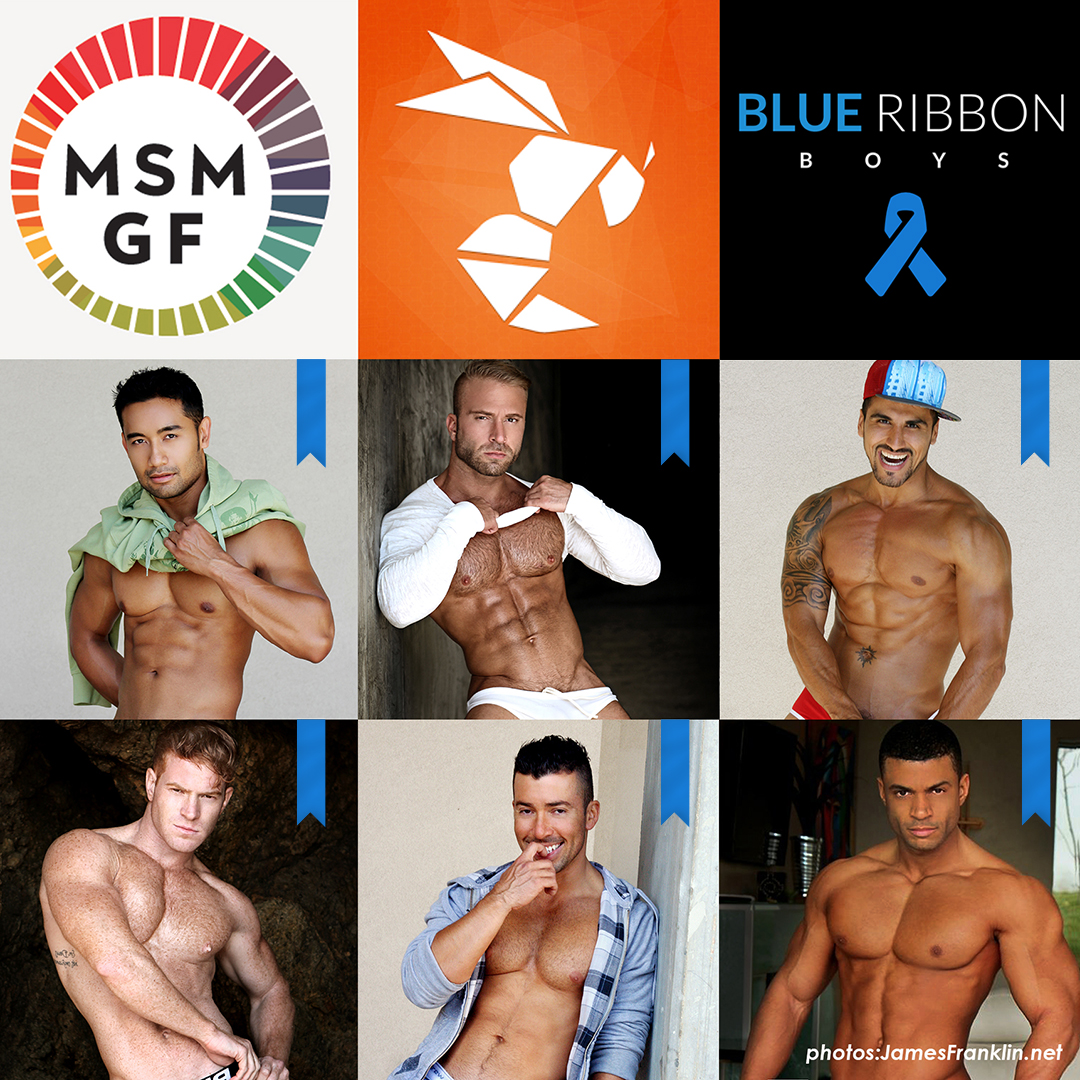 We asked Mackenroth a few questions about the project including where the idea came from, what someone without access to HIV care should do and why the campaign literature focuses primarily on muscular bodies:

Unicorn Booty: Where did the idea for this project originate?

Jack Mackenroth: Blue Ribbon Boys was an idea that I developed after a meeting in Geneva, Switzerland where the gay app owners and CEOs were giving presentations. They were frustrated by the lack of innovative HIV and health messaging that was being presented to them. Sean Howell of Hornet and I took a plane back to the U.S. together and we talked about developing something new — that planted the seed. I work with MSMGF, and we wanted to utilize the massive reach of the gay apps to advocate for our stakeholders and to get important information to men who have sex with men all over the world. I wanted to develop something easy, modern and cool.

How will your immense celebrity status and large fan base help this project?

Ha! Well, I don’t know about that. I think there are several elements that will contribute to the success of Blue Ribbon Boys. Hornet has over 7.5 million users around the world. My visibility in the HIV field can help propagate the campaign. My large social media following doesn’t hurt either. MSMGF has 10 years of experience and expertise navigating global HIV messaging and advocacy. It’s a great combination!

The goal of the Blue Ribbon Boys campaign is HIV viral suppression across all global communities. I see that the Change.org petition is geared towards “World Leaders.” Who are some of these leaders?

We wanted everyone to take notice. PrEP and ARV treatment are essential for stopping HIV transmission but PrEP is only approved in the United States. Often basic HIV treatments are difficult to access in some countries. Universal access is crucial for stopping the epidemic, so all world leaders need to take action.

Presumably some of these world leaders rule in poor countries with few medical resources or anti-LGBT regimes. If a guy can’t become a “Blue Ribbon Boy” because he doesn’t have access to testing or meds, what other steps should he take to get the knowledge and treatment he needs?

He should use condoms and lubricant. If condoms not available there are sexual activities that are less likely to transmit HIV. It’s unfortunate that even though these biomedical interventions exist and are encouraged by the World Health Organization, many governments lag behind. There are many other factors that also contribute: stigma, discrimination, criminalization, homophobia, socio-economic issues… on and on. There is still a lot of work to do.

BlueRibbonBoys.org provides information and access to many resources and we will keep building and perfecting the campaign in the app and on the website in the coming months.

All of the men in the press about BRB are muscled studs. Muscularity has long been used to dispel fear about HIV wasting so pervasive in the late ‘80s and ’90s, but most guys I know don’t look anything like these gym bunnies. What would you say to folks who say that these images don’t represent the people most affected by HIV?

Yes — they don’t. Most men don’t look like this regardless of their HIV status. Honestly, we would’ve liked a bit more body diversity in the campaign and that will come. I was granted the use of the photos by photographer James Franklin. I also want to be clear that Blue Ribbon Boys is not about calling out HIV status.

And, let’s be honest — sex sells and photos of hot guys get attention. These men may not be everybody’s type and they are not representative of any specific community. There is plenty of diversity on Hornet. I like a man who is a little more rough around the edges… but I wouldn’t kick any of these guys out of bed for being too muscular!

The campaign went live yesterday, and to help encourage users, Hornet is offering free premium memberships to all new users for November and December.

(Daniel Villarreal contributed to this report.)

7 Important Facts About Gay and Bi Men Who Suffer From Eating Disorders
These 5 Video Game Characters Illustrate the Evolution of Trans Representation in Gaming
'The Queer Frontier': 5 Things You Didn't Know About the (Super Gay) Wild West
We Asked a Gay Proctologist to Answer All Your Scariest Questions
English