I Submitted To A Foot Fetish Dom

Unicorn Booty contributor Daniel Mikelonis spent an evening with a professional foot dom. Here’s his tale (with video of him being dominated below).

We go over the safe-word for this session — it’s “France”.

“I name my safe-words after countries that humiliated themselves,” he says. “My other favorite one is Canada.”

Before meeting, we agree to digitize his face and disguise his voice to protect his identity and that of his clients. It sucks, but foot domination or any kink practiced between two consenting adults carries such a stigma that the dom worries about losing his day job.

First, I put on a blindfold and in hindsight, this makes the session easier. Not seeing him puts my focus on the sensations, rather than the person inflicting them.

The dom then rests his feet upon my back, using me as his living ottoman. He says his clients enjoy getting treated like pieces of furniture. They love it when the he props up his feet and calls friends, reads a book, acts like they don’t exist. 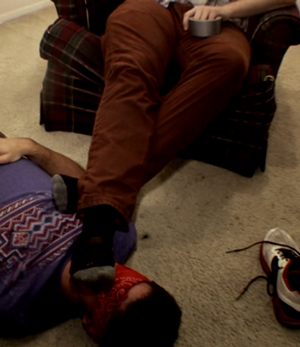 This forms my last clear memory. The next twenty-odd minutes pass in an indistinct blur: I untie his shoes with my teeth. The dom kicks off his shoes, pressing his sock-clad feet onto my mouth and nose. As my nostrils fill with a vinegar-sick smell, I concentrate on speaking loud enough for the camera to hear.

While subsequently removing his socks (also with my mouth), I accidentally bite his foot. He slaps me. I try thinking up a quip about this, but can’t.

Then, the distinctive ripping sound of tearing duct tape fills the air. He presses a piece over my mouth, covers my nose with a sock, pinches my nostrils closed, counts to ten. When I’m finally allowed to breathe, it smells like a Famous Footwear took a shit.

When I leave the dom and eat pizza and drink beer four hours later, I still taste and smell that damned scent — it sticks with me all day.

We now reach the final technique, the dom tells me, and suddenly things suddenly seem unendurable. Yelling “France!” seemed laughable before, but upon hearing that he wants me to lick, kiss or suck his feet, exhaustion hits me that moment and I exit the submissive mindset altogether.

“I don’t really wanna do that, dude,” I say. He’s feeling gracious though: he lets me off by giving his foot a light peck.

Concluding the session feels like coming down off of acid. Slowly my sense of self re-assembles, though I don’t feel completely present the rest of the day.

While I can go through my life without experiencing foot domination again, I can at least understand some of its appeal.  How odd that so many people have to hide this small sexual inclination (and so many others) out of fear of getting labeled as a deviant, getting fired or ridiculed, living in a constant state of stress.

My personality consists of an awkward bundle of anxiety and neuroticism. While driving towards the apartment for filming, I worried whether my headache indicated brain tumors and whether everyone at my work wanted me fired. Once the foot dom started working me over though, the worries vanished. The only thing I focused on became getting through the next moment. It was freeing in a way.

A transcript of the full interview with the foot dom is below. It has been slightly condensed and edited for clarity.

DANIEL MIKELONIS: One thing I’m interested in is how you got into this. What made you want to go out and put your feet on people?

DOM: It all started about this time last year. I saw a TV documentary, the kind that seems like a modern-day freak show that masquerades as an informative documentary.  [It was about] a guy with a foot fetish, and he would pay people to come over, and some people did it for free. They would use him as a foot stool, and he would keep these archives of their socks, and video footage of their time together. I saw it, and I think that probably planted the seed in my head. At the time I didn’t think I would end up doing this.

Once I graduated college and my job was allowing me to pay for my normal expenses but wasn’t quite letting me be as loose with my spending on the weekends like I wanted to be, I decided to get a second job, and I didn’t want to do Uber.

So instead of driving strangers around-

I put my feet in their mouth.

How do you feel about what you do? Is it just a job like driving for Uber, is it something you’re into, or is it just something other than that?

How do you convince these strangers that you’re going to take care of them, and show them, “Hey you can trust me”?

I start off by having a very honest and open dialogue through email. I make it professional; I make sure everything’s grammatically correct, at least for the most part. I invite them to meet me at a coffee shop or some public kind of place to talk about what their boundaries are, if they’re comfortable talking about that on a patio or something, not where everyone is. But personally, I want to get to know who they are too before I invite them into my home. It’s just something to make sure that this is something that they want. [They want to] make sure that I’m not some sort of psycho, and I like to make sure that they’re not some kind of crazy who’s going to do something crazy to me, or that I’m not going to be crazy to them, you know?

Is that something that’s happened before, where someone’s done something crazy where  you’re like “Woah, I need to get this person out of my house, I’m not comfortable”?

No, that’s not happened, and thank god.

So once you’ve got a client comfortable enough to come into your home and go through a session with you, what is your mindset like when you’re conducting the session and you’re bullying them with your feet?

It definitely requires a shift in mindset. I am not like that when I interact with people on a day-to-day basis. I definitely have to go into a different mode, or else if that was how I treated people on a daily basis I would have no friends.

“This guy came over to our party last night and started shoving socks in people’s mouths! Worst party guests ever!”

Yeah, that wouldn’t go over to well at parties. Absolutely not. But it goes great for foot domination sessions!

Basically, I shift mindsets. It’s not always immediate, I don’t immediately start going into hard domination. I like for it to kind of naturally flow and ramp up, because if they want to get a 30-minute session it kind of requires me to [begin with hard domination]. It’s a little bit more awkward. I definitely prefer to have at least an hour with a client, so that way it can have a natural progression to it. It seems to be more of a build-up of domination, and I think it’s more natural that way too. If we are having this frank conversation about what their boundaries are, and what the safeword is, and then suddenly I do a 180 and start treating them like shit, it’s a little bit jarring. Also they can’t quite take it seriously, and it’s harder for them to get into the mindset of being submissive. 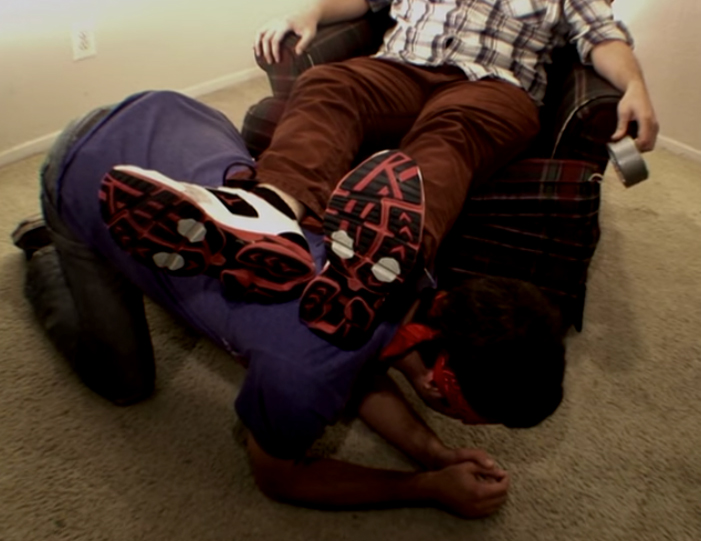 As you see a client a repeated number of times and you get to know them better, do you find that the intensity of the sessions ramp up as well? Like, at first are they like, “Kick me a little bit!” and then they’re like, “Do only hardcore stuff!”

Well, it depends on client to client. There are definitely some clients where that is the case, and other times there are clients who want me to ease up this time. They say, “Oh, this time I’m not really as interested in that,” or it just doesn’t naturally occur that way. Sometimes they’ll just massage my feet and we’ll have a nice conversation, because I’m not feeling the domination and neither are they that day. It’s a case-by-case basis and it’s different every time.

So you keep things foot-centric, you say that there’s no things that are traditionally considered sex going on. There’s no touching genitals, no butt stuff, so does that make what you do technically legal, completely?

I’ve done some research on it and what I’ve found is that that seems to be the case. If you don’t make contact with genitals or anuses – weird word to use.

So how has this type of work affected your own life, is it something that you have to compartmentalize and forget when you go out on the weekend and party or go to your day job, or is it something where you’re like “Okay, this is part of who I am all the time”?

Well, I definitely use discernment in who I reveal this to, note why I am being blurred out right now. As far as my close friends go they all know that I do this. I have a roommate, so I have to speak with my roommate and say, “Hey, I have a client coming,” and we plan ahead of time on how we’re going to make that work because it’s clearly not going to work if we have my roommate who’s cooking lasagna in the kitchen. So we have to work that out. I compartmentalize it to some extent, but I don’t reject the fact that that’s what I’m doing in my life.

How has it affected your personal life when it comes to say dating and sex? Has it changed the way you see your partners or people you’re in a relationship with?

But it did change the way I perceive feet, honestly, because I would ask my clients “What do you find attractive about feet?” I don’t quite understand it because it’s not my thing, and now that I’ve kind of gone into this world a little bit I’ve started to see what makes a foot attractive and what about a foot unattractive. Like, now I know “Oh, I wanna suck those toes but I wouldn’t wanna suck those toes.” So now I can kind of empathize more about what is found attractive in that fetish community.

Kink at Pride: The Ongoing Discourse That Needs to End
Elska Magazine Gets Up Close and Personal With Toronto's LGBTQ Community
We've Found the Perfect Gifts for Any Occasion, and They're From Pansy Ass Ceramics
31 Big-Name Actors You May Have Forgotten Are Part of the MCU
English