I Watched ‘Audacity’, The Latest Anti-LGBT Movie, So You Don’t Have To

Written by Dave White on September 5, 2015
Be first to like this.

“We really do love you!” reads the message written in icing on a batch of cakes recently shipped to LGBT groups from Oregon’s now-out-of-business Sweet Cakes by Melissa. Sweet Cakes, in case you’ve been ignoring the “religious freedom” frenzy going on out there, are the folks who declined to bake a wedding cake for a lesbian couple, because somehow it would violate their freedom to practice their religion. Then they got sued for it and lost.

But it’s true. They really do think they love you. More on that in a minute.

The cakes began showing up a few weeks ago at the offices of various LGBT organizations, chilled with dry ice and accompanied by a rainbow-colored DVD titled Audacity, the latest effort from New Zealand evangelist Ray Comfort. 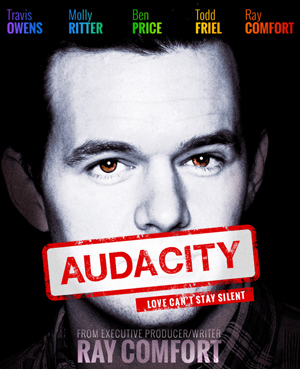 Comfort is a man who decided that his home country was too small a playing field, and what he really needed to do was bother America. So he teamed up with former-child-star/current-pain-in-the-ass Kirk Cameron, and created The Way Of The Master, a freakish series of evangelism videos (currently available to be viewed, in part at least, on YouTube).

I’m a glutton for this kind of extreme aesthetic punishment, so I sent away for my own copy of Audacity. It cost $4.99 and it arrived within 48 hours. I paid $12 to see God’s Not Dead in a theater, so this felt like a bargain by contrast.

God’s Not Dead  is the current standard-bearer for conservative Evangelical film, the shining example of what’s possible in terms of penetrating the mainstream market with shitty niche moviemaking. Audacity‘s ambitions are somewhat smaller; it’s essentially a teaching tool to be shown in Sunday School classes and Bible study groups, a short film meant for conservative Evangelicals to watch together and then discuss, like a really inept episode of Degrassi.

I watched Audacity, all 55 minutes of it, and here’s what happens: a young Christian man named Peter (Travis Owens) is burdened by the desire to approach all the gay people who cross his path so that he may “witness” to them. (For the un-churched, “to witness” is a verb that means to talk to non-Christians about Jesus until they give in or tell you to beat it.) In lieu of just being excellent at all the other activities the Bible demands that Christians perform regularly — feeding the poor, clothing the naked, tending to the sick — Peter carries a variety of gay-themed religious tracts in his back pocket, the kind that lovingly and gently remind queers about their future home in Hell. The tracts spend a lot of time in that back pocket because, in addition to avoiding all those other Christian responsibilities, he’s also too embarrassed to distribute his literature.

Peter has a lot of opportunities to fail at this hobby, with LGBT people lurking around every corner; meanwhile, he thinks about almost nothing else but the state of their souls, even as his anxiety paralyzes him, rendering him silent. Queers haunt Peter’s dreams at night, too, as evidenced by a nightmare sequence in which he fails to hand one of his tracts to two lesbians in an elevator that’s about to malfunction. Then the women fall to their deaths. Then he wakes up.

For no structural reason at all, this barely-there narrative is interrupted several times by clips of street interviews with random anonymous subjects, all conducted by Ray Comfort. The interviews consist of Comfort engaging in thoroughly illogical discussions with passersby, looping arguments that equate innate human characteristics, such as homosexuality, with moral choices such as adultery. Every person Comfort engages winds up telling him how thoughtful, kind, and, most importantly, right he is about gayness being a sin worthy of eternal damnation, and how it is exactly the same thing as cheating on your spouse.

The mission of annoying total strangers on sidewalks accomplished, the film shifts back to Peter’s heroic journey, part of which involves him thwarting a convenience store robbery, thereby saving the lives of a gay male couple in the process. When they thank him for his efforts, he whips out his tracts. One of the gays storms off in anger. The other listens, soon to become an ex-gay notch in Peter’s belt. The reparative therapy sessions in this man’s future are neatly side-stepped.

Finally, Peter convinces a lesbian friend that she needs to get with his version of Christianity, just before she’s involved in a car accident that nearly kills her. She smiles in her hospital bed afterward, happy to be alive, ready to dump her girlfriend, and pass out anti-gay tracts of her own. The circle of idiot life.

LGBT characters in Audacity are always on the defensive, asserting their rights to be left alone. But mostly they’re depicted as ingrates, accusing adorably awkward Peter of hateful intent, even after he saves them from gunfire. Conveniently, this allows for Peter to go wide-eyed and earnest. No, he doesn’t hate anyone, how could he? It’s just that his immense love for humanity means that he “can’t stay silent.”

The deck is stacked: Just look at this nice man, the film is saying. This is what Christians really are, gentle and misunderstood.  They’re not “haters,” they’re just trying to save you from all the robbers and car accidents and hellfires, and you faggots are distorting their grace-filled intentions because your minds are polluted with distrust.

“Everyone invents the God they feel comfortable with,” says Comfort in one of the street sequences. Everyone, that is, except for conservative Christians, who’ve got a direct line to perfect understanding of the comfortably right-wing deity they’ve invented. Audacity is by them and for them, a pat on the back they can’t wait to give themselves. The rest of you can get in line for their peculiar brand of love, or suffer the consequences.

A Look Back at TV's Worst Thanksgiving Episode of All Time
Follow These 10 Sexy Gay Yoga Masters on Instagram to Find Your Inner Chi
This 2015 Clip of Chris Hemsworth Is All the Proof We Need That He’s the Best Dad Ever
Tonga Mourns Polikalepo Kefu, an LGBTQ Activist Known for His 'Positive Energy'
English