Written by Kevin Farrell on February 10, 2011
Be first to like this.

Robert Broadus addressed a Maryland courtroom to testify against SB 166, which would provide marriage equality for the state’s LGBT citizens. And boy, is it a doozy. We can honestly say that we have never before heard such idiotic drivel spoken before in a court room. He invokes STAR TREK as proof that gay people must not be permitted to wed!

“There is no compromise on this issue. There is no tweaking this bill that will make it acceptable. It is poison. Some other issues were brought up about the science of the issue. If what I was taught is correct, from 7th grade, two individuals from the same species can reproduce. If you’re not in the same species, you cannot reproduce.”

Except that’s not true. Didn’t he read our exposé on Grolar Bears? Dozens of cross-species combinations are possible, and found in both captivity and the wild. Someone needs to watch Napoleon Dynamite again. Hellooooo, Ligers!

“Marriage is based on that idea.” (It’s not, obviously, or we wouldn’t be having this conversation across the world every single day lately.) “This is why, as people have alluded, people don’t intermarry with Not-Humans.”

“Also, if you pass this bill, you will set the groundwork that one day when artificial intelligence is that advanced, we will be considering whether or not people can marry their androids.”

“If anyone has watched Star Trek, you’ve seen the character Data. He was able – you laugh, but it’s true – he was able to generate a tear because he could feel emotion. If you knock down marriage between a man and woman now, if you say that any two people who love each other can get married, then you set that precedent.” 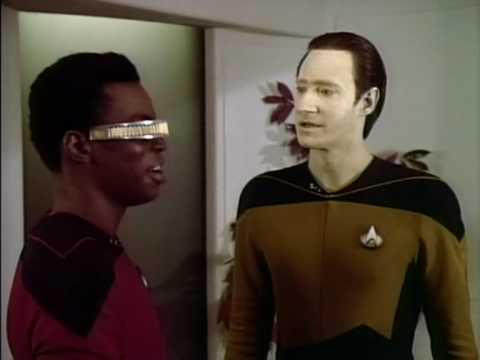 And at that point, my brain explodes from the sheer stupidity being verbalized by this man and I pass out. But much like the Nastyass Honey Badger, I eventually come back to consciousness and resume my writing.

Here’s the thing: Yes, America provides the right of free speech to all Americans. But this man is clearly misinformed and ignorant on the subject he’s pleading with the court about. We’re over here fighting for equal rights, and this guy is using his belief that the fictional television program Star Trek IS REAL to denounce gay marriage. The Star Trek-is-truth guy is telling us that we are less than him! Again, his exact words were, “If anyone has watched Star Trek, you’ve seen the character Data, he was able – you laugh, but it’s true – he was able to generate a tear because he could feel emotion.”

Oh. My. God. Honestly, the simplest thing you can do to ensure that marriage equality does in fact become law in Maryland, and every other state, is just go ahead and share this video with your family, friends and loved ones. Post it to Facebook. Tweet the heck out of it.

People, this is their argument against us. “People will marry their tear-producing androids.” This is all they’ve got. Because sanity, rationality, and the truth are on our side. And it’s really getting quite hard for bigots and homophobes to argue with that.

What do you think of Robert Broadus’ testimony?

46 Trans People Have Been Murdered in America in 2021
The Weird, True Story Behind 'Little Shop Of Horrors' (and Its Secret Lost Ending)
Let the Civil Rights Movement Help You Get Through Holidays With Republican Family
5 Gay Board Games From Years Gone By, Including the Ultimate Leather Daddy Monopoly
English