Being a starving artist sounds romantic but, in reality, comics creators need to publish their work and buy groceries. Those funny, insightful, and beautiful comics that pop up in your Facebook feed would disappear if the artists making them constantly had to focus on their day jobs instead. For those just starting out — especially working in a “niche” arena like LGBT comics — it can be a real challenge to complete your projects and get them out there.

I was the founding President of Prism Comics, a nonprofit organization dedicated to supporting LGBT comics, creators, and readers. In 2005, just two years after its inception, Prism awarded the first Prism Comics Queer Press Grant to Shirtlifter creator Steve MacIsaac, to help him continue his series.

Even though I’m no longer a board member at Prism, I have been delighted to see that the Grant has been an annual event.

At the end of 2015, Prism crowdfunded an anthology project to benefit its Grant program, called Alphabet, and the project is making its Comic-Con debut this weekend. Co-edited by Tara Madison Avery and Jon Macy, this hefty hardcover volume is quite a sampler of what’s going on in the queer comics scene, from both established talents as well as up-and-comers.

Unicorn Booty: What is the Prism Comics Queer Press Grant?

Tara Madison Avery: Every year, Prism awards a cash grant to an up-and-coming LGBTQ comics creator to help them bring their work to a broader audience. Sometimes that means publishing a book; other times that could be building a professional-looking website to showcase a webcomic or any number of things.

Prism is currently the only organization in North America which provides a grant to aspiring creators.

How did the idea to do Alphabet, an anthology of QPG applicants/recipients, come about?

In 2014, at the Alternative Press Expo, we awarded our tenth annual grant. Jon Macy and I thought an anthology featuring past grant winners and some outstanding applicants who may have just missed out on the grant would be a great way to commemorate ten years of supporting queer comics creators.

What has been the most rewarding part of working on Alphabet as an editor?

Giving many of my favorite cartoonists a chance to reach audiences outside of their regions and directing them to the Queer Press Grant application process. Cartoonists such as Ajuan Mance and Christianne Benedict deserve to reach a national audience.

How did you and Jon go about picking submissions/inviting contributors to participate?

First, we reached out to all the past Grant winners, and most of them were able to contribute. Secondly, Jon, who has been in charge of the grant process for several years, reached out to some of the more promising grant applicants in recent years who may have missed taking home the grant by a hair. Then we rounded out our roster with friends of Prism, including well-established veterans such as Howard Cruse and Jennifer Camper and an array of young cartoonists some of whom never had their work in print before.

The idea was to cast a wide net to get the most diverse group of cartoonists as possible to represent all corners of the LGBTQAIU community.

Alphabet is over 350 pages long! What kind of work will people find inside the book?

The content is a diverse as our roster of cartoonists! We have autobiographical pieces, op-ed style comics, flights of surrealism, dry humor, slapstick comedy, and even (gasp!) a superhero story or two. And every bit of it is 100 percent queer! 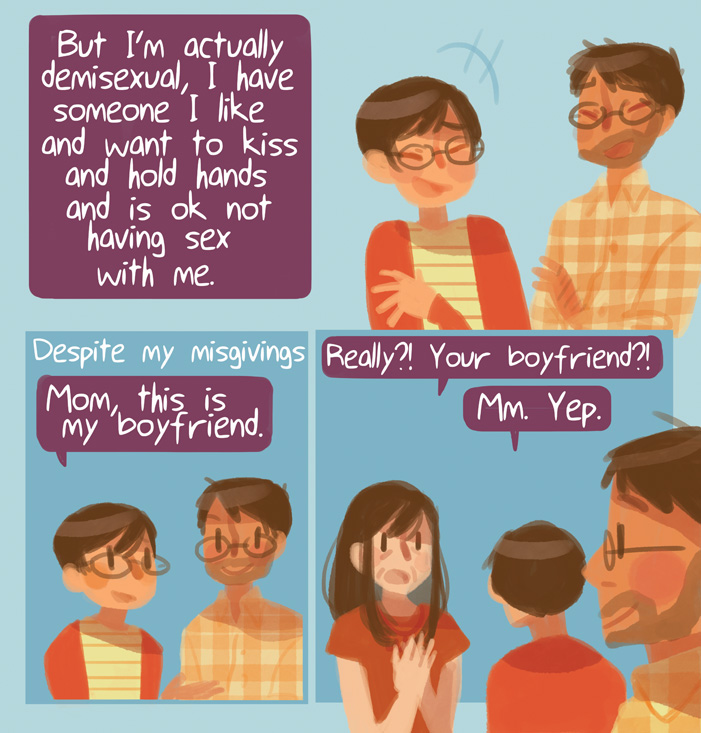 Alphabet is currently available from the Prism Comics website.

These 15 Amazing Artists Will Keep Your House Queer AF
Don't Judge Your Relationship's Success By Its Longevity, and Quit Searching for 'The One'
Fandom and the Internet Are Responsible for the Existence of Queer Anime and Manga
Dream Vacations Only: 5 Quirky Airbnbs From Around the World
English