INTERVIEW: We Play With Trixie Mattel, The First Drag Queen Of Gayming

This post is also available in: Deutsch Español Português

It’s Trixie Mattel world and we’re all just accessories. You may remember her from RuPaul’s Drag Race season seven (#justicefortrixie #neverforget), but she also starred as the cosplay contest emcee at this weekend’s GX3 gaming conference.

We got to sit down and have a little chat with the uber-talented and proud gaymer. While she’s definitely not the first video game playing drag queen, she’s one of the first to wear the gaymer badge proudly, incorporating it into her drag work and her interview with us…

Unicorn Booty: First things first, what are your thoughts on the term Gaymer? Is it relevant or is a gamer is just a gamer?

Trixie: I believe it is relevant. It lets everyone out there know that there are gay gamers. We really do exist. Also they should acknowledge us because gay gaymers spend a good amount of money and time on video games. Disposable income and all but gaming also offers a good escape from reality which is beneficial to some gaymers.

What sort of games are you playing right now?

I’m playing Fallout 4 right now, but I just started it cause I know it’s one of those games that suck you in and make you shut out the world. I’m also playing Pokémon Alpha Sapphire and the new Smash Brothers for the 3DS. Peach and Zero Suit Samus kick ass.

What starter Pokemon did you choose the first round?

The first time I played with Squirtle in Pokémon Blue, mainly cause it was cute. But right now I go more for the grass type. I play the long game. I like going for sleep or paralysis instead of just going for the powerful attacks right away. The enemy can be tough but can’t do anything if he’s asleep. I always try to keep like a Butterfree around.

Then Generation Six and Fairy types happened messing everything up. But obviously Fairy types are my favorite type — duh! Klefki is my favorite Pokemon out of them. The fairy types overall have great designs. Come on, Florgess? Total Drag Queen. And Gardevoir? Another Drag Queen.

If Trixie were to have a game, what would it be about and what genre would it be?

Ooh, it would be super gay. It would be open-ended and sorta like that game Top Girl Dress Up. I just dress up cute and go out with my boyfriend. It would also have a part where you put together a choreography and perform. Think of it as that late 90’s Spice Girls Playstation game. Oh it was so bad but I love the Spice Girls so of course, I had it.

By the way, your Princess Peach cosplay was amazing.

Thank you, that was for the promotion of the Neverland: The Arcade Party in Chicago. It was shot by Adam Ouahmane also from Chicago. 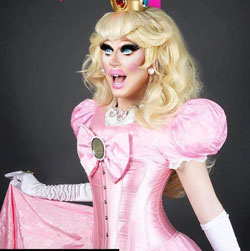 Do you draw inspiration from video game characters as well?

Definitely. I love strong and sexy females. I draw a lot from video game and cartoon characters, Lola Bunny, Peach etc. Peach specifically cause not many people believe that she is tough. She is not the princess who’s “Oh come save me!” Like in Super Princess Peach she takes action and is the one doing the saving.

Another is that probably they see her as weak because of how pink and “girly” she is. But that is what she chooses to be. Femininity is her options and she owns it. Funny thing too, when I dressed up as Peach I had to wear less makeup than what I normally use. Like turning this into a cartoon character takes less makeup, imagine that.

What male character do you think would pull off a great Trixie impersonation?

Ha! Um… Leon Kennedy from Resident Evil! Yaas gurl, you know that all that he does in that game is shoot and flip his hair.

What character from a video game you think is secretly gay?

Chris Redfield from Resident Evil. He’s just so big and overly manly that it kinda gives you the vibe that he’s maybe overcompensating a bit. Like, it’s one of those guys that’s hiding, and you want to bend him over and teach him how it is. Or maybe I’ve had too many fantasies about him. That part at the end where he is punching the wall… Oh gurl.

What do you think that the gaming industry needs to better represent the LGBTQ community?

I think it needs to reflect real life a bit more. We are all different and that’s hard to do but it’s worth a try. Yet there are games out there where everyone is bisexual and that is not necessarily true in the real world. But it is still great to see games like Fallout 4 where you can customize your character and make it to be whatever you want to be.

How has gaming impacted you as a person?

Video games have always been a wonderful part of my life, growing up and right now. They are the only thing I do for leisure, a time where I’m not doing something to make money or to promote myself. It’s great to be another person for a while. It makes me feel better about my life when I return to it. Like when I do drag, I love it. But it’s great to come back to being me. You see your everyday life differently after being disconnected from it.

What do you think comes out of a Unicorn Booty?

Thank you Trixie for always being amazing. Any last words of wisdom for your gaymer fans out there?

Walkthroughs are for quitters!