It’s Been 225 Days Since Prop 8 Was Ruled Unconstitutional 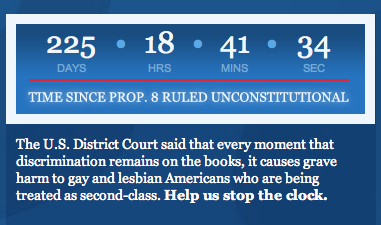 Prop 8, as you already know, was judged to be unconstitutional last year. What you may not realize, it that it’s been 225 days since that decision was made. So why are the constitutional rights of LGBT Californians and Americans still being violated.

“This Court should lift the stay of the Order of the district court enjoining enforcement of Proposition 8, and allow loving and committed gay and lesbian couples in California to marry while the challenge to the judgment by Proponents proceeds to its conclusion. The mandatory requirements of a stay are plainly not met, and the circumstances that existed at the time the stay was first imposed have now changed materially against any arguable justification for a stay.”

“If the stay were lifted here, Proponents would suffer nothing but the psychic harm they alleged in living in a society in which loving couples of the same sex may be married, joining the thousands who married before Proposition 8 and who remain married today.”

“A cascade of contingencies—a possibility that the California Supreme Court might provide the ‘authoritative determination’ Proponents seek, tethered to a chance that such a state-law determination might suffice to confer Article III standing on Proponents, which then opens the possibility that this Court could adopt Proponents’ arguments on the merits—is not the type of “strong showing” of a likelihood of success that Supreme Court precedent remotely demands. Indeed, given the significant hurdles now before them, Proponents have made no showing, let alone a strong showing, that they are likely to succeed at the end of the day.”

“If, as the Attorney General [of the United States] has determined, heightened scrutiny is the appropriate standard of review, Proponents have no likelihood of success on the merits. They do not because they cannot seriously defend Proposition 8’s state-sponsored discrimination under that standard.”

“There can be no serious dispute that denying Plaintiffs and other gay and lesbian individuals throughout California their fundamental right to marry for an additional year constitutes a ‘substantial injur[y]’ that should weigh heavily against maintaining a stay. And the weight against continuing such provisional relief is particularly heavy here where the Attorney General of California has confirmed that lifting the stay will bring no harm to California or its citizens.”

“Proposition 8—and the stay that allows it to remain in force—is causing great damage. It is not merely deferring wedding dates, as Proponents suggest. For those near the end of life, it is denying the right to marry outright. But beyond the damage done to loving couples’ wishes to marry, Proposition 8 carries an unmistakable message—transmitted and enforced by the State and tolerated by this Court—that gay men and lesbians are members of a class of persons unworthy of the fundamental right of marriage and the “protection of equal laws.” Each day that California’s constitution stigmatizes and disables Plaintiffs and others like them, it inflicts great and lasting damage. That constitutional injustice must not be allowed to continue.”

Please add your name to the petition to stop this discriminatory and unconstitutional law immediately by clicking here.

5 Queer Black Musicians Who Are Changing the Game in 2022
How Frankie Goes to Hollywood's Gay, Controversial Music Videos Shaped the '80s
'Summer Penis' Is Real, So Look Forward to a More Prodigious Pecker
Being HIV-Positive is an Ongoing 'Coming Out' Process With a Powerful Impact
English