Written by Kevin Farrell on February 8, 2011
Be first to like this.

On Monday, gay and lesbian couples across the country will arm themselves with a video camera and march down to their city halls to request a marriage certificate from the city clerk’s office. There won’t be picketing, signs, or marching – just a simple request for a marriage license caught on film.

Videos of the simple act of protest will be shared online with millions, but almost more importantly, straight couples in line to get married will be exposed to the discrimination currently affecting millions of Americans.

Nick and Kevin from Unicorn Booty will be participating in the Seattle protest – either filming or attempting to get married ourselves – and we urge all of our readers in committed relationships to get out there and use this opportunity to make an eloquent point of protest. Marriage inequality affects countless Americans daily, denying us rights, and labeling our families as less than those headed by heterosexual couples.

A full list of city’s with participating couples can be found HERE. If you don’t see your city on the list, all the more reason for you to get your booty down to city hall and participate.

Straight from the horses mouth at Equality Events:

Thank you for your willingness to take personal action in support of marriage equality for same-sex couples. You are joining an annual Marriage Equality USA (www.marriageequality.org) tradition which “marries” Valentine’s Day’s focus on love and commitment with February’s Freedom to Marry month activities intended to raise awareness and educate the public on the importance of securing marriage equality for same-sex couples and their families. This year we are partnering with GET EQUAL (www.getequal.org), California Faith for Equality, Coalition of Welcoming Congregations and other grassroots leaders around the country.

Our action is simple yet profound. It can be done with as few as just 2 people and be organized in any locality around the nation (except CT, DC*, IA, MA, NH, and VT where people are encouraged to take their license to their local Federal Building IRS office and ask for the marriage tax penalty). The event consists of encouraging couples to “get engaged” for marriage equality by asking for marriage licenses at their local marriage counters. Nothing better highlights the state-sanctioned discrimination against same-sex couples by having long-term same-couples, often with children and grandchildren in tow, turned away from the counter that serves every other heterosexual couple that approaches – no questions asked.

Though this is a demonstration in support of civil rights for LGBT people, please understand that this is not an adversarial event. Many of the county clerks are personally supportive of marriage equality and some of the counties have passed resolutions in support of marriage equality. Also, many of the different-sex couples getting married that day are also personally supportive – and we aren’t standing against their happiness – we celebrate it with them and simply seek to join them in that happiness ourselves. We don’t block their way and we offer them heartfelt congratulations. People who engage in this activity agree to conduct themselves with dignity, friendliness and not to raise their voices or act impolite to anyone. The county clerks are not able to change the law, they are carrying out the laws as enacted by the State legislators – not their own personal conscience – which is often at odds with their required acts to turn us away.

This is a solemn but dignified action – it is in the tradition of the civil rights lunch counter demonstrations – it is not about making a lot of noise, it is about peaceably rendering visible the legal discrimination that happens at that counter everyday. If same-sex couples never ask for the licenses, the clerks’ offices and the public don’t ever have to think about the 1,138 federal and hundred of state rights that any man and woman can just step right up and receive but that gay couples are categorically denied. Straight ally couples can join in the counter action by asking for the license – and then giving it back – stating “It isn’t fair that same-sex couples can’t be married too. So we aren’t going to engage in this paperwork today, thank you anyway.” Others can just stand in supportive witness to the couples making the request. Supportive clergy can attend and offer to conduct a spiritual wedding ceremony to show their support and report to the county clerks that the government should not be implementing one religious view over another and that all people deserve to be treated equally by their government. 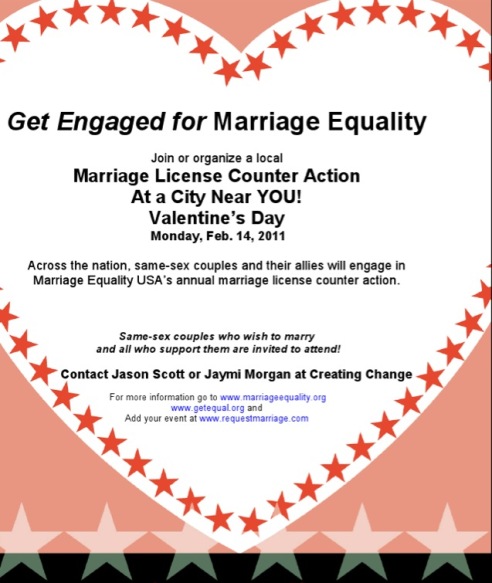 It’s OK to be nervous or scared about participating. You wouldn’t feel that way if it wasn’t important. But we’re stepping up and doing it, and we hope you will too.

Who’s with us? We’ll share the videos produced by anyone participating here on Unicorn Booty. Send them our way at tips@unicornbooty.com/.

Putin Signs Constitutional Amendment Banning Same-Sex Marriage in Russia
Help Spread the Gay Agenda With These LGBTQ Children's Books
This Artist Has Redrawn Snow White's Seven Dwarfs as Drool-Worthy Pin-Ups
Meth: Why Is It So Alluring to So Many Queer Men?
English