Written by Alexander Kacala on March 5, 2018
Be first to like this.

At the 90th Academy Awards, there was an ongoing theme of “Representation matters,” and this was best communicated by the repeated visibility of the LGBT community through the ceremony. So we rounded-up eight LGBT Oscar moments from last night so you know what to dish about at work this morning.

The LGBT community was well represented and was vividly on display at last night’s Oscars. From transgender history being made with Chile’s win for Best Foreign Language Film to Adam Rippon’s scorching hot red carpet look, here are eight LGBT moments from last night’s oscars.

Here are 8 LGBT Oscar moments you have to know about:

LGBT history was made at the Academy Awards Sunday night when A Fantastic Woman nabbed the Oscar for Best Foreign Film. Directed by Sebastián Lelio, the Chilean drama follows a trans waitress and singer, Marina Vidal (played by Daniela Vega), whose grief over the sudden death of her lover, Orlando, is compounded by the scorn she experiences from his family.

THE OSCARS: Daniela Vega is the first openly transgender person to ever present at the #Oscars. pic.twitter.com/YEtaFvmS5q

The star of A Fantastic Woman, Daniela Vega, also made Oscar history on Sunday night, becoming the first openly transgender person to present at the ceremony. Vega introduced a performance by Sufjan Stevens, whose song “Mystery of Love” from the Call Me By Your Name soundtrack was nominated for Best Original Song. “Thank you so much for this moment,” she said before introducing Stevens.

Disney/Pixar’s Coco took home the Academy Award for Best Animated Feature. Producer Darla K. Anderson received her first Oscar. Onstage, Anderson called Coco “proof that art can connect and change the world, this can only be done when we have a place for everyone and anyone who feels like an ‘other’ to be heard.” She ended her speech by thanking her wife. She said: “This is dedicated with enormous love to my gigantic interwoven family, and most especially my wife, my rock, Kori Rae.”

Backstage, when asked if the LGBT community might also be represented in future films, Anderson responded, ”That would be a dream and we are thinking about all kinds of things like that.”

Adrian Molina, who also won for Coco, thanked his husband, too. He said: “Love and thanks to my family, my Latino community, to my husband Ryan, each for expanding my sense of what it means to be proud of who you are and where you’re from.”

4. James Ivory wins for Call Me By Your Name.

Out screenwriter James Ivory won the Oscar for Best Adapted Screenplay for his adaptation of Andre Aciman’s novel Call Me By Your Name. At 89, he’s the oldest Oscar winner ever and he took the film’s only award.

When asked how it feels to be the oldest winner ever, Ivory replied, “Imagine how it would feel. 90 years for anything that you would do is extraordinary, but to be here having won the Oscar at that age just seems like a hiccup in nature, possibly, something like that, but it feels great.”

Of why he took interest in the film, Ivory added, “The story had a good amount of personal relevance for me.”

"It all means nothing if you don't stand up for something…" @common and @andradaymusic bring us together with "Stand Up For Something" from Marshall. #Oscars pic.twitter.com/lb7AN2bcaA

Joining Andra Day for a performance of Marshall‘s “Stand Up for Something,” nominated for Best Original Song this year, rapper Common spit a verse with a thinly veiled message to President Donald Trump. He ended his verse with, “When they go low, we stay in the heights. I stand for peace, love and women’s rights.”

During their performance, Day and Common were surrounded by activists from various organizations, including the Standing Rock Youth Council, the Planned Parenthood Action Fund, Black Lives Matter and #MeToo movement. Transgender activist Janet Mock, who also walked the red carpet, was one of them. 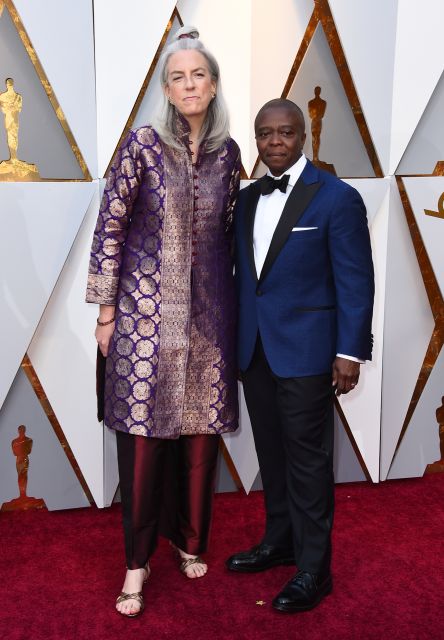 Yance Ford made history as the first openly transgender filmmaker to have a film nominated, Strong Island, for Best Documentary. He was also featured in a moving highlight reel about the importance of representation and inclusion in Hollywood.

“If my making history makes it easier for a trans kid at home somewhere to feel more at home in their skin, then I’m so excited about that,” he said. “If I can use this moment to remind folks that trans people are subject to violence at greater rates than any other group in this country, I’m happy about that. If I can help one family embrace their child and not displace them and throw them out, I’m happy about that.”

The “In Memoriam” segment included Debra Chasnoff, an Oscar-winning documentarian who pioneered educational films to promote acceptance for the LGBTQ community.

Chasnoff’s first film, which she produced in 1984 with her partner at the time, Kim Klausner, was titled Choosing Children. It profiled six households headed by same-sex parents who were raising children through adoption, foster parenting, previous relationships and donor insemination.

“I think that very first film has done more to change the world than anything else I could possibly do,” Ms. Chasnoff said in a 2013 interview on blogtalkradio.com. “It’s no longer assumed you can’t be a parent if you’re gay.”

She passed away in November 2017 from breast cancer.

The U.S. figure skater arrived at the 90th Academy Awards wearing a deconstructed Moschino tuxedo designed by Jeremy Scott with a black leather harness underneath. This is how a famous, gay stylish man should dress in 2018.

What LGBT Oscar moment was your favorite? Tell us in the comments or on Facebook!

From Coming Out To Holding A Protest, Here Are Five Gay Kisses That Made A Political Statement
The Police, Disguised as Patrons, Attacked Queer People at the Black Cat Tavern
From the Science of Sex to Nazi Destroyers, 11 of the Coolest Queer People in Science
Read This Heartbreaking Gay World War II Soldier's Love Letter
English