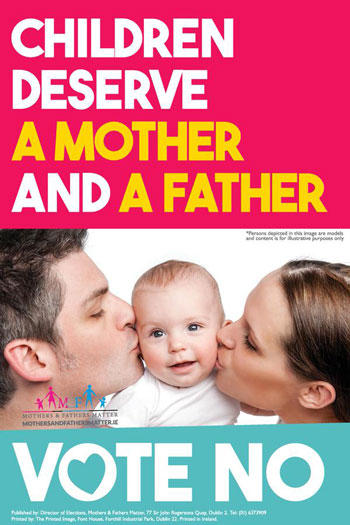 On May 22nd, Ireland will become the first country to vote on whether or not to legalize same-sex marriage. According to multiple opinion polls conducted by the Irish Times between April 2014 and March 2015, over 70 percent of voters said they would vote ‘Yes’ on legalizing same-sex marriage.

In support of the ‘No’ vote, campaign group Mothers & Fathers Matter created a family friendly poster using a stock photo. The stock photo depicts a mother and father kissing their child on either side of the cheek under the statement “children deserve a mother and a father.”

On Thursday May 7, the couple depicted in the photo released a statement via Amnesty International saying that they are actually supporters of legalizing same-sex marriage.

“We were surprised and upset to see that the photo was being used as part of a campaign with which we do not agree,” the couple, who declined to give their names, stated. “We completely support same-sex marriage, and we believe that same-sex couples’ should of course be able to adopt, as we believe that they are equally able to provide children with much-needed love and care. To suggest otherwise is offensive to us, and to many others.”

The couple found out about the poster through Facebook when a friend of theirs, who knew their stance on same-sex marriage, alerted them. They originally posed for photos for a photographer friend of theirs not knowing that a group with completely different views would use them.

Though the campaign group states that it does not matter what the opinion of those depicted in the photo is, it completely discredits this group’s attempt to sway voters. A ‘No’ campaign group using the photo of people who do not support their message and beliefs is laughable. It completely reduces the credibility of the group.

It is outstanding that the couple in the photo came out and expressed their disgust with the group and the poster. They chose not to silently be used as an example of someone’s hate speech. With the couples confession the poster has been relegated to the status of an everyday internet meme.