Man Ties Helium Balloons To Lawn Chair And Flies Away 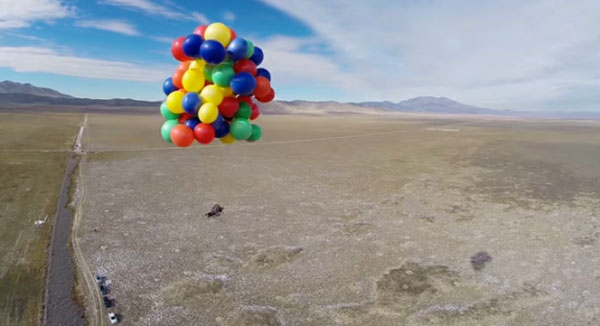 Extreme skier and skydiver enthusiast Eric Roner recently tied 90 balloons to a lawn chair, rose to 8,000 feet into the sky, and then started shooting off the balloons with a rifle. He caught the entire escapade on GoPro cameras.

It ain’t exactly Disney’s Up, but it is interesting to watch, especially considering that GoPro has kinda become the standard in such extreme videos. Other adventurers have used GoPros to speed through an Olympic luge, hang out with Great White Sharks, and skydive into active volcanoes. Let’s hope we don’t ever get to see an extreme stunt turn into a GoPro snuff video.

20 Obscure Christmas Songs That Don't Suck
'Friday the 13th' Is So Much Gayer Than You Think It Is
17 Stories of Straight Guys' Gayest Moments Ever, Ranked by Hilarity
Here Are 5 Simple Hacks for Surviving the Holidays With Your Family
English