Nintendo President Satoru Iwata passed away on July 11 from a tumor in his bile duct. He was 55.

In tribute, the flags outside of Nintendo’s headquarters in Japan are flying at half-mast. 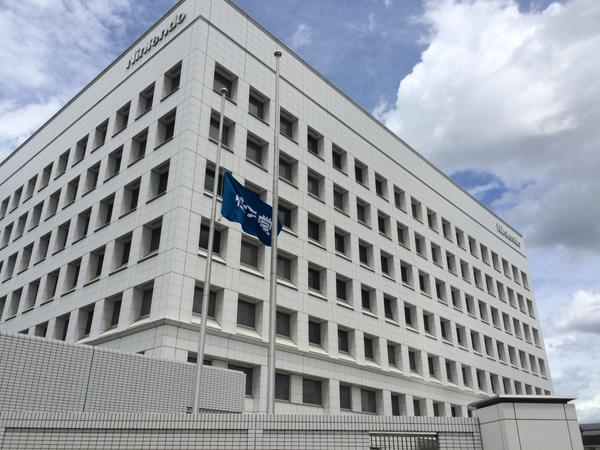 The Tweet reads: “This is the front of Nintendo headquarters. The flag is at half-mast because company President Iwata died. Without the media around, it is quiet. Again, I pray for his soul.”

The Twitter accounts of Nintendo of Europe and Nintendo of America observed a digital moment of silence on July 13, refraining from making any posts. And nerdy fan tributes are sprouting up on Twitter, Youtube, Splatoon, and anywhere else gamers can be found.

To many gamers, Iwata was more than just a corporate executive; he was one of them. The man simply loved games, and had a hand in developing many beloved titles, including Pokémon, Super Smash Bros. Melee, and Earthbound (Mother 2 in Japan).

He was also known for his generosity and humanity. In response to lagging sales, Iwata gave himself a hefty pay cut rather than lay off staff members. I can’t imagine the president of a major American company doing such a thing. In an investor Q&A, he said:

I know that some employers publicize their restructuring plan to improve their financial performance by letting a number of their employees go, but at Nintendo, employees make valuable contributions in their respective fields, so I believe that laying off a group of employees will not help to strengthen Nintendo’s business in the long run.

This was clearly a man who valued and respected his employees. He knew how much people mattered.

Iwata resisted the trend of many game companies to focus only on processing power and appeal to an increasingly narrow elite/extreme gamer demographic. While other consoles focus on brown-and-gray grimdark slaughterfests with edgy sex and violence, Nintendo games have always had a bright, colorful aesthetic, like a candy shop. Iwata took pride in this. To him, video games were meant to be inclusive. They were supposed to be fun for everybody. In 2005, he said:

The people the other companies are targeting are very limited to those who are high-tech oriented, and core game players. They cannot expand beyond that population. We are trying to capture the widest possible audience all around the world.

That attitude is part of what makes Nintendo games so great. They’re fun for everybody. You can play Wii Sports with your grandparents. You can play Mario Kart with your brothers and sisters (though I am forbidden from playing it in the presence of my older and/or younger relatives due to the alarming amount of profanity I utter in the process). While many video games can be played with other, Nintendo’s multiplayer tends to involve your actual loved ones sitting beside you; it’s much more fun to play Donkey Kong Country with your neighbors in their living room than to sit alone in front of a screen listening to a squeaky-voiced teen hurl homophobic insults at you over the internet.

And even when Nintendo does release a game with online multiplayer, it makes sure you’ll get to enjoy your experience without having to listen to nasty insults.

Other consoles have focused on hardware: speed, power, graphical capability, and so on. Nintendo, like Satoru Iwata, mainly cares about fun.

Iwata served as President of Nintendo since 2002, but his relationship with the company started long before then. In an interview on GameCenter CX, a Japanese television show about old video games, Iwata talked about how he started working for Nintendo:

In the year 1983, I entered my second year of employment. But I was not with Nintendo. I worked for a small software company outside of the city. Then, I heard Nintendo was planning to release a fun game console. So I visited Nintendo and told them, “I think I could program Famicom games, so please let me program for the Famicom.

He had already been making games for years, simply for the fun of it. He made his first games to entertain his friends on a little programmable calculator that could only show numbers.

Iwata’s father didn’t approve of his son’s foray into what was, at the time, a new, rather risky industry:

The first company I worked for was HAL Laboratory [the gaming company responsible for titles like Kirby’s Dream Land and the Mother series]. It was a tiny company. When I began there, I was one of only five workers. So my parents were vehemently opposed. For about half a year, my father didn’t speak to me. Although we did argue. [I didn’t give up because ] I had abnormally strong faith in the future… Confidence without any basis. Youth is a wonderful thing!

If you have a little time, watch the whole interview. Iwata’s warmth and pure-hearted love for games shines through. You also get to watch him play (and fail at) Balloon Fight, a game he programmed decades ago.

According to a statement released by Nintendo, Iwata will be succeeded by Genyo Takeda and Shigeru Miyamoto.

20 Obscure Christmas Songs That Don't Suck
Here's a Look at Some of Our Favorite 2021 Pride Month Photos
Queer Coming-of-Age Film 'Half Brother' Is Finally Available Outside of Brazil
'Don't Ask, Don't Tell,' a Dark Mark on America's Legacy, Was Signed Into Law 28 Years Ago
English