Last month, #MasculinitySoFragile trended on Twitter as users fired off a storm of Tweets about fragile masculinity.

What is fragile masculinity? It’s not the belief that men are bad or weak. Instead, it’s the belief that society’s attitudes regarding masculinity are bizarre and harmful. Society discourages men from asking for help or talking about their feelings or treating women as equals or eating fruit or speaking in anything other than a low monotone. To do any one of these things will get a man branded unmanly.

While society’s ideal man is an invulnerable one, the concept of masculinity is incredibly fragile. Though a Real Man is expected to wrestle a bear without hesitation, a typical man shrinks away from dancing at a party; he can’t pay another man a compliment without mumbling “No homo”; he can’t drink delicious red wine punch without changing its name to Mangria. That’s what fragile masculinity means, and that’s why Twitter was poking fun at it.

Many tweets focused on the way masculine fragility breeds broken relationships between men and women:

You can’t date a woman who gets paid more than you. #MasculinitySoFragile

80 yo patient couldn’t stay in room with wife who was writhing, crying in pain bc “it’s too much for me” #masculinitysofragile

Some Tweets poked fun at recent MRA tantrums (mantrums?) over pop culture, like the Men’s Rights outcry over Fury Road’s female lead, or the backlash against the all-woman Ghostbusters reboot.

#MasculinitySoFragile it feels threatened by an action movie with a Female Badass overshadowing the male lead.

#MasculinitySoFragile that your entire sense of self is compromised by the new female Ghostbusters.

#MasculinitySoFragile even films made by gay men about LGBT history are made to calm the jitters of straight male viewers.

#MasculinitySoFragile that when a biological male identifies as a woman, men feel the need to discriminate, abuse or kill her.

#MasculinitySoFragile we have to change things we view as girly somehow to a more manly version, ie, brosé, manbun, guyliner, manpurse etc

#MasculinitySoFragile that I ate one of Mrs. Stoner’s Luna bars and now I’m worried I might be emotionally available for my family.

#MasculinitySoFragile that men will question your heterosexuality for simply buying a rose gold iPhone.

Some tweets were downright heartbreaking, as men opened up about how society’s toxic ideals of masculinity had damaged their personal lives:

#MasculinitySoFragile that we even have fathers showing no love to their sons, instead they’re yelling in their ear about sports.

#MasculinitySoFragile I don’t hug my dad so nobody thinks im gay.

#MasculinitySoFragile that we are taught at a young age to never cry. To never show emotions. To never feel. To never need help.

#MasculinitySoFragile that you consider love to be weakness, and violence to be a sign of strength.

As the hashtag swelled to the #1 spot on Twitter, angry MRAs swarmed it like ants to a picnic. One charming gentleman decided to prove how totally not at all insecure he is by threatening to beat up women (or, as he wrote, because he is apparently a Ferengi, “females”): 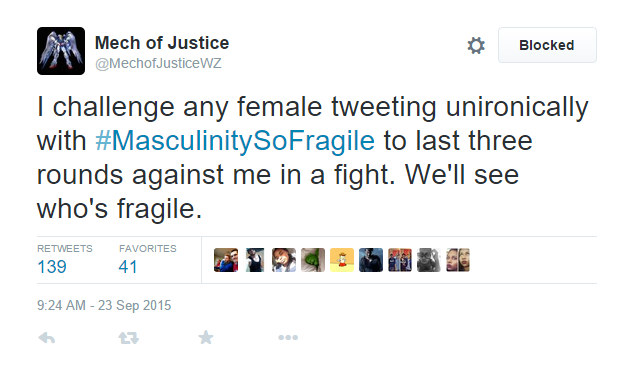 Unfortunately for him, he got a response from actress/kickboxer Pia Glenn: 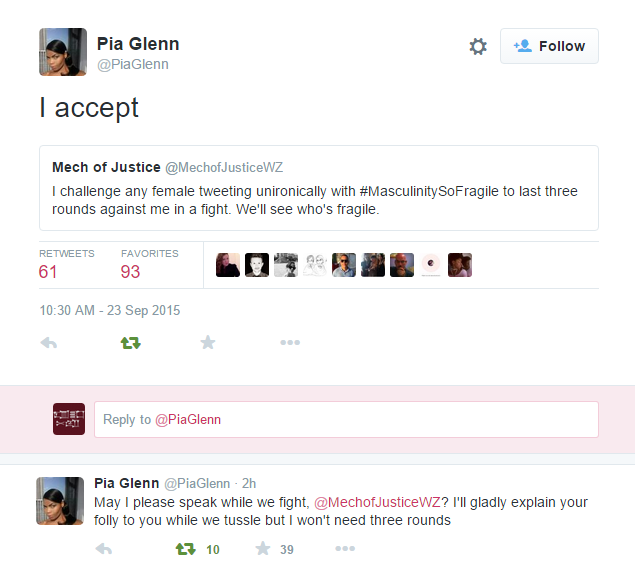 This interesting development sent Twitter into a flurry of excitement. How would @MechofJuticeWZ respond?

The answer? He didn’t. He was still very active on Twitter though, typing angry responses to other women posting on #MasculinitySoFragile. And yet for whatever reason (perhaps the fact that her acting resume lists her height as an even six feet) he did not respond to Pia Glenn’s throwing of the gauntlet. 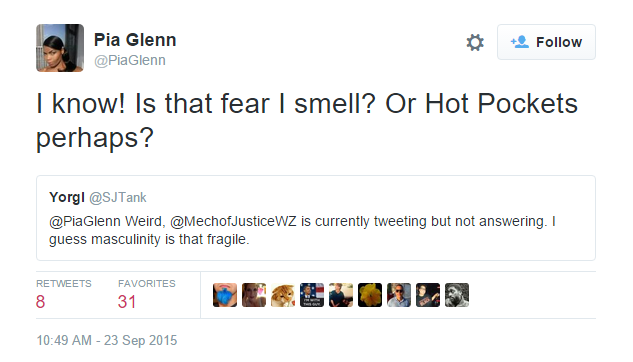 Finally, the meninist keyboard warrior responded to Glenn’s challenge. Indirectly. By replying to someone else. 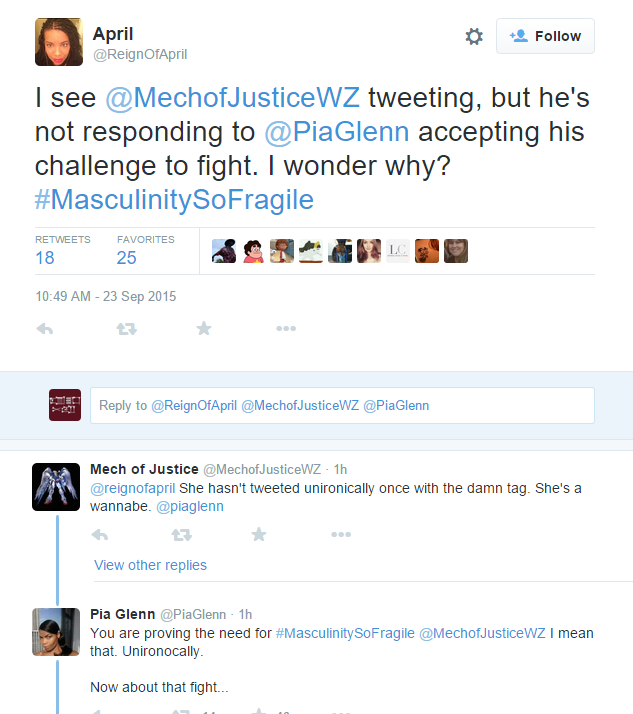 But his craven attempts at fleeing the fight did not escape Pia’s notice. 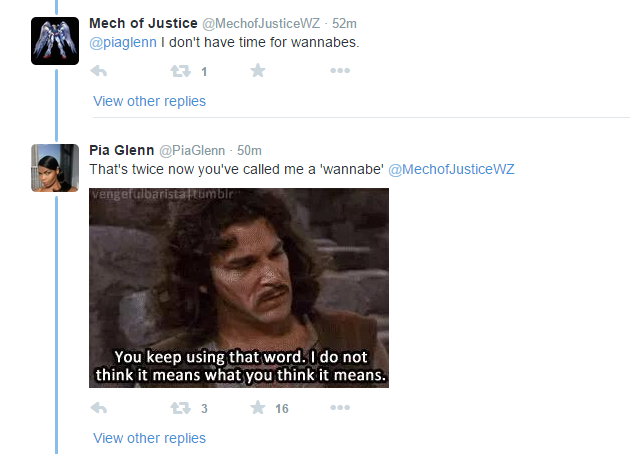 Still, Pia persevered, tweeting to #MasculinitySoFragile unironically so as to satisfy @MechofJusticeWZ’s rules of engagement:

When the brave coward did not respond, she attempted to goad him into battle: 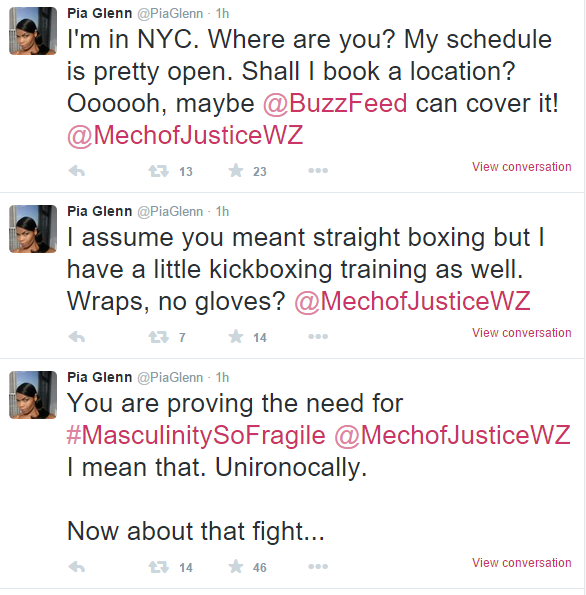 She offered him many opportunities to follow up on his word of manly one-on-one combat: 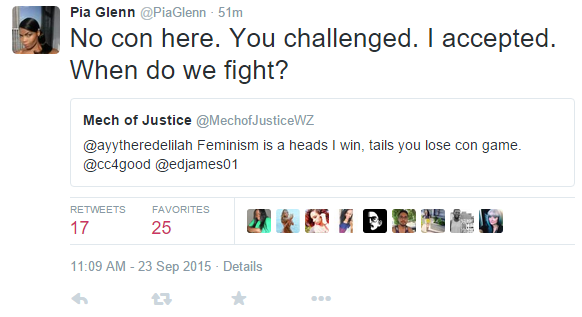 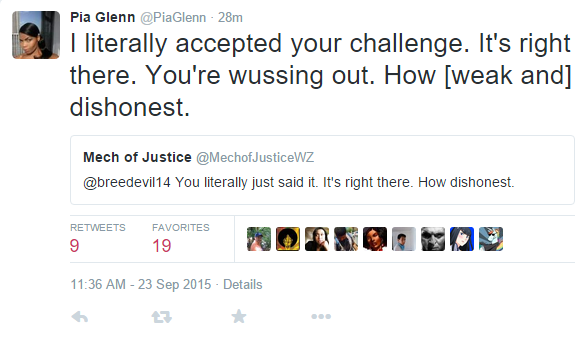 But eventually Pia Glenn was disqualified from the ring, apparently for being a Replicant:

Alas, it appears that the great Pia Glenn vs. Angry Twitter Bro fight, our generation’s version of the tennis match between Billie Jean King and Bobby Riggs, was not to be. Nor was the @MechofJusticeWZ vs. @WildCougConfess fight: 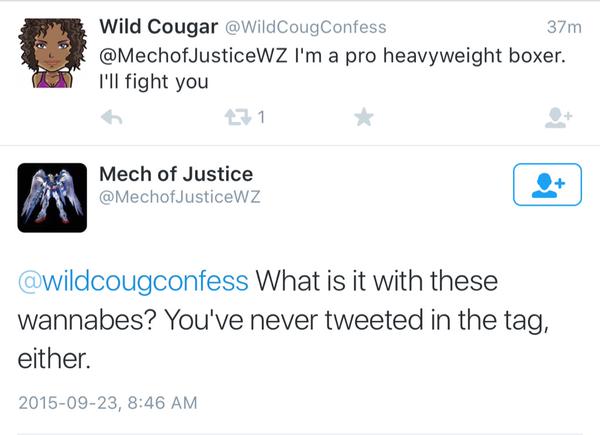 But let’s give him the benefit of the doubt. Maybe he didn’t scurry away from a physical fight with a woman because of fear. Maybe he was busy fighting a more important, more masculine battle, perhaps against a drug cartel, or ISIS, or the North Korean government, or…

Here's How to Throw Your Own 'To Wong Foo'-Worthy Strawberry Social
There’s No Easy Path to Asylum, But It’s Even More Difficult for Queer People
Ever Wondered How American Nudist Resorts Deal With Erections?
Do the Pics You 'Like' on Social Media Reinforce Silly Body Elitism Standards?
English