Written by Daniel Villarreal on April 17, 2015
Be first to like this.

Hey there, chronic masturbator! Were you aware that The Book of Mormon considers “sexual sins” like whacking off as second only to murder? It’s true, at least according to Scott Stevens.

There’s no other way to put this — his Kickstarter is INSANE. Let’s take a closer look:

Here’s how it works: the user will use a Log Activity button to mark each “instance of masturbatory activity… any extenuating circumstances or triggers (that led to jerking off)… and times when [users]  were tempted to indulge, but successfully withheld.”

If users find themselves in the mood to sploot, they’ll can use the “Uplifted” and “Tempted” buttons, which include boner-killing “resources meant to reduce libido and shift the mindset from sexual to spiritual” like “the gospel topics pages on (Mormon website) LDS.org,” “uplifting music by the Tabernacle Choir,” and suggestions to do exercise, but not sit-ups because “the potential friction which could be counterproductive to our cause.”

If the physical activities are still not enough, the app will recommend that the user engage in some activity that will provide an alternative physical release:

“For some users, smashing old burned-out lightbulbs can give a sense of satisfaction. For others, discharging a full can of pressurized whipped-cream onto a fully-consenting friend or hired helper can provide some relief.”

But if smashing lightbulbs and shooting whipped cream all over your friend aren’t enough to kill your urge, you can press the “Emergency” button and “a series of annoying beeps and boops… will annoy the user enough to reduce libido and temptation.” And here’s where the Kickstarter gets REALLY wacky. 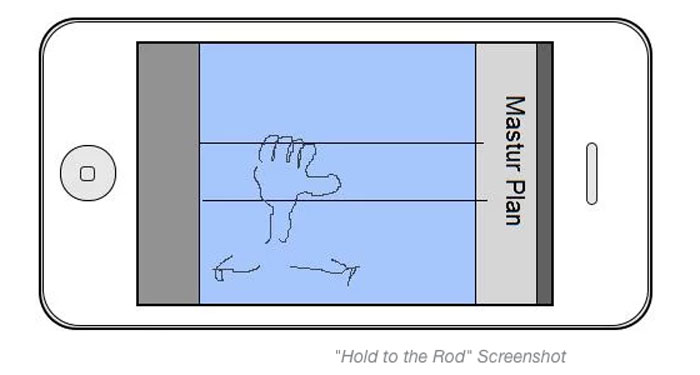 Those striving to break the habit should be wary of anyone who approaches and asks them to “go rub one out,” or who invites them to a “pole greasing party,” or a “knob polishing gala.” These events are but a few of the tools the Lubricatti use to lead us down the proverbial and possibly literal slippery slope.

Once the user is out of reach from the Lubricatti, he may progress to the next activity, which I call “Holding to the rod.”

The app will display a graphic representing the iron rod. When the user touches the rod, a hand will be displayed firmly grasping the rod. The user may slide the hand back and forth over the rod, but if his fingers break contact with the screen, the hand will let go. Maintaining a grip on the rod thus ensures that both hands remain occupied (one holding the phone, the other “holding” the rod), and therefore the users’ hands will be unable to engage in other activity. See below for screenshot:

As the user slides the virtual hand back and forth across the virtual rod, virtual friction is created. Sliding faster creates more friction. With increased friction, the rod will eventually begin to heat up and glow. The end goal is to make the rod white-hot. The user should feel free to engage in this activity with righteous vigor. When the goal is finally achieved, the rod will melt away in an explosion of fireworks, and the app will play soothing gurgling/splashing sounds to help the user relax and bask in the glow of a job well-done.

The Travelin' Bum Encourages Self-Empowerment Through Travel ... and Bare Butts
'Call Me Mother': How Drag Mothers Are Raising a New Generation of Queens
31 Big-Name Actors You May Have Forgotten Are Part of the MCU
'Am I the Assh*le?' Outrageous Queer Wedding Moments Edition
English