McDonald’s Can’t Have It Both Ways

Written by Booty The Unicorn on January 10, 2011
Be first to like this. 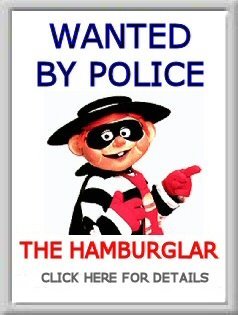 Surely you remember the swoon inducing McDonalds commercial that featured a gay son and his father about to snack down on some McNuggets. Our gay blog was all over that business.

The commercial, which aired in France, bore the tagline “Venez comme vous etes” or “Come as you are”. While LGBT groups cooed and made adorable internet-cat-faces about how wonderful it was that McDonalds was celebrating it’s gay customers, others said that type of marketing would never fly in America. Admittedly, we were even on the McDonalds-is-coming-around train.

Whoops! While Grimmace may be allowed to smooch boys in Paris, the Hamburgler is blocking gay websites in New Zealand restaurants, which recently began offering free wifi.

3.news.co.nz reports “McDonald’s says it’s just trying to ensure its restaurants remain family friendly, but in other parts of the world they’re using gay themes themselves in advertising.”

Among the sites deemed family unfriendly by the hamburger giant, a rainbow youth group, and gay dating sites. It should be noted that some gay content is available for viewing. McDonalds seems to be blocking on a site by site basis. Which is totally within their right to do. But this coupled with the gay commercials in France creates a clear case of dangling a carrot in front of the LGBT community to win their support, even as the company is insulting them by calling them family unfriendly.

What do you make of this pickle (onion, lettuce, tomato, cheese & secret sauce)?

Here Are 5 Simple Hacks for Surviving the Holidays With Your Family
6 Secrets Queer Black Men Wish Gay Society Realized
Remember That Time Luigi Was Said to Be Promoting Lesbianism in a Video Game?
31 Big-Name Actors You May Have Forgotten Are Part of the MCU
English