Meet The Science Reporter With A Bionic Arm 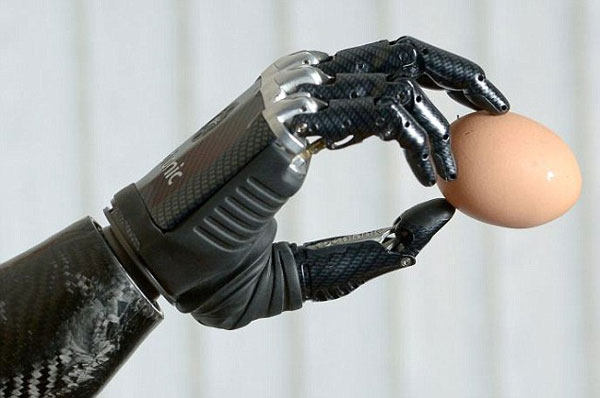 When you think of a bionic reporter — “The $6 Million Dollar Correspondent,” if you will — you might think of journalist who can type at 5,000 words a minute, or a newscaster who can blow dry their hair with bionic fans built into their forearms. But as advanced as current prosthetics are, they still have their limitations.

When a case of TV gear toppled onto the forearm of CNN anchor Miles O’Brien, he never imagined the injury would lead to the amputation of his left arm above the elbow. Nor did he imagine having to retell that story for the rest of his life. But like a true science reporter, O’Brien focused his tale on bionic prosthetics that might give future amputees the ability to grasp and manipulate objects.

There are 100,000 upper limb amputees in the U.S.. Typically such amputees get outfitted with a “split hook,” a clunky 1912 prosthetic which places the amputee’s stump in a sleeve and uses shoulder and torso straps to to help operate a hook at the end of a plastic arm. Shrugging the shoulder clenches the hook, lifting the stump releases it, enabling the amputee to use the hook as a tool.

The LMP is designed to be as functional and versatile as an arm and hand. It has 26 joints, 17 motors, and can mimic movements of the hand, wrist, and elbow. Sadly, Trekkies-with-amputations should know that the arm can’t make the Vulcan V, (the “live long and prosper” gesture). But despite this one elusive task, its range of motion is still impressive.

Electrodes attached to the stump detect the electrical impulses that the shoulder would use when activating muscles in the lower arm. These severed neural pathways cause amputees to keep feeling the muscles of their “phantom limb” — O’Brien describes his as having his arm in a sling and partially asleep all the time.

The bionic arm has to learn the wearer’s particular muscular language. As O’Brien programs his bionic arm in the video above, it sits three feet from him, held by a base and connected by wires. The movement is magical, almost like watching a spoon bender. As O’Brien thinks about making a fist or opening his hand, the bionic arm responds with the corresponding action.

For scientists at Johns Hopkins, the next challenge will be developing a prosthetic limb with a sense of touch; it’s an innovation that can’t come too soon for O’Brien.