Written by Charles Thompson-Wang on December 22, 2017
Be first to like this.

The Golden Globes kick off the award season each year with a plethora of well-dressed men in their finest red carpet looks.

After the Globes, at black-tie events from the Oscars and the Cannes Film Festival to the British Academy Film and Television Awards, guys typically don their very best formal wear.

And then there are awards ceremonies like the VMAs and Grammys, where there are no rules for red carpet looks, so celebs get to strut down the carpet in creative and fascinating fashions. 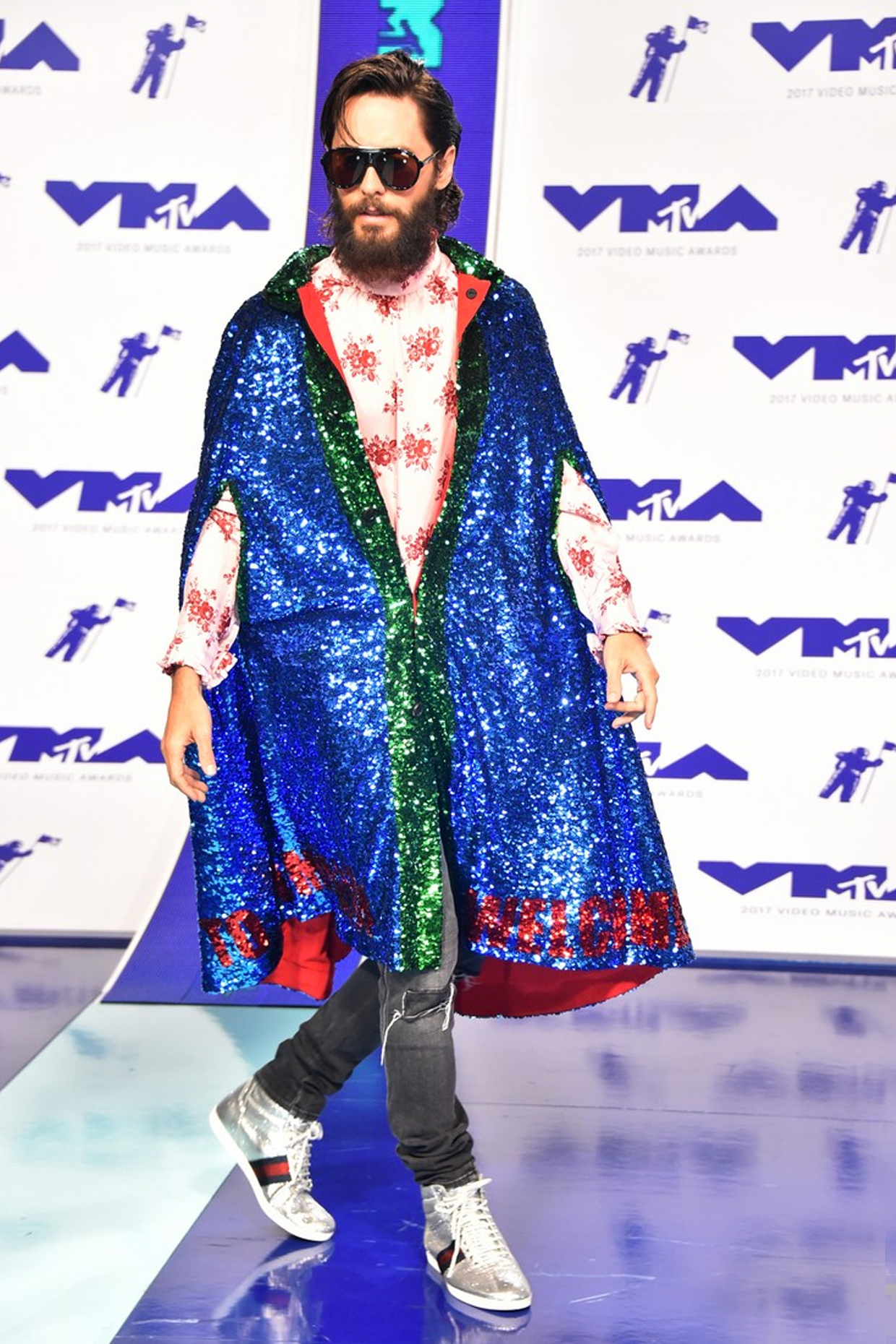 Regulars like Jared Leto and Tilda Swinton give us memorable fashion-forward red carpet looks. Since Leto’s the face of Gucci’s Guilty fragrance, he typically sports head-to-toe Gucci on the red carpet. And who other than Leto could rock a Gucci sequined cape with iridescent hi-tops?

Many A-listers can make anything look good. From the downright outlandish to modern takes on the standard suit, here are our 10 favorite men’s red carpet looks of 2017.

1. Pharrell at the Academy Awards

Just like Leto wears exclusively Gucci, Pharrell is the face of Chanel. At this year’s Oscars ceremony, Pharrell made his grand entrance wearing a classic black tuxedo updated with Chanel’s signature pearl necklace and brooch. This subtle embellishment made a traditional outfit look hip and modern.

2. CeeLo Green at the Grammy Awards 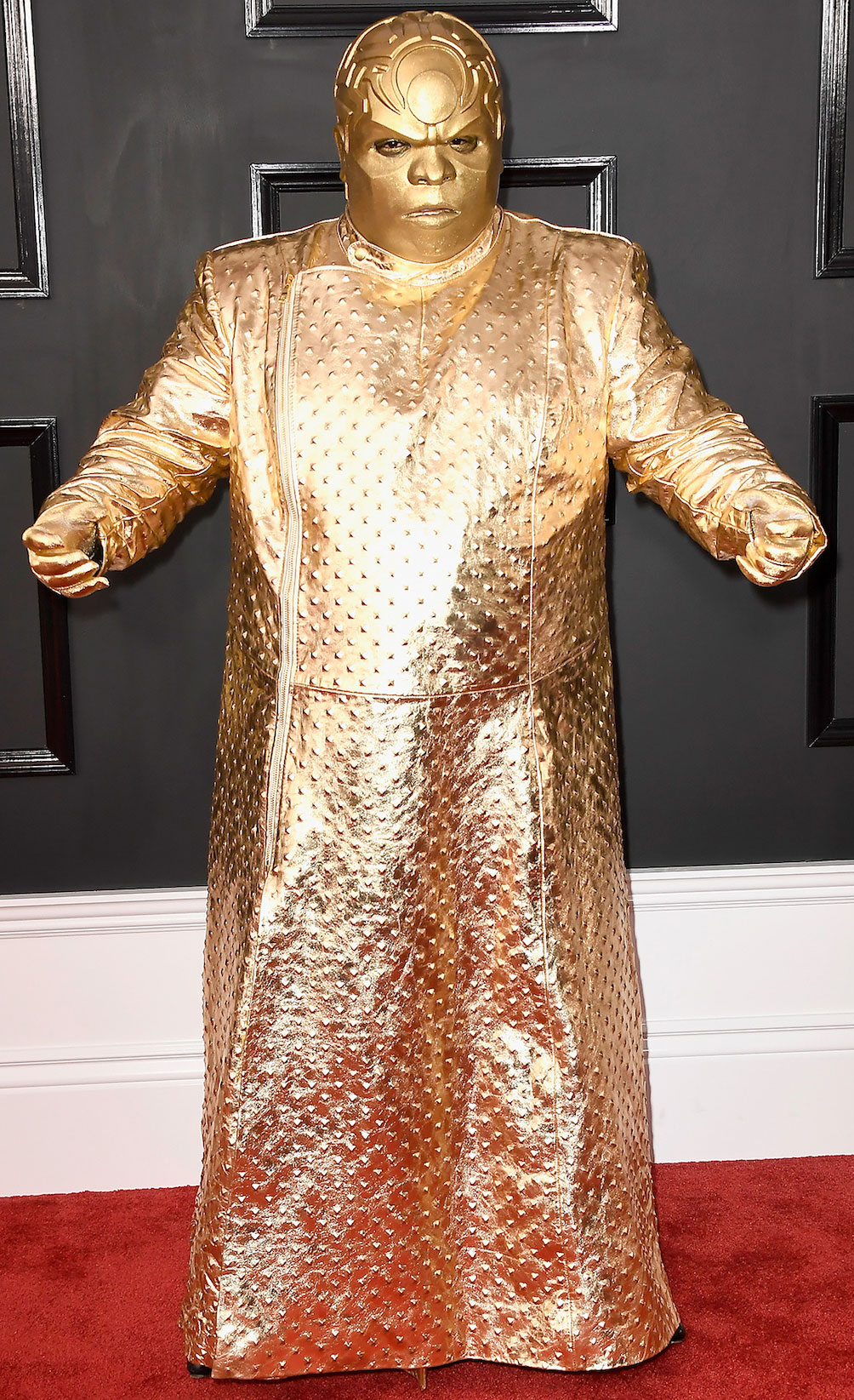 CeeLo is no stranger to wacky red carpet looks. He’s previously shown up covered in feathers, looking like a tropical bird. This year he surprised everyone as alter-ego Gnarly Davidson, a cross between C-3PO, a Ferrero Rocher chocolate and an actual Grammy. We can’t help but be impressed with CeeLo’s bravery and creativity — and like it or hate it, there’s no missing him in a crowd!

3. Mahershala Ali at the SAG Awards

Mahershala Ali won our hearts with his performance in Moonlight. Not only did he win Best Supporting Actor for the role, but he also scored major points with this classy look. At the SAG Awards, Ali stood out in a sea of black suits with this crisp, white, beautifully tailored Ermenegildo Zegna Couture silk tux.

4. Caleb McLaughlin at the Emmys

At this year’s Emmy Awards, the young cast of Stranger Things dazzled us with their charm. (They may be young, but they certainly have a sense of style.) Like Caleb McLaughlin, who dressed to the nines in a custom Garçon Couture tuxedo. He looked dapper in a bold purple floral formal jacket. His slim trousers and slipper-style loafers completed the suave ensemble.

5. Rami Malek at the SAG Awards

Like Mahershala Ali, Rami Malek is a red carpet risk-taker. That paid off at the SAG Awards, where he wowed us with this black and grey houndstooth Dior Homme suit with hand-embroidered red stitches. Malek picked out the look himself after he attended the Dior Homme runway presentation the week before the awards show. Malek has excellent taste.

6. Riz Ahmed at the Academy Awards

Riz Ahmed, no stranger to awards shows, became the first Asian and Muslim actor to win the Emmy for Outstanding Lead Actor in a Limited Series or Movie. Handsome and dapper, Ahmed’s fashion sense is as dazzling as his talent. Instead of the traditional black suit, Ahmed stood out in this nicely tailored navy blue Zegna tux.

7. Jidenna at the Grammys

While Jidenna may not be a household name — yet! — he knows how to create a statement with red carpet looks. A rapper, singer and songwriter, Jidenna is famous for his dandy “Classic Man” style. He describes the look above as “heavily inspired by the Harlem Renaissance, with hints of traditional West African design” in an interview with Fashion Bomb Daily. In a royal blue kaftan, Jidenna looked regal and sophisticated at this year’s Grammys.

8. Jaden Smith at the Met Gala

He’s only 18 years old, but Jaden Smith has been a fashion staple for houses like Louis Vuitton for years. And at this year’s Met Gala, fashion’s biggest event for red carpet looks, Smith didn’t disappoint. Draped head-to-toe in Louis Vuitton, he slayed the red carpet game with dropped-crotch pants and a knee-length coat. Smith showed he has a sense of humor when it comes to fashion — he carried his own dreads as an accessory!

9. Machine Gun Kelly at the VMAs

This handsome young rapper from Cleveland, Ohio, cleaned up nicely for this year’s VMAs. Machine Gun Kelly traded in his streetwear for a modern and dapper Thom Browne hipster suit. We’re also crazy over his black loafers with white soles — a definite standout at the VMAs.

10. Maxwell at the Met Gala

Sexy R&B crooner Maxwell pushed the envelope with this look from Dsquared2. Sporting a beautifully tailored jacket with zipper detail, Maxwell draped a skirt over his pants for a more editorial feel. The edgy outfit was appropriate for the Met’s tribute to Rei Kawakubo, the founder and designer of Comme des Garçons.

F*ck Love: We've Singled Out Some of the Best Valentine's Day Gifts ... For Yourself
Buggery, Sodomy and Cross-Dressing, Oh My: A Timeline of Gay Criminalization in America
Here’s What QPOCs Hear When You Say ‘We Can't Redesign the Pride Flag’
13 Films That Say 'Screw Romance' and Stab Love in the Eye Then Twist
English