Mitt Romney: We Have To Hang Obama By The Neck 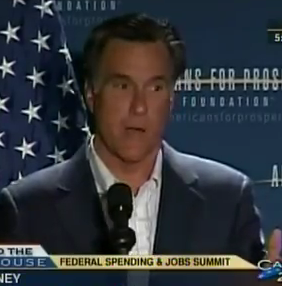 Although we’re a gay blog, we shine our rainbow spotlight on other issues we find equally deserving of your attention and/or outrage. We watched this press conference clip three times this morning and had to pick our jaws off of the desk after each time.

Mitt Romney, a Republican presidential candidate, told reporters at a press conference that we need to hang Barack Obama, the President of the United States, by his neck. I care little for the flimsy metaphor sewn into his comment. The man said we have to hang Obama by the neck.

Romney clearly planned this horrid metaphor in advance. It’s a wink to the racists, birthers and conservatives out there that don’t want to see a black man in office, but allows just enough deniability in the event of liberals (rightfully) freaking the hell out about a presidential candidate suggesting we hang his adversary, a black man.

It’s important to hold Romney accountable for this insanity. If and when he attempts to dance his way out of the very clear implications of his metaphor, it should be noted that the type of person who “accidentally” uses lynching metaphors at any time, let alone on television, has zero business serving our nation as its president. Ever.

While this behavior is unacceptable and certainly offensive to all Americans, it’s unfortunately not unexpected. We did after all, just close out a week dominated by Donald Trump’s racist jabs at the President of the United States – A black man could never get into Harvard, a black man needs to personally show me his birth certificate, etc.

Here’s hoping that it’s exactly these types of thinly-veiled and racially-charged threats against the President of our country that will be the downfall of the Republican party in the coming election. No matter how you feel about Obama, I hope you agree that Mitt Romney’s insinuation literal threat to hang the president is completely unacceptable.

Relationship Red Flags: 5 Indicators the Person You're Dating Is Horribly Codependent
The CW's 'Two Sentence Horror Stories' Is Bringing Serious Queer and POC Representation to the Genre
Understanding the Quiet Queer Activism of Mister Rogers
We Asked an Ethics Professor About Posting Pics of Hot People Online Without Their Consent
English