Modern TV Is Still Killing Off Its Lesbians, And It’s Dead Boring

Lesbian Death Syndrome, also known as Bury Your Gays, is the trope that plagues every queer fandom nerd. Trust me — it’s claimed the lives of all but two of my favorite queer TV characters.

Lesbian Death Syndrome is the tendency of Lesbian and Bisexual female characters in fiction to die, usually under tragic circumstances, often having just achieved some form of happiness. It has its roots in a period when lesbian and bisexual women could only be depicted onscreen if they died or otherwise failed to achieve a happy ending. Of course, the AIDS crisis has also contributed to a close association between queerness and death in pop culture.

Though we live in increasingly progressive times the death trope persists, like the staggering reaper that it is, through a mixture of laziness and ignorance on the parts of showrunners and writers. Though gay and bisexual male characters are far from immune, female characters, experiencing the double marginalisation of misogyny and homophobia, fall especially prone to it.

The trope has shot to forefront of my consciousness in the last couple of weeks thanks to the clusterfuck that has been Lexa’s death on CW’s The 100.

Though Lexa was only a recurring character, she was the love interest for Clarke, one of the show’s leads, and when a young female character, leader of a rebellion in a sci-fi world, kissed another girl onscreen, it created a surge of enthusiasm both for the characters and The 100 itself. At last check there are zero other bisexual or lesbian dystopic rebellion leaders in television. The show’s creators talked loudly about how important they felt it was to provide this kind of representation. The “Clexa” relationship garnered positive publicity, no doubt bumping The 100‘s viewing figures nicely in the process.

The 100 profited from having a queer female relationship appear onscreen. Its fanbase, swelling with queer women who are still largely deprived of representation in this genre, trusted that Clarke and Lexa were in safe hands.

Then Clarke and Lexa had sex. Lexa was dead by the end of the episode.

To say that The 100‘s LGBT viewers feel betrayed is an understatement. “Lexa Deserved Better” trended on twitter for around sixteen hours after the episode aired. Jason Rothenberg, the showrunner, lost 15k followers overnight. There’s evidence to suggest that fan reaction cost the show substantial viewing figures, with a drop from 1.39 million to 1.25 million for the episode that aired after Lexa’s death. 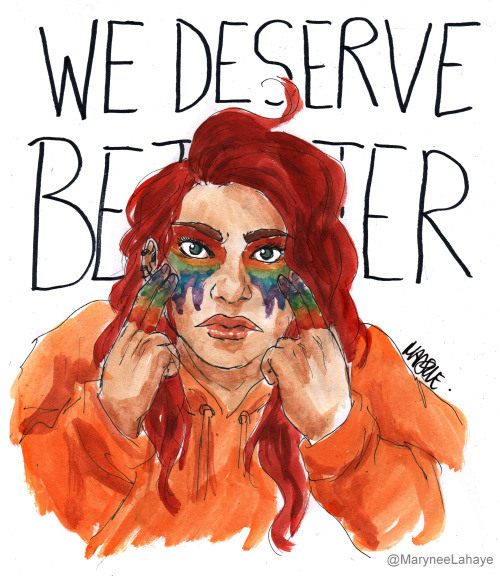 And what makes the reaction even more significant is that, far from simmering down, fannish rage seems to have generated a wave of activism. Galvanized by the realization that these people who claimed that LGBT representation mattered to them clearly had no idea what they were doing, fans have since raised $30,000 for The Trevor Project whilst organizing behind the hashtag “LGBT Fans Deserve Better”.

LGBT characters, especially queer women, are still so rare that losing one hugely impacts the percentage of us onscreen anywhere. According to GLAAD’s latest statistics, out of 884 recurring prime time television characters in 2015, just 35 — 4% — were LGBT. I would be willing to bet that the majority of those were gay men, where Lexa’s fans are largely queer women.

The thing is, it’s wearing on a community of already underrepresented fans to keep losing their favorite characters. I personally watch every episode of my preferred CW show, Legends of Tomorrow, with half an eye on how close bisexual superhero Sara Lance is to the nearest roof edge or pointed object.

My fears are not unfounded: Sara, who is the first queer superhero ever to appear in an onscreen comic book adaptation, has already been murdered once on the CW’s Arrow. She was only resurrected because Legends got a green light. And when Ali Liebert guested on Legends as a closeted lesbian who Sara falls for, the fandom posted warnings in the show’s tumblr tags about the strong possibility that Liebert’s character would die, in case other less battle worn fans got too attached. (She didn’t die. But I held my breath the entire episode).

This is the reality of being fannish whilst queer: We expect our faves to die the moment a showrunner needs a plot twist. Stuck for story ideas? Kill a character! But which one? Obviously the ones least likely to be central to the show’s ongoing arc, and since leads are still usually white straight men, the ones up for execution are inevitably women, queer characters and characters of color. Is your fave a brown lesbian? Enjoy them while they last, kid. Our representation suffers — but worse, so does our experience as fans.

To lose a lesbian character like Lexa on a show that creators had made a point of promoting as LGBT-friendly seems particularly cruel, though. The backlash isn’t just about The 100: It’s a damp ceiling crashing down from the steady drip of generations of a media culture that insists that queer deaths are more meaningful than queer lives. 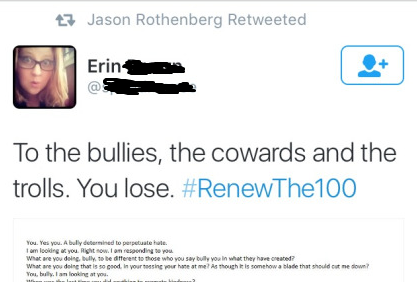 Showrunner Jason Rothenberg seems bemused, even shocked that people are angry. He has stated that that he was “a little shaken by the intensity of the negativity”, and has been retweeting comments from fans that seem to imply his critics are “bullies”.

The problem, this heterosexual white dude is discovering, is that interacting with fans belonging to a persecuted minority is nowhere near as, ahem, straight-forward as slapping a label on a character, and then disposing of her when it’s no longer convenient to keep her around.

In creating Lexa and her relationship with Clarke, The 100 was mobilizing (and let’s be real, monetizing) fans who are already more likely to be victims of violence than their straight counterparts. These fans, like all us queers, maintain an elevated consciousness of the threat of violent assault or even murder in their daily lives.

When representing such vulnerable viewers, it’s not good enough, as Rothenberg claims he was doing, to just treat “Lexa and Clarke as a normal couple” on a show where character deaths are routine. They aren’t “normal” (i.e.: the same as straight characters), they’re a crumb of hope for a starving audience. 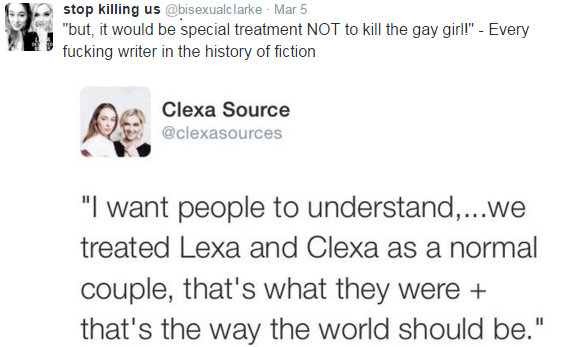 To avoid the kind of fallout he’s now experiencing, Rothenberg needed to have handled Lexa’s exit from the show with a great deal more sensitivity than to have her shot, almost immediately after she slept with her girlfriend.

In an interview with TV Insider, Rothenberg stated that: “We’re bold here. We’re trying to tell a story and we’re focusing on what we think is the best story and hopefully people will go for the ride and understand. … I don’t even want to talk about the trope that’s out there about LGBT characters; that is not something that factored into the decision.”

The misconception Rothenberg appears to be laboring under is that every other Lesbian Death Syndrome story was penned by a moustache-twirling bigot hiding in a bush with a typewriter. Rothenberg is a Nice Guy sans twirlable moustache, so his story must be different. His attitude smacks of the arrogance of the privileged, and it’d be enraging if I weren’t so exhausted by it.

Here’s the bottom line: It’s not in any way “bold” to have the only lesbian on your show die. It’s a cliché so lazy, I’m too tired by it to be angry. I just want a nap.

In fact from now on, every time a straight writer kills off a lesbian or bisexual woman, I’m going to turn up outside their house, and I’m going to lay down and sleep in their driveway. And I’m going to stay there until they come up with something entertaining enough to be worth waking up for.

You’re boring me, assholes. Do better.

Islay Bell-Webb is a BAFTA nominated screenwriter and comic book nerd from Edinburgh, now based in London, and a graduate of the National Film and Television School. She has had short stories published by Gutter Magazine, LGBT History Month Scotland and Creating Iris Magazine. She is being mentored by Russell T. Davies through the BFI Flare mentorship scheme, and is represented by Mady Niel at 42. You can find her on twitter at @littlemissisles, where she has opinions about Lego Batman and coffee.