Written by Daniel Villarreal on May 21, 2016
Be first to like this.

For two and a half years, I’ve run a monthly LGBT film series at the Texas Theatre called CinéWilde, and before each film we chat about its historical background to help enhance the viewing experience for new and old viewers alike.

This month, we showed David Lynch’s stylish 2001 film Mulholland Drive, a lesbian neo-noir with plenty of twists, turns and dangerous curves. This “Film School” viewing guide WON’T help you unravel its mystery (though this link will help). But it will give you a fresh appreciation about what happens on screen — oh, and “Film School” is spoiler free too, so enjoy!

Rita, a brunette starlet, barely escapes an attempt on her life after a car crashes into her limousine on Mulholland Drive. Struck with amnesia, she stumbles into an apartment just off of Sunset Boulevard where Betty, a cornfed blonde from the Midwest, has just arrived eager to achieve her Hollywood dreams. When they meet, they discover that Rita also has a purse full of cash and a mysterious blue key. Together, they work to discover Rita’s true identity and the secret of what happened on Mulholland Drive.

What’s the deal with David Lynch?

Most people either love or hate the American director’s use of surreal imagery and dreamlike logic. His films often incorporate “magic realism”, presenting supernatural or omnipotent characters in otherwise commonplace situations. His films often have a 1950s feel where the normalcy and naivety is undercut by a seedy underbelly of criminal violence. His female characters often have multiple, fractured identities; all of which intersect quite nicely with Mulholland Drive‘s use of film noir devices.

Film noir (French for “black film”) is a cinematic sub-genre the refers to the hard-bitten, black-and-white crime dramas of the 40s and 50s, films that arose from detective pulp novels of the same era. Though the most famous example of film noir is the excellent 1944 flick Double Indemnity, other well-known noirs include Sunset Boulevard, The Maltese Falcon, The Third Man, and more recent movies like the 1974 Jack Nicholson/Faye Dunaway film Chinatown, the 1982 sci-fi Blade Runner and the 2000 “film-in-reverse” Memento.
Most film noirs feature dark color schemes, night locations, asymmetrical shot compositions, mirror reflections and close-ups intended to heighten the sense of drama, drama which can sometimes tip over into melodrama. Their plots usually revolve around a mystery in an urban setting with a private eye and gangsters tracking down stolen money or valuables. And of course, there’s almost always a femme fatale, a seductive woman who uses her beauty to hide her deadly secrets; she often serves as a foil to a virtuous, secondary “good girl” character.
Noirs also have a decidedly bleak view of humanity, depicting passionate love affairs, seedy characters and deep obsessions with crime where even the “good guys” end up getting dirty. 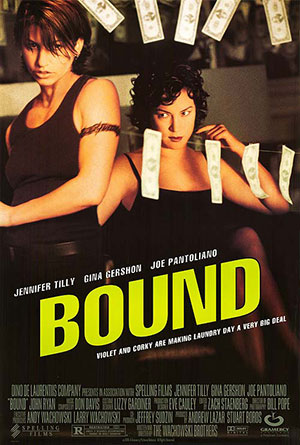 So what is “lesbian noir”? Is that even a thing?

Kinda. The Hays Production Code — a censorious set of rules that restricted U.S. films from 1930 to 1968 — prevented graphic sex, violence and openly LGBT characters from ever appearing onscreen. So whenever LGB characters appeared, they were often “coded”: Gay men would use effeminate gestures or wear a flower in their lapel, lesbians would wear tailored suits, have gruff voices and slicked back hair. LGB characters were usually villains (re: perverted degenerates) looking to corrupt innocent lovers, wreck lives or lead truth-seekers astray; hardly positive depictions.

As a result, lesbian relationships were almost entirely absent from film noir. However, if you looked closely you could still see glimmers of them in films like Young Man with a Horn, Les Diaboliques and the women-in-prison drama Caged. More recent films that have incorporated noir elements have been more overt with their lesbian characters including the murderous couple in Peter Jackson’s Heavenly Creatures (1994), the Wachowski sisters’ Bound, and the beguiling ballerinas in Darren Aronofsky’s Black Swan (2010).The lesbians in these films end up serving as anti-heroes rather than villains.

What does all this have to do with Mulholland Drive?

Mulholland Drive is a “neo-noir” (that is, a modern film noir). It uses color instead of black-and-white and plays around with different methods to keep the genre fresh and exciting. Some neo-noirs draw attention to the fact that they’re films or have a recursive quality where the same details pop up repeatedly, changing in significance each time they appear.
As such, Lynch makes no bones about poking fun at film noir and the filmmaking process: he incorporates numerous film noir references and the film’s first section is comically melodramatic with industry insiders depicted as either unbelievably cheery or insanely serious. As the film winds into its grittier second part, the Hollywood magic fades and the same characters and objects return much darker and more ambiguous. The blue key in particular threatens to unlock the truth of Rita and Betty’s relationship, a truth that is all the more heartbreaking amid the beautiful artificiality surrounding it.
David Lynch lesbians

We Asked Hornet Users to Share Their Most Outrageous Thanksgiving Story — in Exactly 10 Words
Here's a Look at Some of Our Favorite 2021 Pride Month Photos
Looking Back at 'Game of Thrones' and Its Plentiful Male Nude Scenes
Get Ready for He-Man's Latest Incarnation, Coming to Netflix (Photos)
English