Written by Daniel Villarreal on September 30, 2015
Be first to like this. 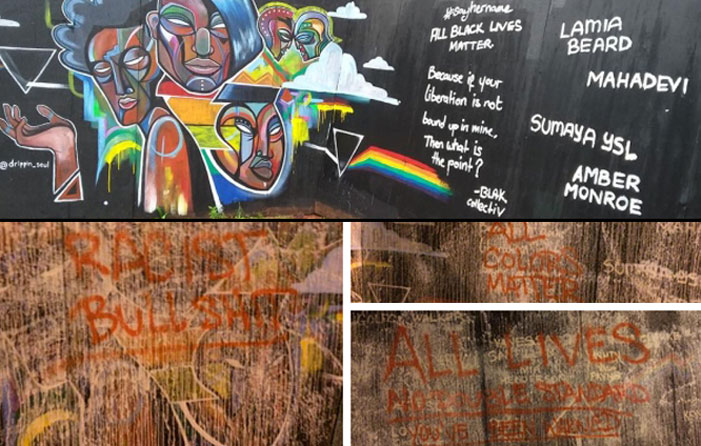 This month, a Canadian mural in Ottawa commemorating several slain transgender women of color got destroyed by threatening graffiti.

The original mural said: “Rest in Power. #sayhername ALL BLACK LIVES MATTER. Because if your liberation is not bound up in mind, Then when is the point? – Blak collectiv” and included some the following women’s names:

– Lamia Beard, a 30-year-old who died of gunshot wounds in Norfolk, Virginia in January 2015

– Mahadevi, a 22-year-old disabled trans woman who got pushed off a moving train in Bangalore, India in September 2014

Props to the mural for being so international and inclusive of women of many different kinds of color. In contrast, the vandals used two quite fugly shades of orange and to defile the artwork with the words: “Racist bullshit. All colors matter. All lives, no double standard, you’ve been warned.”

You’ve been warned? Ugh. Forget the menacing tone of violence for just a second and note that if all colors matter, then a multicultural mural honoring the lives of Indian, American, Canadian, and Somalian women shouldn’t really bother you. But the additional “warning” also shows that the vandal considers some lives worth harming. Disgusting.

Keep in mind that trans women have been killed in double-digit numbers this year alone, and its possible that the number is actually much higher than we think, and many other slain trans folks have simply been erased due to misgendering by hospitals, governmental agencies and the media.

As far as we know, authorities haven’t caught the perps yet. However, one small bright spot in this story was the mural painted in response to the vandalism, which read, “If all lives matter, then why are stories of trans women of color continually erased?”

If all lives matter, then why are the stories of trans women of colour continually erased? #Ottawa #BlackLivesMatter pic.twitter.com/zt53ABRbjj

Loic, Who Grew Up Gay in Homophobic Cameroon, Shares 'What Pride Means to Me'
7 Times TV Got HIV-Positive Characters Right (and One Series That Never Bothered)
A List of 25 People, Products and Companies American Conservatives Have Tried to 'Cancel'
Here's What Our Favorite Queer Personalities Are Saying About the Dave Chappelle / Netflix Controversy
English