Written by Daniel Villarreal on March 14, 2015
Be first to like this.

Pentecostal Navy chaplain, Lieutenant Commander Wesley Modder, has been called “intolerant” and “unable to function in the diverse and pluralistic environment” after allegedly telling soldiers that homosexuality is wrong and that “the penis was meant for the vagina and not for the anus.” Oh God.

Modder was serving at the Naval Nuclear Power Training Command facility in South Carolina on February 17th when he received a letter outlining complains against him including:

– telling a woman who had premarital sex that she was “shaming herself in the eyes of god.

– telling a student that he could “save” people from being gay.

– berating a student for getting pregnant out of wedlock. 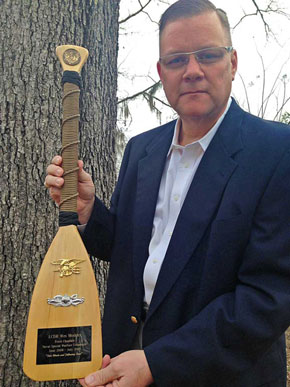 According to the Military Times: “The issue arose after multiple sailors filed equal opportunity complaints about Modder with the command, alleging discrimination.

When confronted with the complaints, Modder told his command that ‘he will not follow Navy policy if it conflicts with his faith.’

Officials decided that ‘counseling is inappropriate in this case’ and that Modder ‘must be removed from the command.’”

Modder has been temporarily reassigned as a staff chaplain at the Naval Support Activity center in Charleston while the Navy mulls over what to do with him. If he gets the boot, he could lose his retirement benefits, so naturally he’s fighting it.

But he’s fighting it with the odious The Family Research Council — a group that wants to criminalize gay sex and deny people birth control — and the Liberty Council, a legal group that ostensibly “advocates for religious expression in the military and in public institutions,” but whose spokespeople compare gay marriage to Nazism and call breast cancer a punishment for abortion.

Keep in mind that Modder isn’t denying the accusations against him. Rather, the Liberty Council (who made the charming video above) says that Modder’s dismissal violates a 2013 Congressional law absolving that chaplains from performing “any rite, ritual or ceremony that contrary to [their] conscience, moral principles or religious beliefs.”

But even though the Pentecostal church stands opposed to homosexuality, Modder still has an obligation to create a welcoming environment for soldiers of all sexual orientations and practices. If he can’t do that without condemning or insulting them, he shouldn’t be working as a spiritual advisor, in the military or anywhere other than a Pentecostal church.