Written by Kevin Farrell on January 3, 2011
Be first to like this.

Newly elected conservatives in New Hampshire have made enemies of gay blog readers by getting the ball rolling on striking down the state’s law allowing same-sex marriages to be performed in the state. Four different attempts to revoke the law are in the beginning stages. One seeks to demote same-sex marriages to civil unions, while the other three would put a halt to any form of union at all. What effect these laws could have on the 1,500 marriages already performed this year remains to be seen. 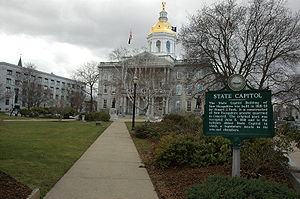 Nashua Telegraph reports Rep. Leo Pepino as saying, “I think we have the votes (to repeal). We have a lot of really good conservatives and a good conservative doesn’t believe in gay marriage. … It’s a matter of ethics.”

Marriage in New Hampshire allows gay couples to adopt and share one another’s health care plans. Those rights would be put at risk if the law were to be repealed.

It remains to be seen how the 9th District Court of Appeals’ decision regarding the unconstitutionality of California’s Proposition 8 would effect the inevitable appeal if the law allowing gays to wed were to be changed. Unfortunately, until there is a federal law allowing for same-sex couples to wed, yoyo-ing like this will continue to happen on the state level as conservatives and liberals in office ebb and flow.

Are you disappointed to see New Hampshire considering this? Hurt? Angry? Tell us how you feel.

16 Gay Trainers to Follow on Instagram for In-Home Fitness Goals
We Asked This Personal Trainer for Suggestions on How to Fall in Love With the Gym
Remembering Rock Hudson, Who Passed Away 36 Years Ago Today
This Artist's Photos Depict Gay Millennial Love Stories of the Digital Age
English