Nuclear War — the 1965 card game invented by Douglas Malewicki, creator of the first Monster Truck Robot, Robosaurus — turns 50 this year. In the game, each player represents a head of state trying to take the others out; ideally via peaceful means like propaganda, but usually by launching warheads at each other. A player loses when their entire population — anywhere from 6,000,000 to 165,000,000 people — disappears, either by emigration or death. All losing players get to fire off all their warheads at the remaining players… meaning that, as the official site says, two out of three games end with no winner.

The high probability of everyone losing doesn’t make the game feel pointless; instead, it adds a comic thrill to the game; generally, if you lose, you start rooting for all of humanity to go extinct. And, just like in real life nuclear war, much of the game is determined by chance. When a warhead is launched, no one knows quite what will happen: You have to use spinner to see the result.

It’s hard to read the footnote in the image above, but it says that if a 100 Megaton warhead “Explodes a nuclear stockpile!”, it sets off a chain reaction that blows up the entire world, and everyone loses. That might seem a little silly, but when folks were still researching and testing nuclear weaponry in the ’50s and ’60s, it wasn’t entirely uncommon to hear of accidents involving nuclear weapons, adding a whole different type of danger — that of The Bomb dropping accidentally.

By reducing national populations to faceless numbers on playing cards, Nuclear War encourages players to think of people in the same way that military analysts do… as, well, mere numbers. The rules even suggest referring to the remaining population deck as “the meat market” and asking “Got change for ten million people?” when changing out population cards — both which became catchphrases so popular among players they got sold as bumper stickers. And while you’re laughing about “the meat market” and making change, it becomes clear the real military advisors and heads of state in charge of actual nuclear arsenals probably saw you the same way.

And, as in real life, the larger war is more than just volleying warheads at each other — players also have propaganda cards that get “10 Million Enemy [citizens to] Denounce Their Form Of Government For Yours!”, and also “secrets” with events that happen at random. Some of the secrets make “Two Million of your highly moral little old ladies rebel against your country’s military policies and disgustedly drive off in their electric cars to the enemy’s country” or have it so that a “Super Germ, the result of a blunder in your enemy’s germ warfare experiments, destroys 25 million of their own people.” The game is openly cynical about politics: After all, those little old ladies defect to an enemy country that is just as lethal and manipulative, and the Super Germ —the card that destroys the most people in the game — is the result of a blunder, not a successful attempt at germ warfare.

Should we really be gaming and joking about nuclear war?

What makes Nuclear War and other Cold War media different from today’s apocalyptic media is the combination of heaviness and humor. For example, the video game Fallout, which takes place decades after a nuclear apocalypse, is known for its sense of humor — but the jokes don’t come from a pre-apocalyptic present but rather a post-apocalyptic future. Cold War humor that comes from the actual Cold War period — like Nuclear War or Stanley Kubrick’s Dr. Strangelove — feel like they’re close to something that could really happen at any moment and, in a sense, help us laugh in the face of fear.

That dark sense of humor about the end of the world is a bit less common nowadays, but makes sense considering the mid-to-late 20th century mindset where Americans felt certain that the Russians would one day destroy our country, Russians felt the same about Americans, and the rest of the world feared one of the two would do something manically stupid and kill us all… and worst of all, we wouldn’t even know about it until a couple minutes before the bombs fell. Great.

Today, we’re still afraid of the imminent apocalypse, but the most common scenario is environmental disaster due to climate change like Roland Emmerich’s film The Day After Tomorrow. Unlike nuclear war, climate change is a gradual process. It will doom us all, but it’s not going to destroy us at any second. Plus, we can individually feel like it’s possible to do something about global warming, even if it’s just recycling or installing low-flow shower heads… but if a state leader, like General Jack D. Ripper in Dr. Strangelove, gets a wild hair and decides to bomb Russia, there’s nothing anyone can do. So we have games like Nuclear War as a classic case of laughing to keep from crying… or constantly screaming in terror.

Thankfully, no bombs were dropped, the world didn’t blow up and the Cold War ended with the fall of Communism in Russia — huzzah. But we can look at Cold War-era media as both cautionary tales and examples of pitch-black gallows humor.

Would a game like Nuclear War be as popular today?

Could there be a comedic game like Nuclear War today for today’s world-ending scenarios? In terms of an environmental disaster game, it’s not likely: While the Union of Concerned Scientists (among others) point to our extreme weather patterns as results of climate change, and governments worldwide can enact policies to help fight it, there’s not a sense that one person’s behavior can set off a chain reaction to affect the entire world.

A case could be made for our fear of terrorism being fashioned into a Nuclear War-style game, but individual acts of terrorism strike on a local scale. Yes, terrorism can (and does) have worldwide repercussions, but again, there’s too many steps involved to end the entire world at the drop of a hat (or a bomb)… not to mention that if an act of terrorism destroys the entire world, there’s nobody left in which to instill terror, which kinda defeats the purpose of the act.

Also, the actual threat of nuclear war hasn’t gone away: In fact, the Bulletin of the Atomic Scientists has set the Doomsday Clock (which shows the likelihood of apocalypse) to three minutes to midnight this year — as high as it’s been since 1984 — due, in part, to improvements in nuclear weaponry and an increase in tensions with our old frenemy Russia. And that’s not even counting the nuclear tensions between India and Pakistan.

But for whatever reason, we’re less concerned about immediate armageddon when it comes to today’s pop-culture. Nevertheless, games like Nuclear War (available soon in a new anniversary edition) remind us why we shouldn’t discount the idea we might all die at once in a nuclear fireball… and while we’re waiting, we might as well laugh. 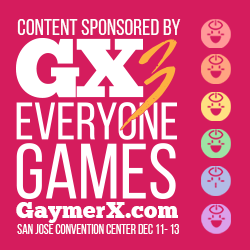 GX3: Everyone Games marks the third year of the GaymerX convention, a meeting of LGBTQ tabletop and console gamers with panels, meet-ups, parties and more! The convention takes place December 11 to 13 in San Jose, California.

This year’s Bosses of Honor include RuPaul’s Drag Race alum Trixie Mattel, Mass Effect’s Jennifer Hale, and many, many more!

Tickets are available at GaymerX.com.

Watch David Bowie Teach a Masterclass in Allyship 101
San Francisco Pride Returns With Two Epic Movie Nights in the Ballpark
17 Stories of Straight Guys' Gayest Moments Ever, Ranked by Hilarity
F*ck Love: We've Singled Out Some of the Best Valentine's Day Gifts ... For Yourself
English