Written by Terri Washington on July 11, 2015
Be first to like this.

Brett Bigham, a special education teacher, was named Oregon’s Teacher of the Year in 2014 by the Multnomah Education Service District (MESD). After winning the honor, Bigham started to speak openly about his sexual orientation in speeches about his Teacher of the Year Award. Bigham was let go earlier this year which he believes is in direct correlation with his homosexuality.

Bigham claims to have been harassed at work by multiple unnamed coworkers once word had spread about him being gay. After Bigham complained of the harassment to MESD he was fired which he believes was retaliation for his complaints. MESD claimed they let Bigham go due to his “performance, insubordinate behavior, and focus on matters other than his students.” The district also said that Bigham spent too much time going to speeches and therefore neglecting his in-class duties.

This ordeal with MESD ended with a settlement in Bigham’s favor of $140,000 dollars. An investigation by Oregon’s Bureau of Labor and Industries took place and they found that some of his claims were true and “If the case had gone forward, a determination of substantial evidence of discrimination and retaliation on the basis of [Bigham’s] sexual orientation, whistleblowing activity, and for opposing unlawful practices… would have been recommended.”

This situation could’ve been worse because it could’ve happened in another state. Oregon is one of just 19 states that have a ban on discrimination against sexual orientation or gender identity. There are still 31 states that have no such ban and lack civil rights laws. This means that over half of the Americans who identify as LGBTQ can legally be fired, evicted or not served in a hotel or restaurant because they are LGBTQ. Wisconsin, New York and New Hampshire are three additional states that ban discrimination based on sexual orientation but not gender identity. 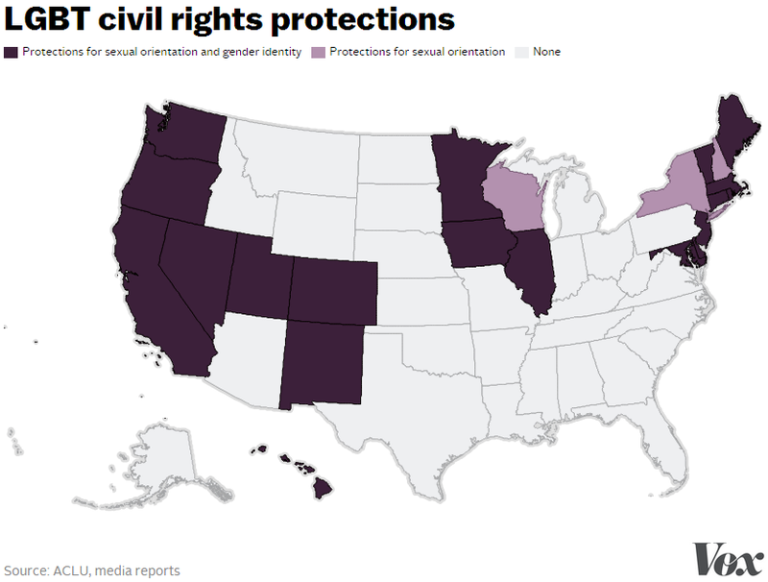 After the recent same-sex marriage legalization, one would think that civil rights laws for all people would be in place all over the country but the recent progress doesn’t mean there isn’t more to be accomplished.

The 'Rocky Horror Picture Show' Castle Is a Luxe Hotel Perfect for a Weekend Stay
5 Reasons We're Swooning Over Tyler Posey, Who's Currently Trending for All the Right (NSFW) Reasons
Under the Cover of Night: 10 of America's Most Famous Gay Cruising Spots, Past and Present
Hornet Users Tell Us About Their Best (and Worst) Valentine's Day Ever — in Exactly 10 Words
English