It’s been a rough week for people who like capitalism but hate gays and black people. First, a collection of major retailers decided to stop selling Confederate flag merchandise, prompting many fans of the stars and bars to threaten a boycott. But then, the Supreme Court ruled in favor of same-sex marriage, sending the capitalists scrambling to cash in by turning their logos rainbow-colored and writing supportive Tweets. Angry homophobes threatened to boycott those as well, which lead to amazing exchanges like this one: 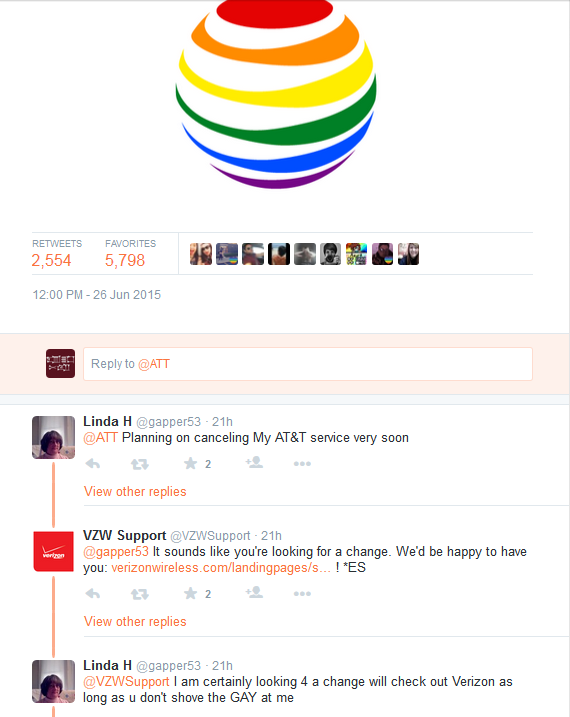 As the list of companies to boycott grows ever longer, it’s getting harder and harder for right-wing reactionaries to figure out where to spend their white, heterosexual cash. But don’t worry! Unicorn Booty is here to help with a handy guide to shopping for prejudiced hatemongers.

This is tricky. Many airline companies like American Airlines and Delta have come out in support of marriage equality.

@AmericanAir they want to ruin the sanctity of marriage, fine. Why do you insist on shoving it down our throats??!! #stayoutofpolitics

@Delta I’m done. I was proud to fly Delta. No more.

Those of you looking to travel shorter distances will be disappointed to learn that Uber has celebrated the destruction of the institution of marriage by putting little rainbow flags all over its maps.

@Uber I will remember that you are a political football-spiker when leftists start to sue churches for following their religious beliefs.

As far as grocery stores go, Walmart and Target are out for their unforgiveable decision to stop selling Confederate flags. Many snack food brands are out. Coca-Cola and Pepsi have both declared their contempt for God’s plan, but at least there’s RC Cola and Faygo to ensure that we won’t have to ingest [shudder] water.

@pepsi Thanks for showing YOUR true colors! My Christian $$ will not buy ANY Pepsi products. #LoveWins #1M1W #CCOT

@CocaCola My favorite drink for >40 yrs. Not anymore. When I’m thirsty I need a drink, not a lecture.

Boycotting General Mills also means saying goodbye to Hamburger Helper, Pillsbury, Chex (which you should have been boycotting ever since they starting using the miscegenated Peanuts gang in the ads), and the Jolly Green Giant, but the latter shouldn’t be an issue as vegetables are for homos anyway. Also, stop buying Yoplait for the wives you have in your bunker.

Starbucks is now off the menu as well, though that really shouldn’t be much of a surprise. No brand that uses that many foreign-sounding words like frappucino can be good for heterosexuality, and besides the Italians aren’t really properly white according to 19th-century phrenology anyway.

Solution: Chick-Fil-A, of course. There will always be Chick-Fil-A. Even when the rest of the country is celebrating the downfall of Western civilization, you can always count on Chick-Fil-A. There’s also that homophobic pizza joint in Indiana. As for groceries, give local farmers a try. Some of them aren’t total hippies. Yes, they do employ lots of non-Caucasians to work the fields, but they treat them really badly so it’s okay.

Tide detergent, alas, has come out in support of same-sex marriage, which means that you’ll need to pick another color-safe detergent to wash your Confederate flag.

@tide no more TIDE IN MY HOUSE

But wait! It gets worse! Tide is owned by a parent company named Procter and Gamble, which also supports the “rights” of a pair of women to spend their whole lives living together in a legally-protected union instead of making men sandwiches as the good Lord intended.

We support and respect everyone’s right to be who they are. #LoveWins #LoveHasNoLabels #PrideMonth2015 pic.twitter.com/Ti1wWmKfCd

As you can see, it’s pretty dire. You literally can’t wipe your ass without supporting the destruction of the institution of marriage — of COURSE the gays have a monopoly on butt-care products! And the smaller companies aren’t much better. Hell, even Dr. Bronner has gotten on the Big Gay Bandwagon.

But the cleanliness/hygiene issue is trickier. If you’re a the kind of proper manly-man who opposes gay marriage you’re probably not big into hygiene anyway, but at least the missus ought to clean herself and smell good, so you’ll want to get soap of some kind.

Fortunately, soap isn’t too difficult to make.  All it takes is a combination of lye and fat. Have the missus use the stuff in the bottom of the Chick-fil-A bag.

Entertainment may be difficult to find, for obvious reasons. Say goodbye to Netflix.

Alas, most pop stars have been conquered by the lavender menace. Same with most film directors and TV stars. Now that 19 and Counting has been taken off of the air, there is hardly anywhere on television for a decent Christian to see wholesome family values represented. Even the world of country music is not safe. Avoid Dolly Parton: she is very tolerant of gays and lesbians, the monster.

Solution Kirk Cameron will always be a source of wholesome entertainment. And fire up those reruns of 7th Heaven for a show with good, decent family values. And buy the Dukes of Hazzard on DVD so you can see the good old Rebel flag in action. And if you haven’t already, get into professional wrestling. Nothing gay about that. If you’d like to experiment with a new entertainment medium, why not give video games a try? They might seem ungodly, but fortunately you’ll find the gamer community just chock-full of people as homophobic, racist and misogynistic as you.

The fashion industry is not a terrific place for those of us willing to take a stand against the scourge of homosexuality. We used to be able to rely on Walmart, but that’s on the boycott list now. Levis, once stalwart defenders of hetero manhood, worn only by rigidly-straight he-men like cowboys and construction workers, just can’t wait to wrap themselves around the gays and their taut, hairy, musky bodies.

@LEVIS ~ I quit buying your products years ago because of your liberal agenda ~ thanks for affirming I made the right decision back then !!!

Old Navy is out as well, which means that you can no longer shop at the Gap or Banana Republic.

Unfortunately, you’ll have to stop venting your indignant rage at companies on Twitter. Twitter is completely behind gay marriage; the website even unveiled a little rainbow heart emoji just for the occasion. Apple has a gay CEO, so no MacBooks, no iPods, no iPads, no iPhones and no AppleWatches (haha you weren’t going to buy those anyway). In fact, smartphones are completely off the table, since Android supports gay marriage as well:

Microsoft computers are completely out as well. You’ll have to invent your own operating system.

Honestly, computers have been gay since the beginning. Thanks a lot, Alan Turing.

Alas, the telecommunications industry is hopelessly tainted by the gay agenda. All of the big corporations are infected. Capitalism itself is hopelessly polluted by the scourge of same-sex marriage. There is only one solution left.

Gayest Episode Ever: ‘Seinfeld’ Killed It With ‘Not That There’s Anything Wrong With That’
We're Dying for a Live-Action Zelda Movie, So Why Hasn't It Happened?
Another Young LGBTQ Person Has Been Kidnapped and Forced to Return to Chechnya
10 Styles From the '90s That Definitely Deserve a Comeback
English