Written by Kevin Farrell on March 7, 2011
Be first to like this. 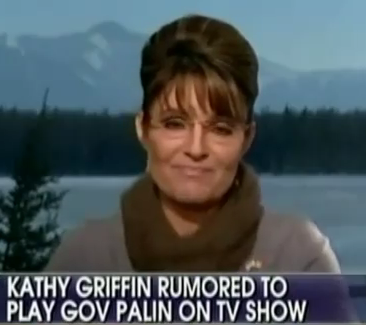 “Kathy, come up to Alaska and pick on me.” Oh shit!

Let me get this straight real quick. Palin is paid hundreds of thousands of dollars by FOX News (her employer) to appear on live television as a guest contributor. She uses this paid opportunity to call two time Emmy Award winning comedian Kathy Griffin a has-been. But we’re supposed to think it’s Kathy who is in the morally murky waters here?

You’ll notice Palin completely sidesteps the reason Griffin jokingly declared that destroying Willow Palin was her New Year’s resolution – the teenage Palin daughter called a classmate a “faggot” on Facebook last Fall. Big sis Bristol even got in on the cyber-bullying and called the young boy some nasty names herself. When the world media rightfully freaked out that the daughter of a would-be presidential candidate was calling people hateful obscenities online, Sarah Palin refused to apologize, and painted her family as the true victims in the situation.

Kathy Griffin wasn’t the one who called on her followers to “Reload,” and she wasn’t the one who put a Congresswoman in crosshairs before she was shot in the head. So don’t give us the same tired “everyone picks on Palins” shtick. We’re over it.

I would ask if you are annoyed by Palin’s incessant complaining about being bullied, but I mean…duh.

A Group of Designers Redecorated the 'Golden Girls' House for the 21st Century
Knives Out 2: Everything We Know & Everything We Want
These 3 Mainstream Comic Book Titles Are Headlined by LGBTQ Heroes
Unexpectedly Romantic: Redditor Falls in Love With His Ex-Girlfriend's Husband
English