Written by Kevin Farrell on January 28, 2011
Be first to like this. 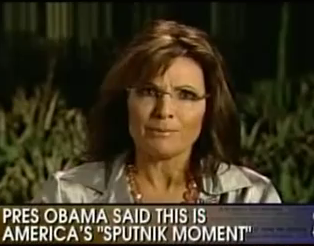 Paid Fox News Contributor, Sarah Palin appeared on Greta van Susterin’s program this week to criticize President Obama’s State of the Union address (Which we found incredibly inspiring, by the way). Palin repeatedly said “WTF” on the air, inducing a near optical injury in at least one household after my eyes rolled so far back into my skull, I feared they would never return.

WTF? As in a play on the internet meme and general text speak for “What the fuck”? Seriously? Love him or hate him, this is the President of the United States of America we are talking about here, and live on national television at that. Who says “WTF”? Uncouth, ma’am!

But the real treasure here is that Palin told van Susterin that Obama needed a history lesson regarding the 1960’s Space Race between the United States and then chief rival, Soviet Union.

“He needs to remember that, uh, what happened back then with the communist U.S.S.R. and their victory in that race to space. Yeah, they won but they also incurred so much debt at the time that it resulted in the inevitable collapse of the Soviet Union”.

It would seem that Ms. Palin, and not President Obama, is the one in need of a history lesson. “WTF”, indeed!