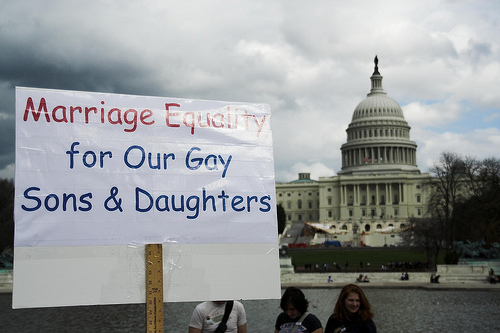 After the United States Supreme Court tossed Bishop Harry Jackson’s suit seeking to ban same-sex marriage in Washington D.C. on the basis of being completely discriminatory, Reverend Anthony Evans apparently lost his mind was quite upset.

“[W]hat the Supreme Court has set up is the greatest civil war between the church and the gay community,” Evans said. “And let me just state for the record, we don’t want that fight. We love our gay brothers and sisters. But if the Supreme Court is not going to acknowledge the fact that we have a right as religious people to have a say-so in the framework of religious ethics for our culture and society, then we reject the Supreme Court on this issue.”

SERIOUSLY? You love your gay brothers and sisters, but you are ready for civil war on them?

Candace Chellow-Hodge from Religion Dispatches Magazine says, “Using civil war imagery to set up a false dichotomy of ‘the church vs. gays’ doesn’t seem advisable in an atmosphere already rife with violent rhetoric. It also doesn’t jibe with Evans’ next sentence expressing “love” for gays and lesbians. Usually, people who want to express love for someone do everything they can to help those people live the best life possible – not prevent them from achieving full equality.” Amen, sister.

It’s worth noting that not all religious folks are threatening civil war on the gays. Reverend Rob Hardies, co-chair of DC Clergy United For Marriage Equality, added,”This is an issue that has been settled by the people’s elected representatives, and there is no turning back now.  Too many families’ and children’s lives would be disrupted if the Supreme Court were to turn back this decision and strip away rights. The Human Rights Act of DC upholds an important principle, which is that an individual’s basic human rights shouldn’t be put to a majority vote.  If the history of human rights in our country has taught us anything, it is the wisdom of this principle.”

Rev. Evans threatening war on the gay community, on behalf of the Christian Church for that matter, is exactly the type of violent rhetoric our entire nation is up in arms about and beginning to hold those who use it for political or personal gain accountable. While yes, you are guaranteed freedom of speech in this country, it comes with the necessity to use that freedom responsibly. You cannot declare war on a group of millions of fellow Americans because you have an obsession over their bedroom practices.

And really, that’s what nonsense from bigots like Rev. Evans and Bishop Harry Jackson amounts to. They are freakishly obsessed with what gays and lesbians do in the bedroom. They cover it under a veil of moral condemnation or religious reprobation, but it’s still a weird obsession with gay sex. GET OVER IT.

And take your hate elsewhere. You have no business preaching to anyone if this is the type of guidance you are espousing to your flock.