Written by Daniel Villarreal on February 14, 2015
Be first to like this.

Take the photo that snagged their top award (below): a stunningly gorgeous portrait of a gay couple in Vladimir Putin’s Russia, where sexual freedom is as limited as political freedom; where a kiss can get you a prison sentence as long as one for exposing corruption. The photographer Mads Nissen won the award by exposing viewers to the Vermeer-ish love that must remain hidden behind censorious drapes. 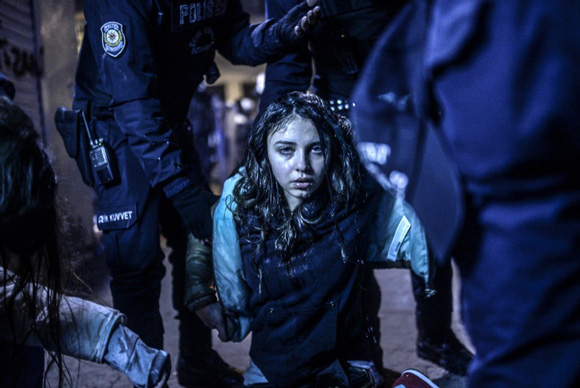 1st prize in Spot News: A young girl wounded in a skirmish between Turkish police and protestors at a a 15-year-old boy’s funeral. The boy had been killed during anti-government protest. The funeral procession lit a bonfire on its way to bury the boy; the police fired tear gas and water cannons upon the crowd. 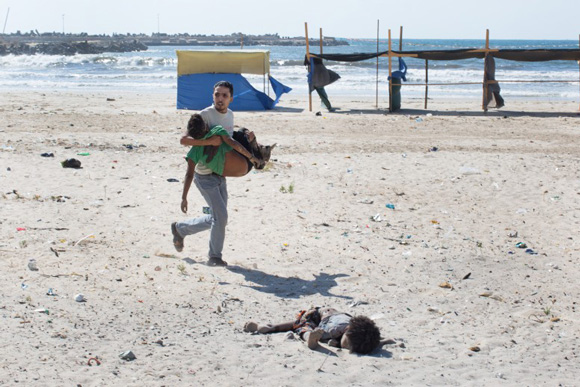 2nd prize in Spot News: A Palestinian civilian flees with an injured child as after Israeli artillery bombs a Gaza City beach. The explosions killed four boys and injured an adult. 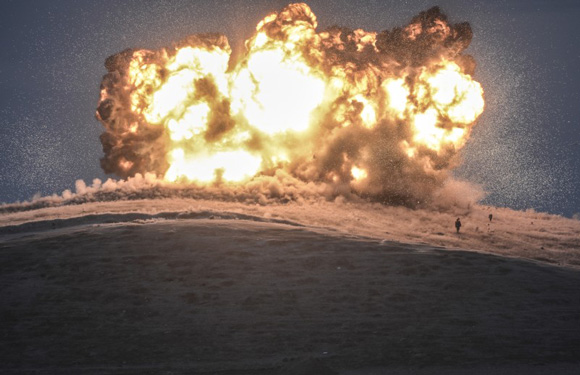 3rd prize in Spot News: ISIS militants near an airstrike at the the Turkey-Syria border. The Turkish president ordered the airstrike to destroy the extremist group. 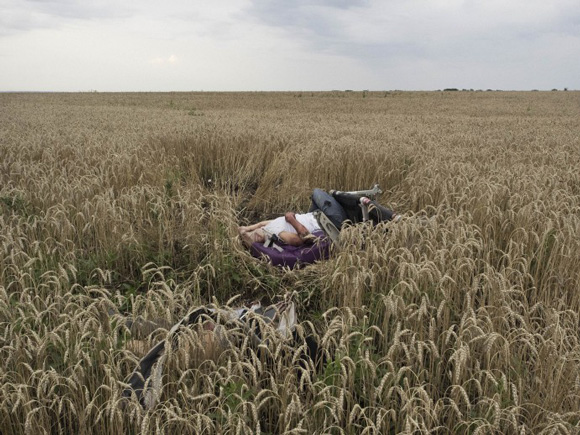 1st prize in Spot News Photo Stories: A body of a Malaysia Airlines passenger laying in an eastern Ukrainian field. A Russian-made missile shot down the flight containing 298 people on July 17, 2014. 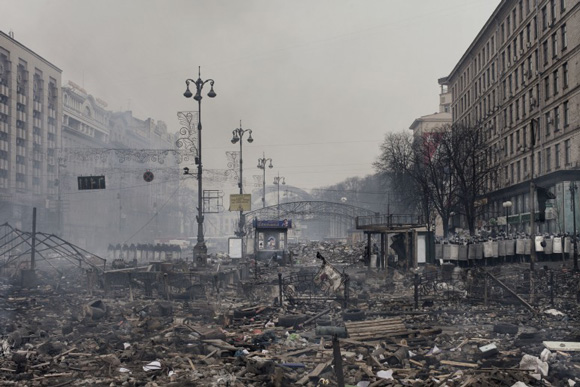 2nd prize in Spot News Photo Stories: A deserted avenue in the Kiev’s Independence Square after months of violent anti-government clashes between protestors and Ukrainian police. 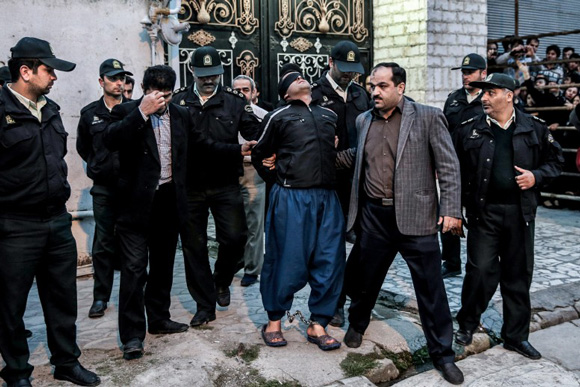 3rd prize in General News Photo Stories: A young Iranian man about to be publicly hanged for killing his best friend in a 2007 street brawl. The deceased’s mother pardoned the man at the last minute, choosing to slap his face rather than pull the chair from underneath him. 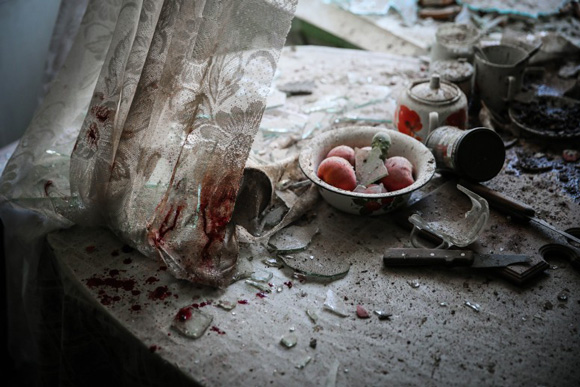 1st prize in General News: A deserted kitchen in the downtown Donetsk area of Eastern Ukraine. Many children, workers, and elderly citizens got caught in the crossfire after fighting broke out in the region in February 2014. 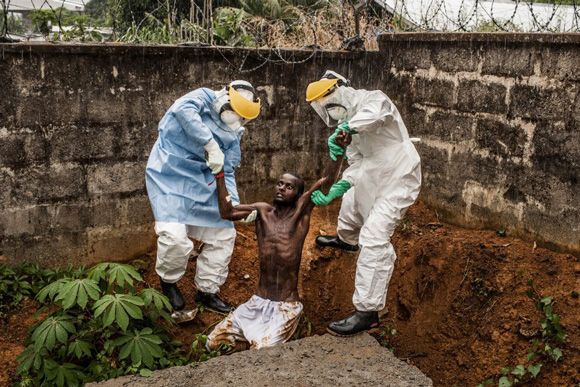 1st prize in General News Photo Stories: Medical staff at a Freetown, Sierra Leone treatment facility retrieve an Ebola patient after his attempted escape. While scaling a wall, he fell into convulsions; he later died. 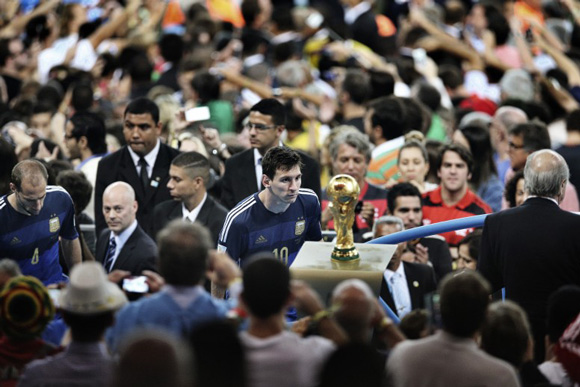 1st prize in Sports: An Argentinian soccer player faces the World Cup trophy shortly after losing the championship to Germany. 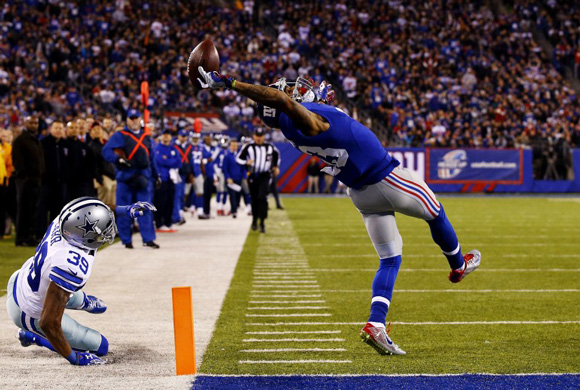 2nd prize in Sports: New Your Giants player makes a one-handed touchdown catch in a game against the Dallas Cowboys. 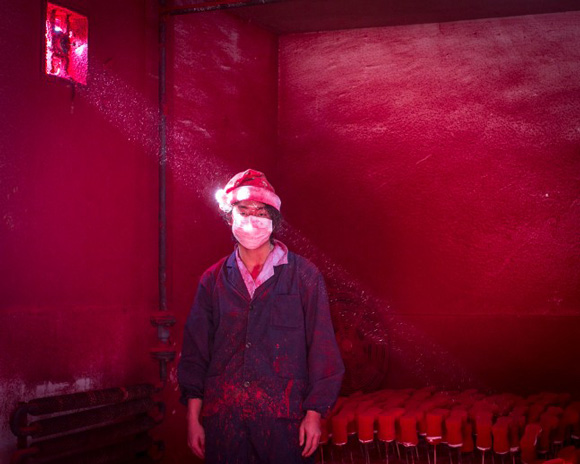 2nd prize in Contemporary Issues: A 19-year-old Chinese worker wears a Santa hat and a mask to protect him from the red dye used in the Christmas ornament factory where he works. 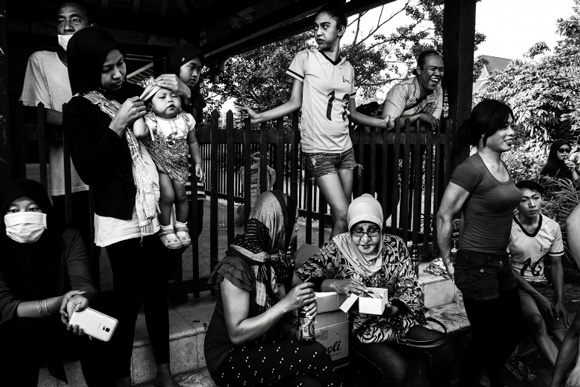 3rd prize in Contemporary Issues: LGBT activist Shinta Ratri meets with other transgender Indonesian women at the one-of-a-kind Islamic transgender boarding school that she runs out of her home. 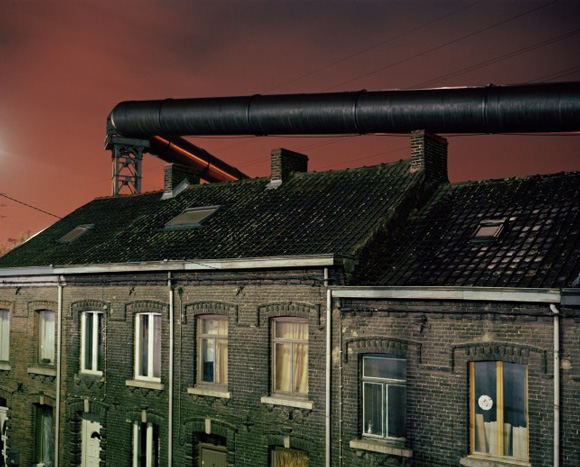 1st prize in Contemporary Issues Photo Series: A now defunct gas supply tube runs along the rooftops of homes near a steel factory in Charleroi, Belgium. 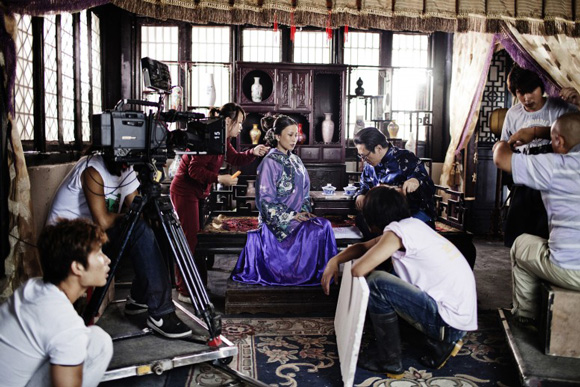 2nd prize in Contemporary Issues Photo Stories: An actress prepares for her scene in a TV series shot in China’s massive Hengdian World Studios. The country is reportedly the fastest-growing film market on the planet. 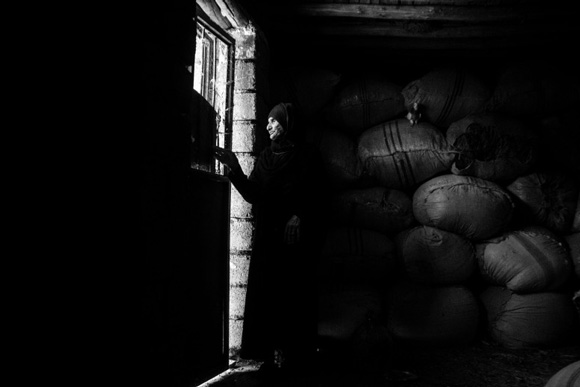 Honorable mention in Contemporary Issues Photo Stories: 72-year-old Anbar Jaberi looks out the door and waits for her son, an Iranian soldier who has been missing since the 1988 conclusion of Iran’s war with Iraq. 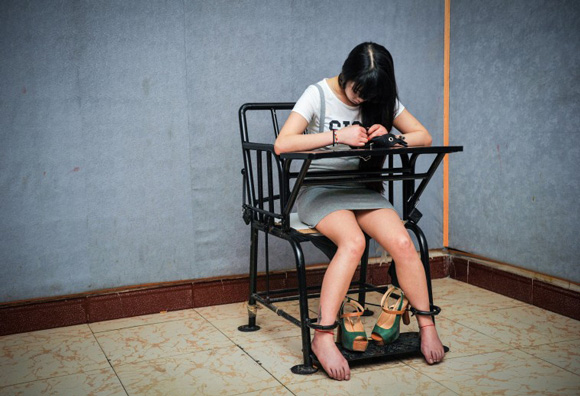 2nd prize in Portraits: A woman accused of sex work sits bound to a chair in a Chinese police station. 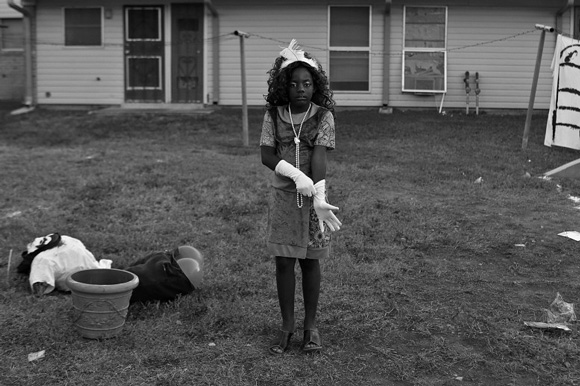 3rd prize in Portraits: An 8-year-old girl in a San Antonio, Texas housing complex awaits the start of the neighborhood Halloween party. 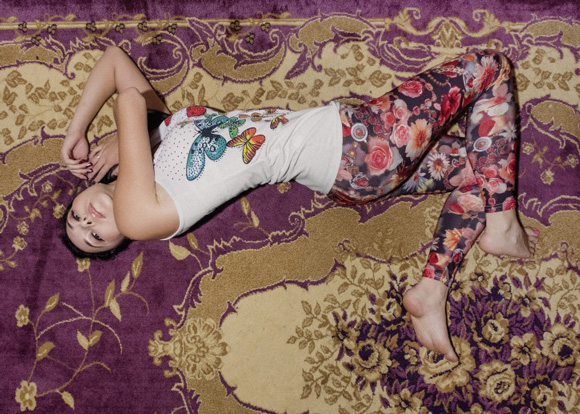 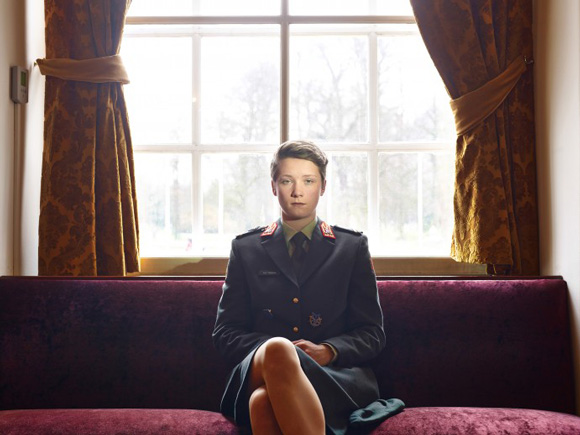 3rd prize in Portrait Photo Series: A cadet from a military academy in the Netherlands. 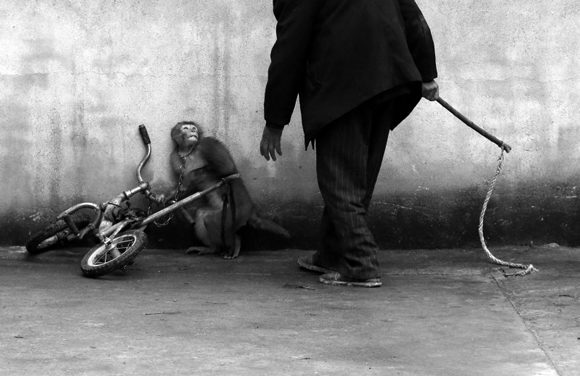 1st prize in Nature: A monkey in a Chinese circus cowers as its trainer approaches, whip in hand. 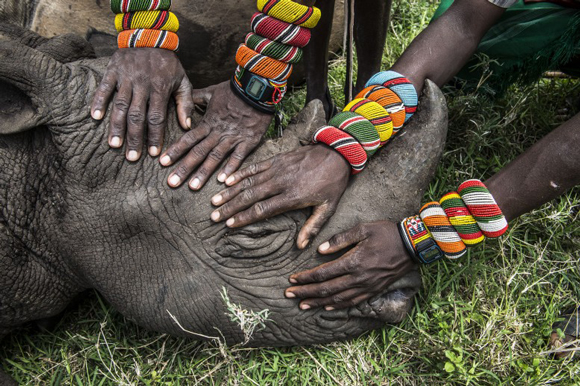 2nd prize in Nature: Samburu warriors from Kenya lay their hands upon an orphaned Rhino. Criminal poaching networks have made the sight of such animals a rare occurrence on the Kenyan plains. 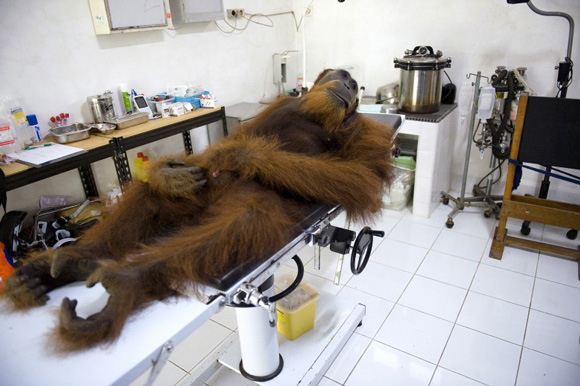 3rd prize in Nature: On the verge of extinction due to poaching and mass deforestation in North Sumatra, Indonesia, a male orangutan waits for a doctor to remove metallic gun pellets from his body. 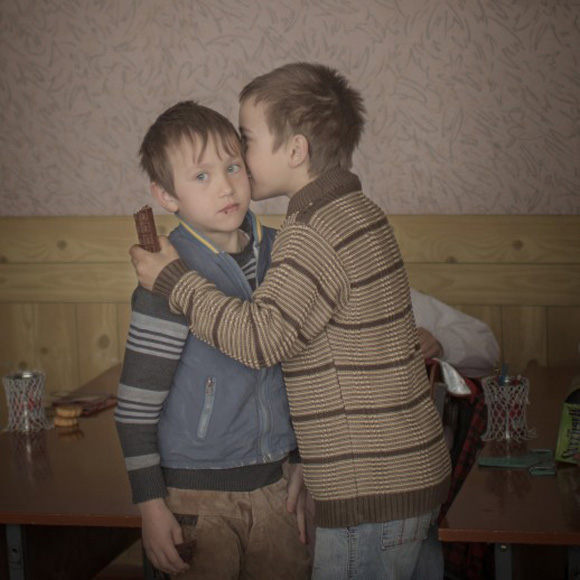 2nd prize in Daily Life: Two orphan brothers share a secret before handing out chocolate to their classmates on their ninth birthday. They are two of many orphans abandoned in the east European country of Moldova. 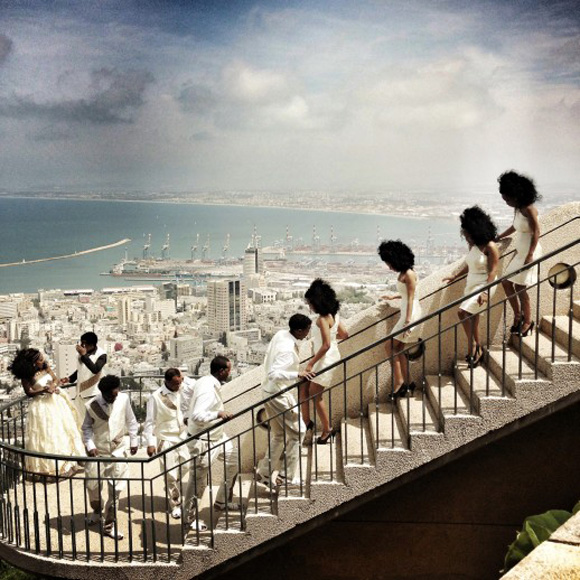 3rd prize in Daily Life: A wedding of two African refugees who came to Israel from Eritrea. A 2013 Israeli law requires such refugees to undergo at least one year of detainment after arrival before their indefinite placement in an “open detention center.” 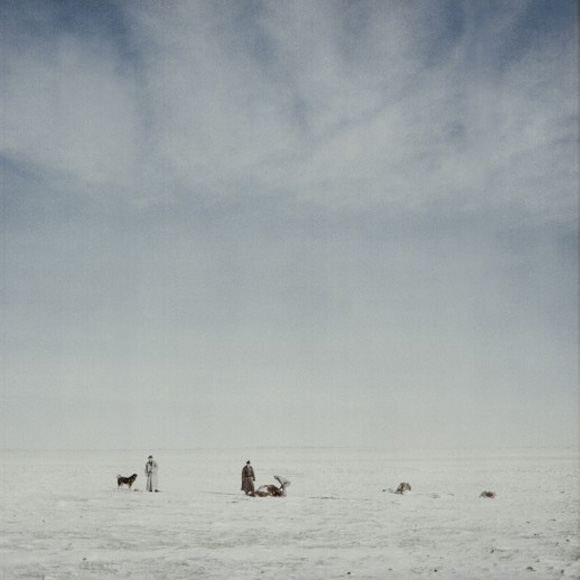 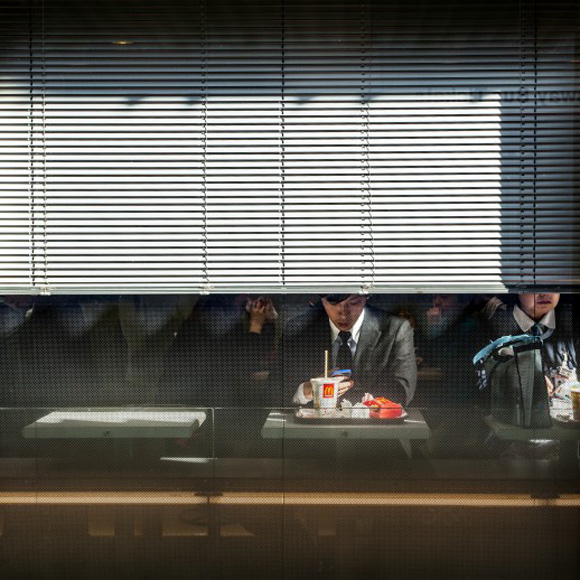 3rd prize in Daily Life Photo Series: Surrounded by others, a Japanese salaryman in Nagoya eats his McDonald’s meal alone. 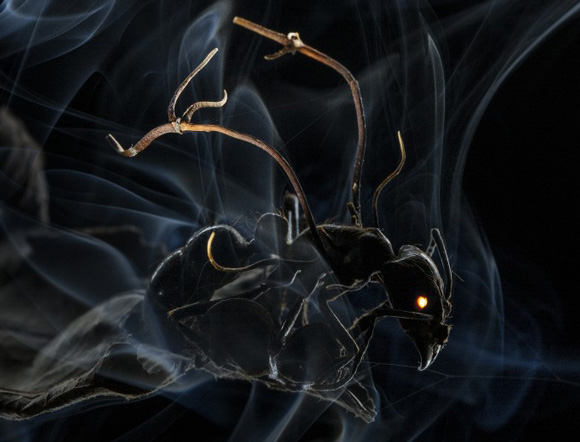 1st prize in Nature Photo Stories: Fungus spores erupt from an ant’s exoskeleton. The spores will fall to the ground and infect other ants in a perpetual cycle of death and renewal. 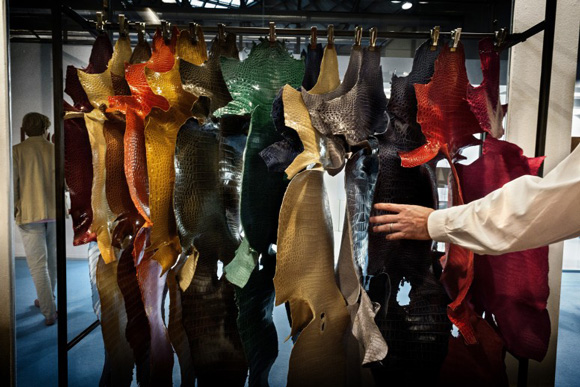 3rd prize in Nature Photo Stories: The skins of Caiman — an alligator-like reptile — hang in a display at a leather trade fair in Milan, Italy. Breeders in Colombia raise the caiman in farms and sell their flesh and hides internationally. 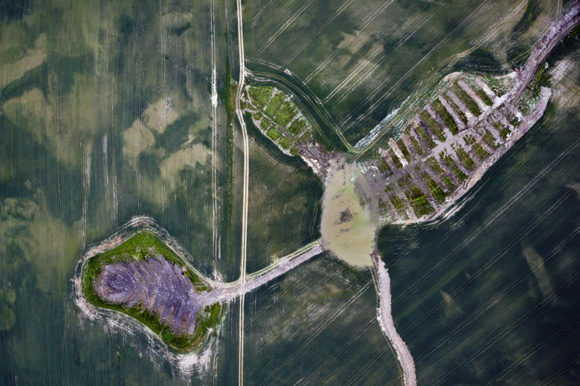