Today people’s lives are far from private. True, we voluntarily share volumes of personal factoids and photos of ourselves on social media all the time, but it feels quite different to be casually going about our daily lives being watched on camera without our consent.

Even last week, the British police used facial recognition technology to scan 90,000 concert-goers to detect “known offenders” at the Download Music Festival. Not to mention the fact that nearly every person has a camera on them at all times with built-in software and apps that can visually determine someone’s identity.

Not to worry, with the help of artist Adam Harvey and the other artists and designers delving into the anti-surveillance movement, you can continue to go to your favorite bar, festival, or protest without fear that your every move is being tracked.

What started for Harvey several years ago as a graduate student project at NYU, has become a series of strategies and products designed to put privacy back in the hands of the individual.

Harvey first developed hairstyling and make up techniques called CV Dazzle that intentionally confuse facial recognition programs like OpenCV, which analyze the spatial relationships between the parts of the face — eyes, nose, cheekbones, and mouth. CV Dazzle disrupts the continuity of a face by hiding or changing key elements that the software latches onto to identify a person. 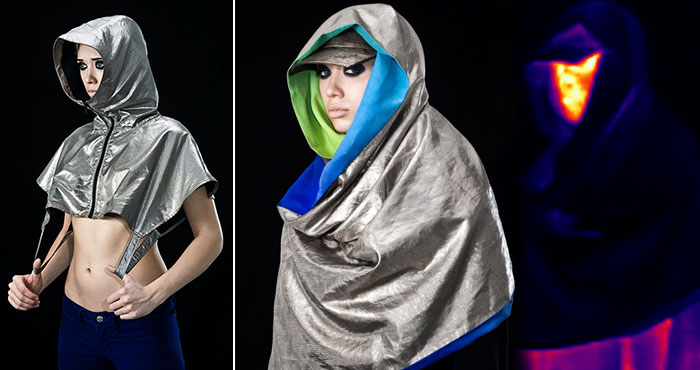 For those who don’t want their co-workers to silently wonder if they are in a David Bowie cover band, Harvey has also collaborated with fashion designer Joanna Bloomfield to develop a line of scarves, hoodies, and other clothing called Stealth Wear that uses a type of metalized fabric to shield the wearer against thermal imaging cameras and drones.

In Tim Maly’s interview of Harvey for Wired magazine, he explains his motivation for working with others to develop such unusual clothing, “Privacy and surveillance are defining who we, how we dress, and how we act with each other. I’m very interested in seeing how this will play out in terms of how we treat other’s data and how we balance security with privacy. As the security industry grows, we’re forced to define and redefine what privacy means.”

Harvey’s work has spurred on others to play with anti-surveillance methods. Model and photographer Lauren Thurman-King creates images of herself in fashion-forward CV Dazzle looks. Company AVG has begun developing “invisibility glasses” that use infrared LED lights or reflective materials to prevent software from identifying you.

One of the cleverest responses to facial recognition technology has been by graphic designer Simone C. Niquille. Her T-shirts, called Realface Glamouflage (video above), sport distorted images of famous people that act as decoys so that Facebook focuses on the images of Barack Obama and not you.

Want to try out one of these anti-surveillance looks for yourself next time you go out? Check out Harvey’s make up tips here.