Written by Daniel Villarreal on February 17, 2015
Be first to like this.

A religious extremist in Denmark opened fire this last Saturday at a public seminar entitled “Art, Blasphemy and Freedom of Expression.” The gunman — feeling free to express his displeasure — killed two people and was later killed by police. The attack came on the heels of a German toy company Playmobil achieving one of its biggest successes selling a figurine of the most famous religious extremist of all time — Martin Luther.

Though modern folks revere Luther as a progressive-minded founder of Lutheranism, a moral leader who publicly dissed the Catholic Church for its clerical abuses, in his own day the guy was a literal outlaw. The Pope excommunicated him as a heretic (an edict which stands to this day), and the Catholic church wanted him dead so badly that they made it a crime to feed or house the guy. Luther went into hiding, and during that time some of the people inspired by his criticisms began violently revolting across the German countryside with other peasants and radicals. Lots of people died. Seriously.

Small wonder that a German toy company should revere the infamous extremist with his own figurine and that the public should respond so favorably by snapping up all 34,000 available figurines in the first 72 hours. The “little Luther” plastic toy comes with its own heretical quill, blasphemous German-language bible, and grin of delight over single-handedly destroying the Catholic church. Almost makes you wonder if Playmobil will follow up on the figure’s success by making toys of other religious extremists and controversial folks like Muhammad ibn Abd al-Wahhab — the founder of ultra-violent Wahhabi Islamic sect — or Hitler.

That might sound far-fetched, but don’t forget that Luther was also a rabid anti-Semite. He penned a book entitled On the Jews and Their Lies which basically advocated for the destruction of Jewish homes and synagogues, the theft of Jewish money, and denial of Jewish civil rights. Sound familiar? Oh Germany… 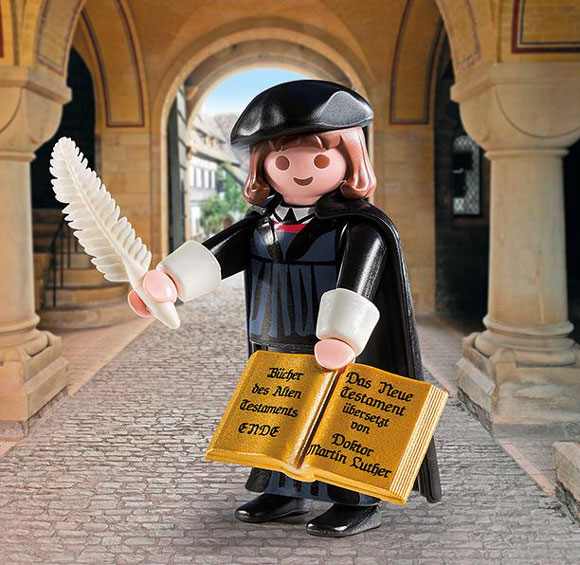 Buggery, Sodomy and Cross-Dressing, Oh My: A Timeline of Gay Criminalization in America
From the Science of Sex to Nazi Destroyers, 11 of the Coolest Queer People in Science
Let's Examine the Phenomenon of Cruising Bathrooms Through 4 Famous Queer Men
We're Loving the Push to Revive the Hanky Code for a New Queer Population
English