Written by Matt Craven on September 4, 2015
Be first to like this.

I’m a little late to this party, but I recently found that Final Fantasy VI (or Final Fantasy III, as it was known in 1994, back when I played it on the Super Nintendo) is available to download in the App Store. This is very exciting news as I spent countless hours playing and replaying this game as a nerdy teenager.

There are many amazing qualities to Final Fantasy VI, but one of the best was the characters. Sure, Mario, Link, and Donkey Kong were the iconic Nintendo characters, but Final Fantasy VI came with a cast of fourteen playable characters that helped create one of the most extensive, intense, and emotionally-rewarding journeys of any game ever. 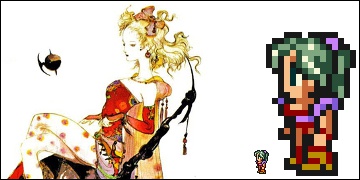 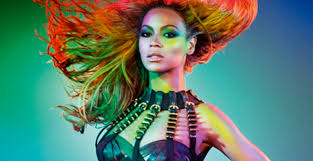 While the green hair might make you think of Katy Perry, the story of Terra’s journey of self-acceptance is Beyonce’s career in a nutshell. Brainwashed in the beginning, Terra was used as a weapon of the Empire; exactly like Beyonce’s time in Destiny’s Child under her father’s watchful eye. But once the solo career beckoned, Beyonce aligned herself with the right collaborators and eventually found her true calling. If that’s not enough in common, Terra is at her most intimidating when she turns into an Esper; it’s time to watch out when Beyonce transforms into her “Sasha Fierce” alter-ego.

While the other characters might be better fighters, it’s Terra/Beyonce who runs the world (of Balance and of Ruin). 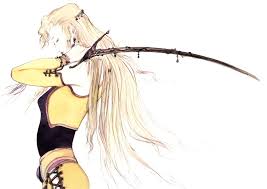 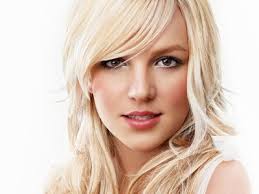 Celes is a blonde-haired warrior who started off fighting for the enemy before switching over to the good side… and that would be Britney Spears. Like Celes, Spears was seen as “the enemy” when she became the figurehead for the teen-pop revival at the turn of the millennium. However, after an infamous public meltdown in 2007-8, Spears gradually switched over to become a beloved pop icon. 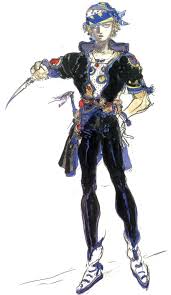 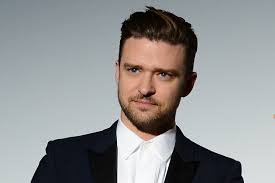 Locke is the lovable treasure hunter with a heart of gold, burdened by the ghost of a former lover; Justin Timberlake fits this bill. Timberlake is a funny, charismatic man. He might “steal” from urban music, but he’s so damn charming that you don’t care. Furthering the connection, Locke’s doomed lover, Rachel, would obviously be Britney Spears. Just like Locke, Timberlake was able to exorcise those demons (Locke, in the Phoenix Cave; Timberlake, with 2002′s “Cry Me a River” video), to become one of the most noted male pop stars of his generation. 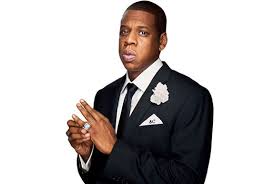 Edgar is the king with a castle, just like Jay-Z is a king with his Roc-a-Fella empire. Hustling at an early age (Edgar’s rigged coin toss to decide his and Sabin’s fate; Jay-Z’s dalliances with selling crack cocaine while growing up in New York City), both became quick successors to an impressive and respected realm (Figaro, for Edgar; rap music, for Jay-Z).

Furthermore, Edgar’s ridiculous attempt at fooling everyone into thinking he was someone named Gerad was the equivalent of Jay-Z’s hilarious boast, in 2003, that he was retiring. Edgar has an eclectic range of tools with which to dispatch an enemy; Jay-Z’s impressive rap abilities do the same trick to anyone foolish enough to start a beef with him. 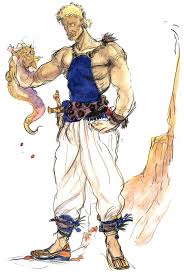 This one is a bit of a stretch, but Sabin is Adam Levine from Maroon 5. Both Sabin and Levine are characterized by their physical appearance: Sabin’s muscles make him an intimidating physical fighter, while Levine’s tattoos and chiseled body have made him America’s musical answer to David Beckham. Additionally, Sabin’s blitzes are like Maroon 5 songs: they don’t always work, but when they do, they are lethal blows/pop missiles that destroy everything in sight. 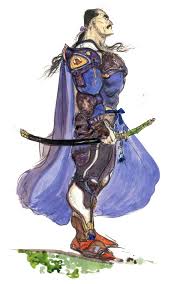 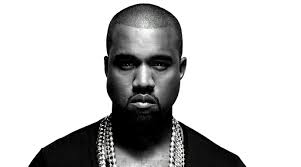 Cyan is a respected but also vaguely annoying knight with a tragic loss in his family. Hello, Kanye West! From the beginning, West has been critically acclaimed, but his general non-music-related douche-baggery has branded him as a polarizing figure. In fact, many people cannot get past West’s more annoying tendencies to listen to his music (similar to how Cyan’s throwback to old-school English can be off-putting to more casual gamers).

Also, waiting for Cyan’s Sword Tech skills in battle can be infuriating, but the patient gamer will be rewarded as his later Sword Techs result in some of the most devastating blows in the game; this is just like the casual listener being rewarded for being patient with West’s challenging music. Finally, Cyan’s wife and son were tragically poisoned by Kefka; West’s mother passed away while receiving routine plastic surgery. 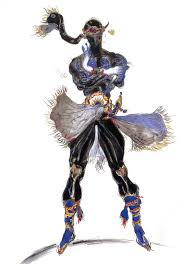 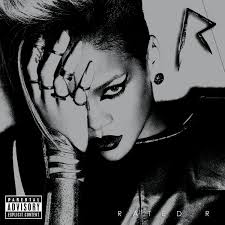 Shadow is a mysterious ninja character who often comes and goes at his own whim. This is Rihanna. Despite Rihanna’s ubiquity in the pop charts, we do not know a whole lot about her personality. Her erratic album release schedule (until 2012, she’d generally release an album a year, but it’s now gone three years and counting without a new one) is similar to Shadow’s come-and-go attitude in Final Fantasy VI. 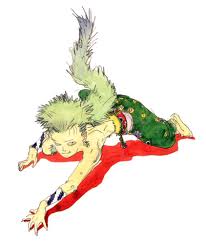 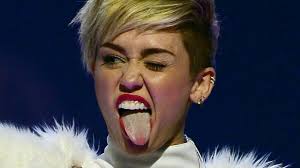 Gau is a young, feral child, raised out on the Veldt, who learns by mimicking enemies’ skills. A friend of mine pointed out that this has to be Miley Cyrus. Cyrus is a young star, trying to grow up in the wild pop wilderness, and she’s largely doing it on her own terms now. Cyrus’ wild and raunchy persona have worked for her, and her constant tongue-sticking-out is Gau, personified.

Cyrus has managed to cleverly reinvent herself, using various elements from previous pop and rap stars to succeed, just like Gau does when he “leaps” to learn enemies’ attacks. He/she might be hard to control, but underestimate Gau/Cyrus at your peril. 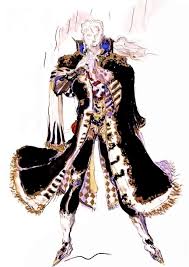 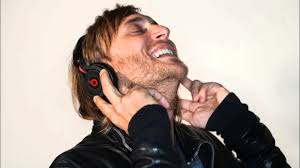 Setzer is a long-haired, free-spirited gambling man who owns an airship. This is David Guetta. Although he has been around for years, Guetta came to prominence this decade, and his musical stamp is on everything. In a bizarre coincidence, the music in the World of Ruin changes once Setzer rejoins your party, just like the musical landscape changed when Guetta’s production work on the Black Eyed Peas’ “I Gotta Feeling” made him the hottest thing in pop music. Finally, while Setzer is rarely a useful character in battle, his airship is indispensable; the same goes for Guetta (who would not be a functional singer by himself) and his EDM beats. 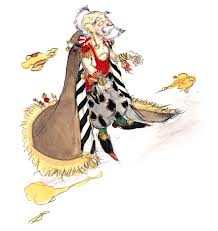 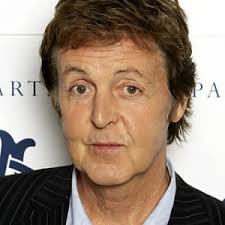 Strago might initially be seen as a relic from a time when magic ruled the world, but he’s still powerful and relevant in the present. Paul McCartney works here, as he ruled the world with the Beatles, and has continued to stay a prominent figure in popular music: His guest turn on recent Rihanna and Kanye West single, “FourFiveSeconds,” gave him a U.S. top 5 song at the age of 71. And while Strago might not be a strong physical fighter/McCartney might not be as prolific as he used to, both still deliver something truly magical when need be. 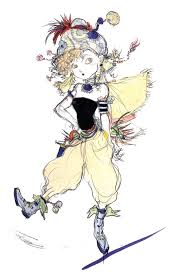 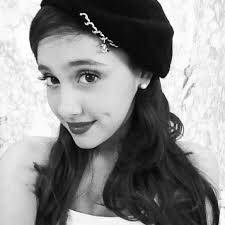 The role of a young ingenue fits both Relm and Ariana Grande. Relm is a talented painter; Grande, a talented singer. Both are just starting to make their mark in the world after somewhat slow starts (Relm was initially held back from helping to find the Espers, but ultimately saves the day against Ultros; Grande had only modest success with her first album before knocking out four top 10 songs in a row from her second album). Plus they both look adorable in berets! 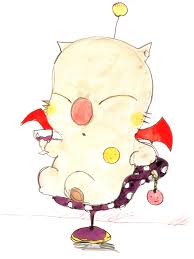 Mog is the cute, vaguely alien creature who just loves to dance. And so is Taylor Swift. Swift, like Mog, can dance to any style of music, as her various boogies at award shows have proven. Additionally, both Mog and Swift are deceptively adorable, but both pack punches: Mog’s magic abilities are among the strongest in the game, and his dances have the ability to change a battle; Swift, meanwhile, has slowly become one of the most powerful players in the music business, and her stance on things such as Spotify and Apple’s streaming service, have the ability to change the musical landscape. Plus, Mog is noted for his network of Moogle friends who assist in various parts of the game; Swift is also noted for her network of famous friends on social media and in music video (like the “Bad Blood” video).

Might also be: Jennifer Lopez; Michael or Janet Jackson 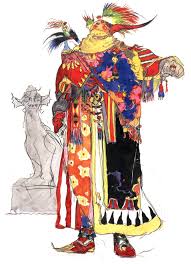 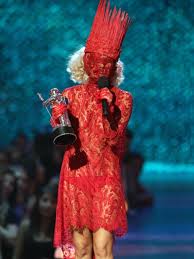 By far and away, the most obvious similarity between a Final Fantasy VI character and a pop star would be Gogo and Lady Gaga. The similarities are eerie: Both wear eccentric clothing. Both use mimicry in their repertoire (Gogo’s abilities come from mimicking other players; Lady Gaga was accused of stealing Madonna’s look, persona, and even her sound). And both have had their gender questioned: it is not known whether Gogo is a man or a woman, and Lady Gaga faced “hilarious” hermaphrodite rumors back in 2009. Finally, just like Lady Gaga, Gogo is a polarizing figure: some people enjoy using this character, while other shy completely away. 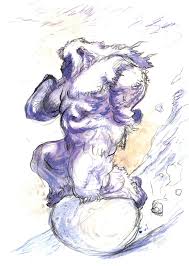 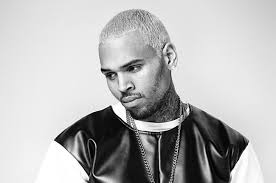 A primitive, rage-induced character that you can’t control? Well, that would be Chris Brown. While his services are occasionally commendable (Umaro packs quite a punch in battles, and Chris Brown’s “Deuces” was a pretty good post-Rihanna-beatdown jam), you could go the entire game without ever using this character.

From 1860s Drag Balls to Bricks at Stonewall: Unpacking the History of the Term 'Coming Out'
This Holiday Season, There’s a $2,600 Butt Plug With Your Loved One's Name On It
New Villagers Album 'Fever Dreams' Continues a Legacy of Deconstructing Genre Norms
28 Years Ago, Rage Against the Machine Fought Censorship by Baring Their Penises Onstage
English