Walmart and other major retailers have announced that they will no longer sell merchandise bearing the Confederate flag. In response, fans of the Stars ‘n Bars are throwing a hissy fit all over the internet and it is magical.

Professional troll Sean Hannity suggested that the retailer ban music he considers offensive (all of which by sheer coincidence was rap made by black people).

I have a question: can you still buy a Jay-Z CD at Walmart? Does the music department at Sears have any Ludacris albums? Can I download 50 Cent on Amazon?

Remember the time Jay-Z waged a war against the United States of America that left 620,000 people dead? Or that time Snoop Dog tried to secede from the union because the federal government wouldn’t let him own people? Sean Hannity remembers!

Many small, amateur bigots took to social media to rage against Walmart’s decision. Many called for a boycott, like this guy:

Wal-Mart Announces They Are Removing ALL Confederate Flag Merchandise! Time to boycott! Spread this all over! http://t.co/dnZCQJIh2W

Well, okay, if you want to get technical, the flag itself probably never killed anyone (though the people who carried it killed a lot.) But, by that logic, I’m pretty sure Che Guevara t-shirts didn’t kill anyone either. And “Che Gueverra [sic]” has never killed anybody because he does not exist.

Here’s a man who has never had a conversation with a black person ever:

Blacks were not upset by the #ConfederateFlag, which is why @Walmart never received any complaints. Only Leftist revolutionaries were. #gop

#Walmart bans the sale of anything with a Confederate Flag on it, are they going to ban CDs with lyrics about killing Police?? #HateisHate

Answer: yes. Yes they will. Walmart has an official policy of selling only “clean” versions of albums.  This policy has been in practice for 20 years. In fact, Walmart once refused to sell a Jill Sobule album because it had a picture of Prozac on it.

Though Twitter got a lot of Sore Loser Angst (seriously people you lost over 100 years ago get over it), it was Walmart’s Facebook page where our collective racist aunts and uncles really unleashed their ire. Names have been blocked to protect the ignorant. 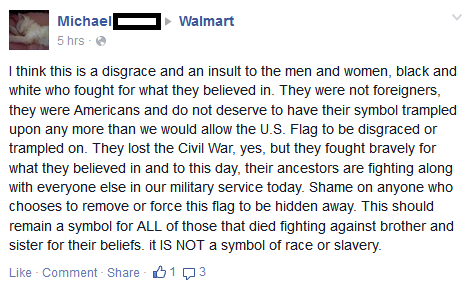 Remember all of those black people who fought for the Confederacy? Michael does! I’m sure there were lots of them. But hey, anyone who fights for what they believe in deserves to be honored, even if what they believe in was that humans have a right to enslave, beat and rape other humans based on their ethnic ancestry. 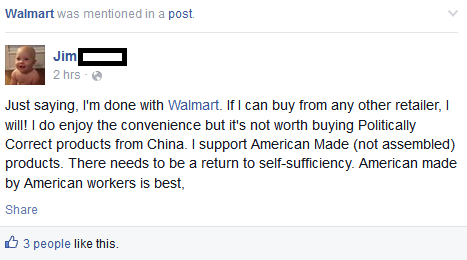 Jim here decided to get angry at Walmart’s policy of using foreign manufacturing. He wants to support America! And he will support America by raising the banner waved by a group of people who declared war against it. 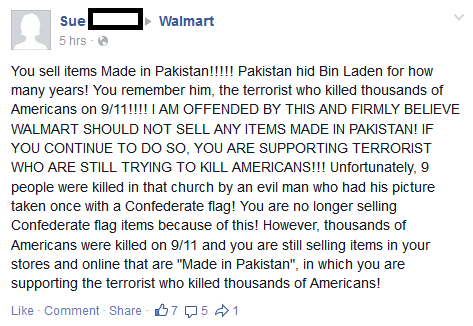 Overwhelmed by rage, Sue’s motherboard fizzled out. She displayed the Fox News viewer’s equivalent to the Blue Screen of Death: weird irrelevant blather about 9/11.

Jeff proved that the Confederate flag has absolutely nothing to do with racism by asking that Walmart prevent black people from grooming themselves.

Kimi was slightly more subtle with her racism, demanding that Walmart ban “thugs” that “wear their pants down”. But hey maybe she’s not racist! Maybe she just wants to make sure that Walmart only allows in well-dressed, sophisticated clientele so as not to tarnish the retailer’s hip, upscale image. 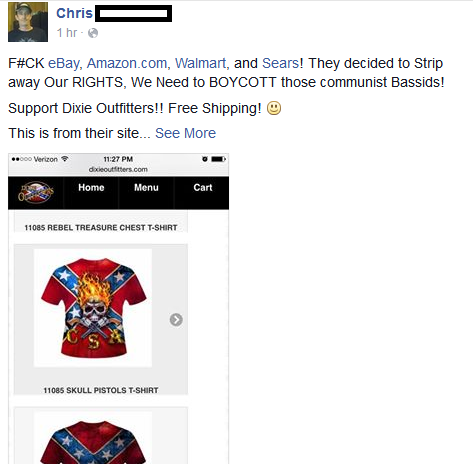 Chris has decided to boycott eBay, Amazon, Walmart and Sears, since all of the retailers have decided to stop carrying Confederate merchandise. Instead, he will only shop at Dixie Outfitters. Ever. He will buy all of his goods from there. He will eat their T-shirts for sustenance. 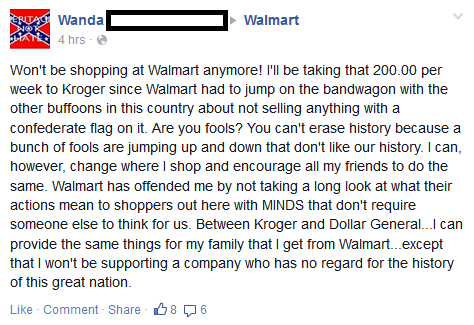 Wanda will start shopping at Kroger, since Walmart refuses to sell Confederate flags. Bad news for you, Wanda:

But maybe Wanda’s quest to boycott Walmart will open her eyes. Maybe as these angry Confederates struggle to find other places to shop, they will realize the effect that big box retailers like Walmart have on American consumers. They might start to see how difficult it is to find alternatives in rural communities, and start to ask why. They might wonder where all the little locally-owned businesses have gone, and start to see just how serious Walmart’s stranglehold over small town economies has become.