It’s unlikely that you were watching TV and tuned to San Francisco’s KQED on September 11, 1961. But if you were, and you remember a documentary TV special called The Rejected, then you were witness to television history — the first time homosexuality was discussed openly, as a social issue, over the airwaves.

For decades, The Rejected was considered a lost document. In fact, until now, CBS’s The Homosexuals — which aired in 1967, hosted by 60 Minutes’ Mike Wallace — was considered to be the first presentation of queer issues to a television audience. But San Francisco Bay Area Television Archive recovered The Rejected tapes – which you can watch in their entirety with occasional glitches in picture quality – and, at first glance, they appear to be a seriously depressing time capsule.

The rest of the LGBT community remains invisible here. The program has no time to consider anyone else but gay men, who were considered a distortion of masculinity and a threat to heterosexual male power. Gay men are referred to as “a problem,” “unpleasant,” “revolting” and “pitiful.” The then-common understandings of gay men as sexual recruiters, as well as threats to security, families, children, schools and the public health, are all on display. They get diagnosed as psych cases of “arrested development,” never maturing into true manhood. 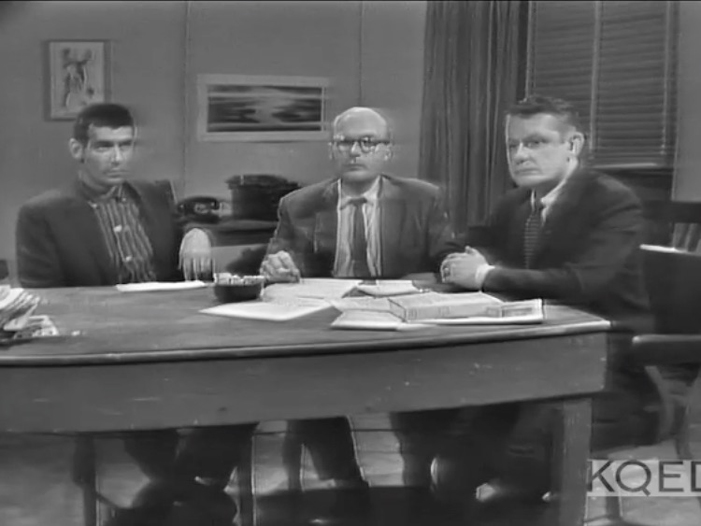 But if you can make it through the entire moribund hour – featuring a lot of dull talking, with stiff white person after stiff white person, seated behind a desk, speaking directly and awkwardly into the camera – you’ll notice unusual, even radical, glimpses of reason.

Well-known 20th century anthropologist Margaret Mead opens the show by announcing that homosexuality exists in nearly every human culture on the planet, that people are generally bisexual, and that its moral value is “entirely a matter of culture,” before concluding that “it is within the power of each society to change its attitude.” (She also conflates transvestism with homosexuality, but you take your hope where you find it.)

As the hour progresses, one of the show’s many lawyers refers to sodomy laws as “irrational,” and there’s an almost-lively debate between two others on the subject of what to do about gay men in society. Shockingly, one of them is as pro-homosexual as an establishment square could be in 1961.

Finally, there come the men from the pioneering gay rights group, The Mattachine Society. Their words are conciliatory, almost abject in their willingness to tell the dominant culture what it wanted to hear: that we were unhappy about our lot in life: unsatisfied, lonely, and seeking acceptance. They go so far as to say that they do not accept what they refer to as “The Swish,” or, “The Queen,” and that most homosexuals feel as they do. They merely want to be “spared derision.”

But if you can put aside the sad spectacle of watching gay men sell each other out in a time when that was probably considered a fine option for self-preservation, you’ll notice the Mattachine men doing something shocking: they show their faces. All three of them are front and center before the camera, just like the anti-gay clergy, just like Margaret Mead, just like real people.

Their presentation — dominated as it is by an unsettling amount of begging up from the bottom — also features an unusual number of what feel like knowing glances as they engage one another in conversation. It’s simultaneously timid and brave, these three gay men talking amongst themselves, for anyone to watch, projected into living rooms by TV’s intimacy and protected by its distance.

10 Film Actors Who Had the Balls to Go Full-Frontal On-Screen
'Butt' Is Back, Baby
Forget New Year’s Resolutions and Try These 3 Life Coach-Tested Approaches Instead
Farewell Ellen! Here Are 5 LGBTQ Celebrities We'd Love to See Take Over Daytime TV
English