Who Decided that October Was LGBT History Month Anyway? 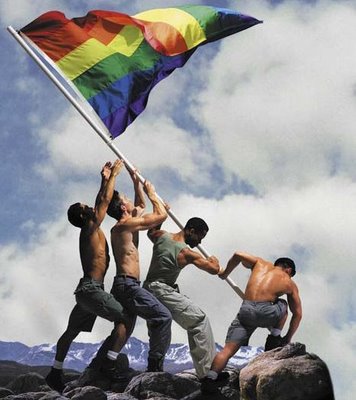 ! For over two decades, October’s been the month for reflecting on where we’ve been, how far we’ve come, and what might lie ahead.

First, a little background, with some history of the history: The annual observance started back in 1994 in an unlikely place: the decidedly queer-hostile state of Missouri. A high school teacher named Rodney Wilson came up with idea and gathered some organizers — including Kevin Jennings, who was the founder of the Gay, Lesbian and Straight Education Network, and who would go on to oversee safe schools in the Obama administration.

Why October? Well, not because of Halloween, also known as Gay Christmas, although that’s a nice coincidence. It’s because October 11 had been recognized as Coming Out Day for nearly a decade by that point, after being originated by AIDS activists in the 1980s. October 11 was close to one of the queer marches on Washington in the 80s, and it was also the month of the first march in 1979.

At first known only for “Gay and Lesbian” history, organizers eventually added “Bisexual” and eventually “LGBT.” The community continues to grapple with such terminology — are we LGBT, or queer, or what? Every label seems to leave someone out, although a quick glance through the history of terms reveals even worse options: We were once known as “introverts,” and before that “Uranians,” after the goddess Urania who was created from the testicles of Uranus. (It’s layered.)

These days, LGBT History month is overseen by a group called Equality Forum. Their website features an extensive collection of LGBT icons — an excellent resource for learning about those who came before. This year, they’ve inducted numerous new luminaries into their collection of prominent figures: there’s Virginia Apuzzo, a former nun who led the fight for AIDS care during the 80s and 90s; Charles Blow, a New York Times reporter who wrote candidly about his bisexuality; President James Buchanan, who is believed by some historians to have had a partnership with Vice President William Rufus King; and Malcolm Forbes, whose life was a cautionary tale about the punishing power of the closet even in the face of financial success.

When it comes to celebrating the month, Equality Forum has no shortage of suggestions. In an educational context, posters and lectures are a great way to reach out to people who might not know anything about queer history.

And in general, it’s a great time to reach out to allies, write an article, or hold an event, whether you’re a student or teacher or many years out of school.

But celebrating Gay History month starts with simply learning about our queer past, and for that purpose there’s no better resource than plain old Wikipedia. Begin with the LGBT History article, and then wander through articles as your interest takes you. And as you do, reflect on how lucky we are to live at a time when queer history is just a click away, after hundreds of years of it being so terrifying none dared speak about it in public.