Written by Booty The Unicorn on January 11, 2011
Be first to like this. 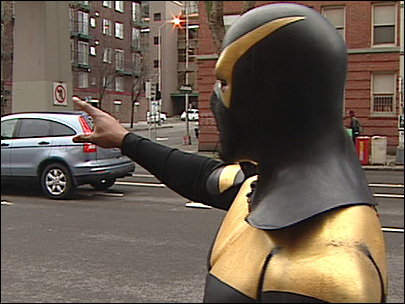 The Real Life Superhero Movement has been big news on our gay blog and in Seattle over the past 6 months. Phoenix Jones (Pbthhhh!) and his Justice League of Seattle, Avengers West Coast, associates have been patrolling the city to clean up crime. Or at least they say they are. They mostly just walk around high-fiving people, in my experience. Seattle police have a different opinion.

“They insert themselves into a potentially volatile situation and then they end up being victimized as well,” Police Detective Mark Jamieson said. Which is exactly what happened here. Phoenix Jones got served while attempting to stop a street fight. After putting a man in a headlock, Phoenix was kicked in the face, breaking his nose. Then the superhero was held at gunpoint until the two men he was trying to subdue got away.

What do you think of these so-called Real Life Superheroes?

Men Who Love Men But Who Don’t Want to Be Called ‘Gay’ Are Now Opting for This Label Instead
In the Late 1980s, Nintendo Revealed That Super Mario Has an Uncircumcised Penis
7 Things to Consider About Monogamy and Finding a Healthy Relationship Style
Under the Cover of Night: 10 of America's Most Famous Gay Cruising Spots, Past and Present
English