Reddit Flips Out (But For A Legitimate Reason This Time)

If you visit one of Reddit’s major communities right now, you might see an image like this: 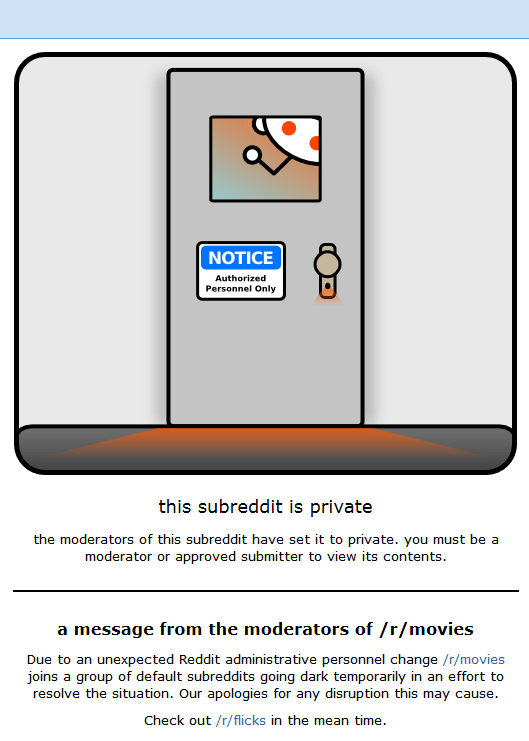 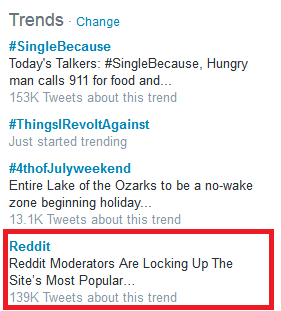 Yes, Reddit is revolting once again (though in a way, isn’t it always?). Many of the website’s moderators are shutting down popular communities in order to stage a protest about “administrative personnel change.”

The aforementioned personnel change refers to the firing of administrator Victoria Taylor. Taylor, the site’s Director of Talent, was a huge part of the subreddit r/IAmA (aka “Ask Me Anything” a group that allowed users to carry out question-and-answer sessions with some extraordinary, famous people including Barack Obama), and was generally well-loved by all the website’s users. A post discussing Taylor’s termination states:

The admins didn’t realize how much we rely on Victoria. Part of it is proof, of course: we know it’s legitimate when she’s sitting right there next to the person [doing the AmA] and can make them provide proof. We’ve had situations where agents or others have tried to do an AMA as their client, and Victoria shut that shit down immediately. We can’t do that anymore.

Part of it is also that Victoria is an essential lifeline of communication. When something goes wrong in an AMA, we can call and get it fixed immediately…

Part of it is also organization. The vast majority of scheduling requests go through her and she ensures that we have all of the standard information that we need ahead of time (date, time, proof, description, etc.) and makes it easier for the teams that set up AMAs on both ends.

So Taylor was good at her job, loved and respected by the site’s users, and helped coordinate events that brought the site tons of traffic and even mainstream press. It’s quite understandable that Redditors are shocked and angered to see her go.

Ellen Pao, Reddit’s new CEO, has not offered a reasonable explanation of Taylor’s termination. In a recently-posted comment, Pao wrote:

The bigger problem is that we haven’t helped our moderators with better support after many years of promising to do so. We do value moderators; they allow reddit to function and they allow each subreddit to be unique and to appeal to different communities. This year, we have started building better tools for moderators and for admins to help keep subreddits and reddit awesome, but our infrastructure is monolithic, and it is going to take some time. We hired someone to product manage it, and we moved an engineer to help work on it. We hired 5 more people for our community team in total to work with both the community and moderators. We are also making changes to reddit.com, adding new features like better search and building mobile web, but our testing plan needs improvement. As a result, we are breaking some of the ways moderators moderate. We are going to figure this out and fix it.

Pao’s statement really doesn’t explain what Taylor did wrong, or why she was fired. Which means that the source of Reddit’s ire is… actually reasonable. Redditors are outraged over something that is, genuinely wrong.

Of course, Reddit being Reddit, many of these rather reasonable objections are being swallowed up by the miasma of ugliness and bigotry that permeates the website:

@neontaster And her visible status as a minority. Grandstanding diversity hire at the cost of much more competent candidates.

Gamergaters have gotten involved, which is never good for a protest’s respectability:

Ellen Pao fires Victoria~joins list of SJWs who have driven more women from tech than #GamerGate https://t.co/ROVzgcmNpy via @reddit

Many critics of the website are watching the meltdown while chanting “Burn, baby! Burn!”

Reddit should have shut itself up a long time ago. Please, continue protesting.

Reddit’s like Vegas. It’s a place where people can do whatever they want, and makes u realize that’s a terrible idea https://t.co/9OfXJHO0M3

Many are calling for Ellen Pao to be removed as CEO:

So what will happen to Reddit? Will all of this blow over in a few days, or will it be changed forever? Will it survive at all? If it shuts down, where will its users go?

At the moment, there isn’t much of an alternative that offers a similar product. Other communities are more heavily moderated, or require a registration fee. There are other discussion communities with Reddit’s laissez-faire attitude toward moderation, but they generally lack the legitimacy that Reddit has. Reddit refers to itself as “the front page of the internet”, while an “anything goes”-type website like 4chan is proud to be a total cesspool. One can understand why Louis CK or Barack Obama might choose to interact with Reddit users, but neither of those men would go anywhere near 4chan.

Could another Reddit spring up to take the place of the old one? Reddit is wildly popular, but it has a slight problem converting all those page hits into cash. It doesn’t charge users anything, it doesn’t really have much advertising, and its Reddit Gold option is little more than a tip jar. Reddit attracts investors, but it doesn’t actually generate much in the way of wealth, and maintaining a site as big as Reddit costs money even its moderators are generally unpaid.

Making a website like Reddit more attractive to advertisers requires cleaning up some of its unsavory aspects; doing so whipped up a massive tornado of nerd rage. Maybe there will never be another Reddit. Maybe it was unique. This person sure hopes so:

As an HIV-Positive Man, These Are the 5 Questions I'm Asked Most Often About Dating
6 Sexy Gay Video Games Designed to Get You All Hot and Bothered
The Weird, True Story Behind 'Little Shop Of Horrors' (and Its Secret Lost Ending)
Homosexuality Was 'Cured' 47 Years Ago This Month
English