Milo Yiannopoulos, prominent GamerGater and a major contributor to right-wing reactionary website Breitbart.com, collaborated on story ideas with a young man who has recently been arrested for terrorism.

Between July and September, Goldberg had been in contact online with an individual, who — unbeknownst to Goldberg — was actually an informant. Goldberg had allegedly provided the individual with details on how to construct a bomb and instructed him to fashion a pressure cooker bomb and fill it with nails, metal and other shrapnel dipped in rat poison.

According to the complaint, Goldberg directed the individual to carry out a bombing at a memorial in Kansas City, Mo. commemorating the Sept. 11, 2001 terrorist attacks.

But that’s not all Goldberg was up to last July. Under the Twitter handle @MoonMetropolis, Goldberg was busy Tweeting support for GamerGate and working with Milo Yiannopoulos. Remember Breitbart’s shameful (and discredited) attack on Black Lives Matter activist Shaun King, claiming that King was only pretending to be black? It appears that Goldberg is the one who originally suggested the story to Yiannopolous. In fact, Goldberg seems to have been the primary source of the Breitbart article.

Milo Yiannopoulos deleted any Tweets and other communications linking himself to Goldberg, but before he did a user of Reddit’s GamerGhazi community managed to archive the incriminating evidence.

On ultra-right troll blog Blazing Cat Fur, Goldberg (or someone pretending to him) described how he had helped Milo Yiannopolous write the article attacking Shaun King. The post (archived here) bragged of how Goldberg helped Breitbart fight “the SJW (social justice warrior) movement and its petty identity politics”.

As evidence of Goldberg’s involvement in the story, the post included a few screenshots of email correspondence between himself and Yiannopoulos:

The next email Goldberg sent contained links to the Facebook profiles of King’s relatives.

A few hours before, Yiannopoulos had Tweeted a link to a thinkpiece Goldberg had written for Thought Catalog titled “How Social Justice Warriors are Creating an Entire Generation of Fascists.” Yiannopoulos complimented the author: “whoever it is, they are great.” He has since deleted the Tweets, so here are some screenshots below: 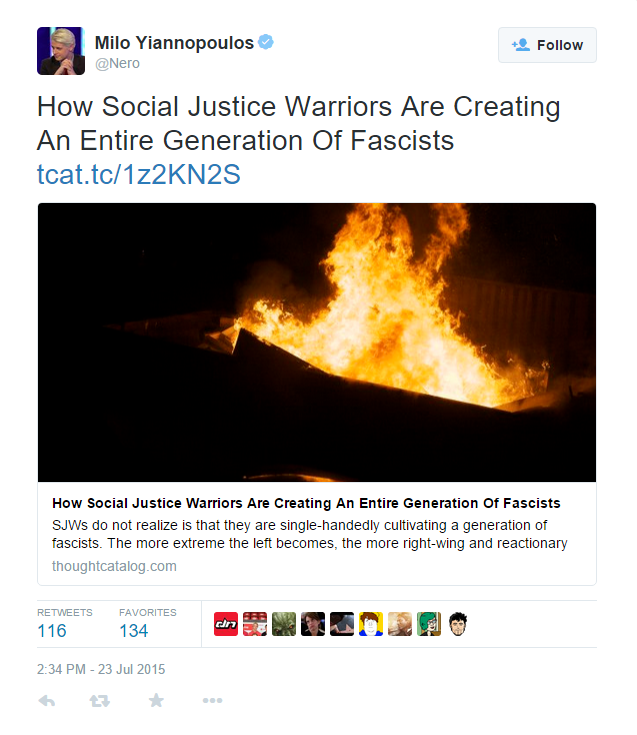 A month later, Goldberg wrote to a person he believed to be an aspiring Islamic terrorist,

Have you decided what kind of attack you want to carry out on 9/11, akhi? I was thinking a bombing. … We could make pipe bombs and detonate them at a large public event… It needs to be big.

Who is Milo Yiannopoulos?

Milo Yiannopoulos, as previously mentioned, writes for Breitbart.com, an ultra-conservative news website whose dubious accomplishments include attacking ACORN with the help of filmmaker James O’Keefe, who was later arrested and charged for attempting to break into the office of a United States senator.

He attended Cambridge and Manchester, but dropped out of both of them.

In 2010, he ran a project called the Startup 100 for the Daily Telegraph, but it fell apart due to a lack of sponsorship, losing a lot of money for its parent company. The Guardian reports,

The fallout from the awards is understood to have left the Telegraph nursing a loss running into tens of thousands of pounds. Wrong Agency, Yiannopoulos’s company which he used to run the event, was dissolved in May 2011.

In 2011, Yiannopoulos helped launch a European technology news website called The Kernel, which collapsed without paying many of its contributors.

When one writer emailed Yiannopoulos to demand the money he owed her, he responded with a misogynist tirade, calling her a “common prostitute” and threatening her with blackmail:

You’ve already made yourself permanently unemployable in London with your hysterical, brainless tweeting, by behaving like a common prostitute and after starting a war with me, as perhaps you are now discovering.

You’ve not only torpedoed your chances of ever having a career in journalism in London, but you’re rapidly losing my sympathy as well.

The more I hear of your feverish gossiping, the more I’m moved to publish the real story. The shameless, disgusting, drunken sluttishness, about which the entirety of ____ was sniggering on a daily basis. Your reputation on the start-up scene, propagated by your ‘friends’.

This is obviously not the appropriate way to respond to a former employee to whom you owe backpay.

As a contributor for Breitbart.com, Yiannopoulos is one of very few journalists willing to cast his lot in with angry nerd katamari known as GamerGate. Breitbart frequently runs articles accusing GamerGate’s critics (especially its female critics and trans critics) of hellacious crimes against Western civilization, all based on questionable evidence from sources like Encyclopedia Dramatica and, evidently, the occasional terrorist troll.

Though gay, Milo Yiannopoulos frequently makes comments disparaging LGBT issues and LGBT people. He seems rather ashamed of his sexuality. In a blog post written in response to a cute YouTube video, Yiannopoulos explained why he would stay in the closet if he chose to have children:

But the thought that I might influence my child towards a lifestyle choice guaranteed to bring them pain and unhappiness – however remote that chance may be – is horrifying to me. That’s why, quite simply, I wouldn’t bring a child up in a gay household and, if by some chance I were to end up having a child with a woman, I would seek to insulate that child from inappropriate situations and influences until they were old enough to understand the principles, ramifications and, yes, the mechanics surrounding such an enormous decision.

What? Is being gay that awful? Milo elaborates:

Is being homosexual “wrong”? Something somewhere inside of me says Yes. You probably don’t agree. But I think we can all agree that, unless you live in the cosseted bubble of a liberal metropolis, the reality of growing up gay for most people is a horribly lonely, miserable experience. (If you don’t know, take it from me: it is.)

The feelings of alienation and rejection it engenders are responsible for the sorts of repugnant tribal posturing you see on the streets of Soho on a Friday night, as bitterly unhappy queers engage in degrading and repulsive behaviour, simply because they want to feel a part of something after a lifetime of marginalisation.

I think I’d have made a great dad. I mean, aside from being clever and charming and witty and fantastically good looking, I’d spoil them rotten while being fastidiously attentive to their academic performance and career aspirations. But it’s wrong to expose an innocent child to the possibility of gay influence.

@elliotPR Who said I’m not happy with who I am?

For the record, I don’t hate myself. Nor do I hate gays. They provide a valuable service. I mean, where would fat girls be without gays?

Yiannopoulos also has a history of expressing anti-Semitic sentiments, though in the past he has claimed to be of Jewish ancestry. Check out this Twitter exchange: 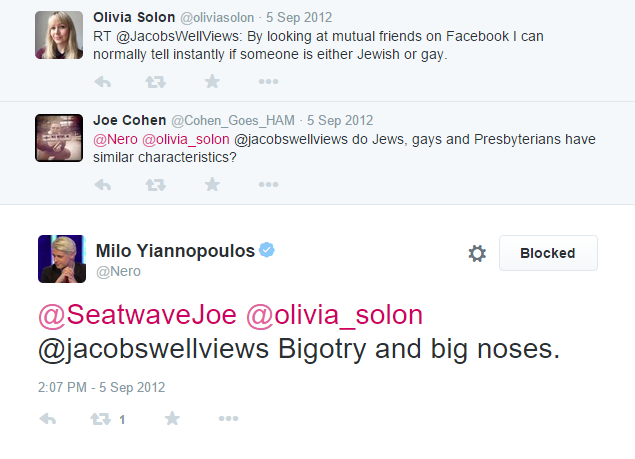 For a while, he wrote under the name Milo Wagner. There’s nothing wrong with using a pseudonym, but one can’t help but wonder if he took his fake surname from the anti-Semitic composer whose work grew to be adored by the Nazis.

In 2006, Yiannopoulos posted a few selfies to his (now defunct) Flickr account that appeared to show him wearing an Iron Cross, a symbol frequently associated with the Nazis. The images can be found here.

Internalized bigotry is sad and common, but its sufferers forfeit any right to pity when they lash out against others in such a destructive, ugly way.

Milo’s Reaction to the Scandal

Breitbart’s reaction to Goldberg’s arrest has been to psychologically project like an alcoholic slurring, “I’m not drunk; you’re drunk” before soiling himself and passing out in the neighbor’s azaleas. Yiannopoulos has shamelessly published articles accusing his political enemies of chatting with Goldberg.

For the people asking: My communication with that person was to tell them their work was not up to professional standards of sourcing.

To be clear: I privately contacted a writer to tell them their sourcing was unacceptable, and to hold themselves to higher standards.

What Can We Make of All This?

What’s surprising about Goldberg’s arrest is not that he spewed hateful, violent rhetoric online; what’s surprising is that he was punished for it. The internet certainly has no shortage of vitriol; even recipe forums will usually have a sprinkling of “kill yourself”s and “I hope you get cancer”s. Online harassment and threats are especially bad for women, particularly women of color. A woman who expresses any kind of feminist sentiment on the internet can expect to receive a barrage of violent sexual threats, which the authorities don’t really do very much about. If Goldberg had given instructions on how to plant a bomb at a feminist event rather than a 9/11 memorial event, would he have been arrested?

The mountain of threats of rape and murder that angry, lonely men heap on women on the internet are generally dismissed as trolling. To be fair, the vast majority of those threats are empty. Though every once in a while, an angry netizen will make good on those threats.

The FBI’s decision to arrest Goldberg in this particular instance suggests that the agency’s priorities lean toward preventing Islamic terrorism rather than terrorism motivated by white supremacy or misogyny. This is more than a little concerning, considering that the biggest terror threat to Americans comes from angry white men, not from foreigners or Muslims. To focus on Islamic terrorism while ignoring domestic right-wing terrorism is foolhardy and dangerous.

Goldberg probably doesn’t see himself as a terrorist; he likely considers himself a troll, whose only intention is to upset other people. But whether your intentions are to cause physical harm or simply to mess with somebody, giving another person instructions on creating and planting a bomb is clearly a bad idea. Threatening to rape or murder someone because you disagree with her politics is unreasonable (not to mention illegal), regardless of intent. Constantly “pretending” to be a terrible, violent bigot isn’t significantly better than actually being a terrible, violent bigot unless you’re Stetson Kennedy.

Kurt Vonnegut said, “You are who you pretend to be, so we must be careful about what we pretend to be.” Goldberg pretended to be a violent, dangerous reactionary, and as far as the FBI is concerned, that’s what he is.

What about Breitbart’s Milo Yiannopoulos? He collaborated with Goldberg, not knowing about the young man’s other offenses. Milo obviously wasn’t a part of Goldberg’s bomb plot, but based on Milo’s statement it’s clear the two shared ideological leanings. Finding oneself involved with such a loathsome human being is the kind of thing that would lead an ordinary person to do a little bit of soul-searching, but Yiannopoulos appears to lack the moral strength to do so. Instead, it’s more convenient (and more profitable) to turn one’s self-loathing outward and affix it on a convenient target: immigrants, women, people of color, other LGBT people, and so on.

Breitbart’s unwitting collaboration with a terrorist does not make it a terrorist organization. But by telling white men, many of them frustrated by America’s growing problem of economic inequality, to blame their miseries on scapegoats, the folks at Breitbart and similar reactionary propaganda machines fan the flames of rage that inspire characters like John Russel Houser and Elliot Rodger and, perhaps, Joshua Goldberg, to hurt others.

Milo Yiannopoulos is not a terrorist. He’s more like that weird Palestinian Mickey Mouse clone who went viral a few years ago: a sad, low-rent knockoff whipping simple-minded followers into a dangerous frenzy.

The Guy Making Us Swoon This Week is 'WandaVision' Star Paul Bettany
Harry Potter Live Action TV Series Potentially in the Works... and We're Over It
13 Classic Disney Characters Who Were Probably Gay
This Tale of Woe Is Exactly Why You Don’t Send Unsolicited Nude Pics
English