Meet Lloyd Schofield, the California “Intactivist” rounding up signatures for a ban on circumcision within San Francisco’s city limits. Schofield and many others that circumcising baby boys isn’t all that different than the highly publicized female genital mutilation that happens in many parts of the world, but it widely banned.

While the health risks associated with circumcision are dramatically lower than butchering that young girls are forced to undergo, is slicing and dicing a newborn boy’s genitals all that different?

“The base of our argument is you’re spending incredible amounts of money doing painful and damaging surgery to an unwilling patient,” he said.

“It’s really not about me,” he said. “People use it as a personal way to attack me, to discredit my message.” 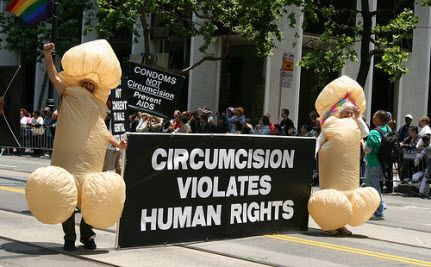 Legal experts predict that even if the ban makes it onto San Francisco’s books this year, it will have little standing against Americans’ constitutional right to practice their religion. Still, we’ve seen the old “freedom of religion” line challenged across the pond recently. Who knows how this could all play out?

If you’re supportive of Schofield’s foreskin preservation play or just need a t-shirt that reads “Help Stop Forced Genital Cutting”, you can check out his movement at www.sfmgmbill.org.

Do you think circumcision should be outlawed?

Drink Up! Here's When the Bars Close in Various Cities Around the World
Reject the Closet and Destroy Capitalism With 'Batman Returns,' the Perfect Queer Christmas Film
Hong Kong's Gay Games Have Been Postponed to 2023 Due to Covid
The Wonderful World of Furries: An Exploration
English