School Considers Closing All Clubs Rather Than Allowing A GSA 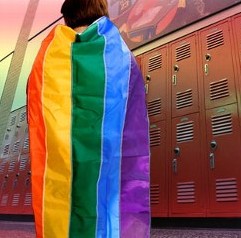 New Mexico’s Clovis High School is in the process of deliberating whether or not to shut down the entirety of the school’s non-curricular clubs in order to avoid having to allow the formation of a Gay-Straight Alliance. Facing national criticism, school officials have attempted to defend themselves, claiming that the Tuesday night’s vote is independent of the matter of the GSA, but nobody is buying it.

The ACLU-NM contends that the vote is directly related and says it believes the district should allow the clubs to continue to exist.

“Non-curricular activities are a vital part of any educational program and provide students with enriching and rewarding experiences,” ACLU of New Mexico Staff Attorney Alexandra Freedman Smith wrote in a letter to the Clovis School Board. “At Clovis High School, you have non-curricular service clubs, religious clubs, a chess club, and other similarly engaging groups. To simply discontinue these clubs would deprive all students of a rich and diverse set of activities to engage in outside of class. Eliminating these clubs would doubtlessly diminish the vibrancy of the high school community in Clovis.”

There are 45 gay-straight alliances in high schools, universities and other youth groups across the state, according to the New Mexico Gay-Straight Alliance Network.

To think that teachers and administrators at Clovis High School are sending the message that they are willing to do anything in their power to not allow gay students to feel supported and safe is simply unconscionable. Why does it take a suicide at schools like this for educators to live up to the expectation to teach and nurture children that is put before them?

How is it that a group of people that spent much of their lives attending college, seeking out employment as educators, and literally applying for the exact job that put them at this crossroads, could so completely fail these children in their care?

Absolutely detestable. Stay tuned for the aftermath of tonight’s vote.

Ryan Raftery Shares '10 Things I Learned About Andy Warhol' Ahead of His Brand-New Stage Show
10 Queer-Owned Businesses to Support All Year Round, Not Just During Pride
46 Trans People Have Been Murdered in America in 2021
'Papa & Daddy' Breaks Barriers as Asia’s First Original Series About Gay Parenting
English