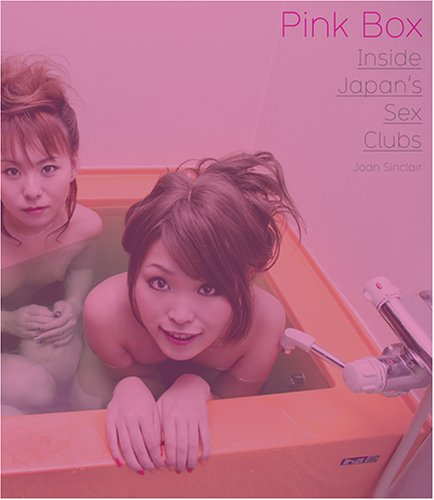 Sex work is often referred to as “the world’s oldest profession”, and in Japan, it’s big business. In fact, sex work is the second largest industry in Japan (after the automotive industry). Photojournalist Joan Sinclair examined the industry for her book Pink Box, named for a private room in the back of an Osaka strip club.

While this sounds like a combination of strip club and brothel — it’s much more elaborate than that. Many soaplands (the Japanese term for these clubs) cater to special fetishes. For example, if your fantasy is groping women on trains, you can go to a club made up like a train packed with consenting women and grope to your heart’s content — for a price. (Certainly better than the creeps who do it for free on actual trains.)

While prostitution is technically illegal in Japan, the legal code is so complex, most sex clubs and soaplands operate in a legal grey area. Most get around it by offering everything up to but not including sex — similar to the laws in America regarding professional doms — though it’s not unheard of to find sex available, if secretly.

Either way, most of the draw for these sorts of clubs is fetish play. Popular scenarios include ripping pantyhose off the women, or “green gel play,” where women splash around in a green slime. Of course, there’s schoolgirl roleplay as well — which shouldn’t be a shock for readers who’ve seen pretty much any anime.

Thankfully, the women are treated very well — a woman can make approximately $140,000 a year working in the club. The women are also mostly middle-class, educated, sober women; the stereotype of the woman with no other outs than sex work definitely does not apply. (Of course, it doesn’t often apply in America, either.) In an interview with Roland Kelts, author of Japanamerica, Sinclair said:

One of the things Westerners kept telling me was, “Find the sad stories, you’re not going deep enough!” But with the Japanese women, I kept looking for psychological damage, exploitation and abuse—and I didn’t find any of it. I found very balanced women making a personal choice.

We’ve included a few photos from Pink Box. All photos are by Joan Sinclair and come from Pink Box, available at bookstores.