Written by Kevin Farrell on February 4, 2011
Be first to like this. 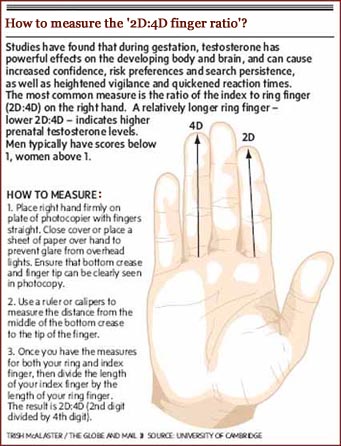 The Myth: You can tell if a person is gay by the size of their fingers.

True or False? Shockingly, this one actually has some real truth to it!

There is a correlation between the size of your ring and pointer fingers that is linked to your sexual orientation. Apparently conditions in your mother’s womb during gestation like rent prices and square footage affect the release of sex hormones estrogen and testosterone, which influence the development of finger size, along with your brain. It’s called Digit Ratio Theory.

Digits are subtly affected by testosterone and estrogen produced in the womb by the fetus (not by the mother). Between weeks 8 and 14, tiny fetal testes, ovaries and adrenal glands secrete the baby’s own supply of sex hormones. These chemical messengers, particularly testosterone, cause chain reactions in the body, spurring the growth of the genitals, encouraging and inhibiting growth in brain regions and causing changes in the fingers. Many scientists believe relative finger length—or digit ratio—is a marker for brain differences molded by hormones. Like a bit of prenatal graffiti, a longer ring finger says, “Testosterone was here.”

John Manning, a biologist at the University of Liverpool, first identified digit length as a sign of prenatal hormones eight years ago. He believes digit ratio is an important, if indirect, tool for studying the fetal brain and the womb, an environment that’s off-limits to scientists except for analysis by amniocentesis. (And even then, because sex hormones fluctuate hour by hour, amniocentesis is a poor indicator of testosterone exposure.)

“Early sex hormones have an organizing effect on the brain that’s permanent,” Manning says. But the differences between the sexes aren’t all that interesting to biologists. More telling are the variations within each sex. Females with masculine digit ratios have more masculine behaviors, he says. Likewise, males with a typically female ratio exhibit more typically feminine behaviors.

A study of digit ratio in Scottish preschool children between the ages of 2 and 4 found strong relationships between digit ratio and gender-normative behavior. Girls with masculine-type finger ratios tend to have higher hyperactivity scores and more problems relating to their peers than do other girls. The same study, published in Early Human Development, found that boys with female-type finger lengths are on average more emotional than other boys. “They tended to be very sensitive,” says Manning.

Except for genitalia, relative finger length is the only physical trait fixed at birth that is sexually dimorphic—meaning males and females show typical gender differences. Other sexually dimorphic traits, such as height and waist-to-hip ratio, don’t appear until puberty.

Let’s check out some famous fingers. A study at the University of Melbourne found, “The picture [of President Obama] provides some detailed guidelines to assess the digit ratio of Obama’s left. The 2D:4D digit ratio of his left hand is likely to be in the zone: 0.90 – 0.92. A very ‘masculine’ finger length ratio!”

It’s important to note that finger length is but one indicator in a whole spectrum of genetic causation. So don’t go around slyly judging your coworkers by their handshakes. Still, we’re very surprised to see that statistically, this myth has quite a bit of truth to it!

Tell us your finger ratio below!