A Legacy of Swedish Schlong: The Skarsgårds Have a History of Full-Frontal on Film and TV

Written by Stephan Horbelt on October 22, 2017
Be first to like this.

It takes a whole lotta confidence and a fair amount of bravery for an actor to go full-frontal on-camera. (Especially in the internet age, which pretty much guarantees than anyone can look up a shot of your peen upon request.) But for one family, stripping down on-camera is more than a pattern — it’s a legacy. Skarsgard nude footage is practically a guarantee when you’re talking about a project of the sexy Swedes, and thanks to Mr. Man, footage of their clothes-less exploits have been gathered in one sexy, jaw-dropping montage.

The Skarsgard sibling being talked about most recently is Bill, who played the titular role (quite brilliantly, we might add) in the latest adaptation of Stephen King’s It. As Pennywise the dancing clown he scared the wits out of us, but the role kept him fully clothed. (Thank god, as we’d rather not see alien monster clown penis, thankyouverymuch.)

But seven years ago, in a film called Behind Blue Skies, Bill bared it all. It was a comedy/drama that took place in 1975, and Bill plays teenager Martin, who gets a summer job at a local hotel in Sweden. More important than the film’s premise, though, there’s a scene in which Bill gets his clothes stripped off of him by a young woman who proceeds to go to town on his crotch. One shot has her holding his rather erect uncut penis, though we’re thinking that might have been a prosthetic.

Bill’s more famous, older brother Alexander is known for his roles in the HBO series True Blood and more recently the Reese Witherspoon-and-Nicole Kidman-produced Big Little Lies. But as most of us remember, there was that famous scene toward the end of True Blood‘s run (the finale of Season 6) that saw Alexander show off his Swedish meatballs (and sausage).

We remember it like it was yesterday: Alexander’s character Eric Northman was nude sunbathing in the Swedish snow, just chilling and reading a book, when all of a sudden his skin started burning and he burst into flames, but not before he stood up and bared the goods. The episode was called “Radioactive,” after all.

Fortunately that wasn’t the end of Eric, and we got a little more Skarsgard in our lives before True Blood officially called it quits the following year.

We saw Alexander Skarsgard nude more recently in Big Little Lies, in a scene in which his erect penis (though most assuredly a prosthetic) was nailed with a tennis racket by Kidman’s character. (Ouch!)

Until this Mr. Man montage video we actually hadn’t heard of this equally sexy Skarsgard brother. But Gustaf is an actor also, having appeared in the 2013 film Vi. It’s a Swedish film about a relationship that is gradually disintegrating, and from what we’ve heard, Gustaf’s nude scene could very well be the best part of it.

It also doesn’t hurt that this Skarsgard nude scene involves a semi-erect penis. We’re not complaining, and we doubt you will be either.

Even Papa Skarsgard, Stellan, has a history of stripping down for roles. You’ve seen him in films as diverse as The Girl With the Dragon Tattoo and Thor, but maybe you haven’t heard of the film Breaking the Waves, a 1996 Lars von Trier-directed project in which Stellan plays an oil rig worker who breaks his neck and is paralyzed.

The first on-record Skarsgard nude scene sees Stellan strip down on-camera and place the hand of his girlfriend (played by Emily Watson) on his uncut penis.

For the Skarsgards, showing your penis on film and television really is a family affair.

Click on the below photo for a montage of Skarsgard nude scenes: 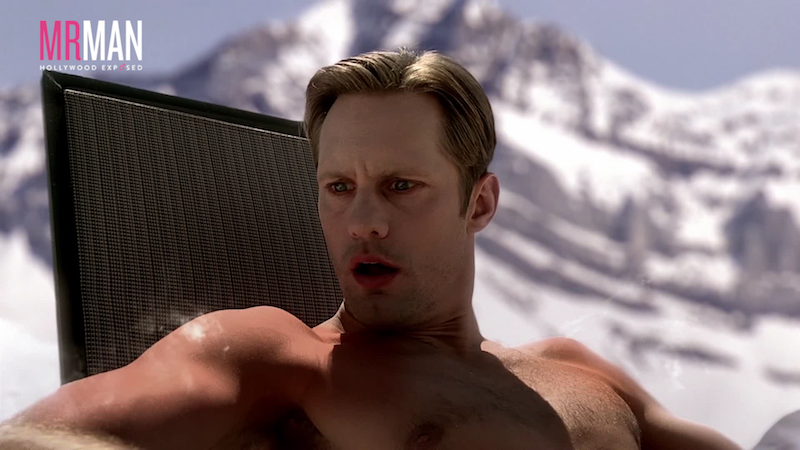