Internet commenters shed testosterone-rich tears in response to EA’s announcement that its upcoming video game FIFA 16 would be the first of its series to feature female players. “Nobody wants this,” typed a guy who is probably very nice (why don’t women like him? Why do they always go for jerks instead of nice guys like him?). Another set his no doubt very muscular fingers to his keyboard to manfully tweet, “Women have ruined the earth and now they are ruining fifa [sic]!”

According to these well-adjusted he-men woman-haters, the mere inclusion of digitally-rendered playable female characters with minimal jiggle physics is an affront to the game of soccer and a threat to masculinity itself.

Not a threat to masculinity? The imminent death of at least 4,000 men preparing for the 2022 World Cup in Qatar.

By now, the general public (even that portion of it that resides in the United States) is aware of the scandals surrounding FIFA, including the fact that Qatar — the site of the 2022 World Cup — is a nightmarish place to work. Migrant workers from countries like Nepal, India, Bangladesh and North Korea toil in unsafe conditions under the hot sun, earning little to no pay. Many are killed in accidents. Others die of sickness caused by filthy living conditions in employee housing. They can’t leave their jobs (or even the country) without their employers’ permission, these workers are legally forbidden from quitting.

What’s it called when someone works for you and you don’t have to pay him and he can’t quit and you can kill him without consequence?

Slavery. It is called slavery.

Lusail City, meant to be a symbol of Qatar’s progress, promises to include futuristic architecture, luxury hotels, schools, villas, artificial islands, and an air-conditioned stadium that looks like a space robot’s vagina. 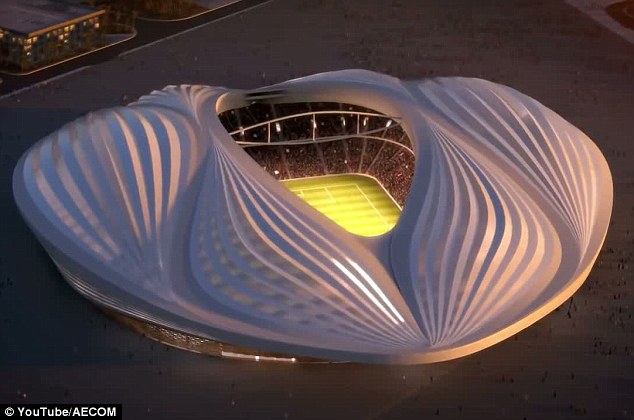 The International Trade Union Confederation predicts that 4,000 workers will die before Lusail City is completed. Four thousand men (the equivalent of 1.3 9/11 attacks) will be sacrificed for the construction of a giant gleaming cyberpussy. It’s like a scene from a dystopian novel written by an Men’s Rights Activist. Paul Elam has nightmares about this when he passes out from diarrhea-induced dehydration. Four thousand men will die to build a supersized iVulva in the middle of the desert.

If the human sacrifice of a village worth of men upon a great yonic altar upsets our masculinist sports fans, they don’t show it. The men who reel in horror at the promise of digital Abby Wambach have shown no outrage over the shameful abuse of migrant workers in Qatar, no concern for the dangers the climate’s intolerable heat poses to the athletes’ health, and no disgust at the bribery and corruption that brought the World Cup to this sweltering hellscape in the first place. To these fans, the presence of virtual women is worse than the murder of actual men.

Like a certain group of gamers that has spawned in the fetid corners of the internet, these footy fans want to keep their hobby uncorrupted by issues like identity politics or human rights concerns or women existing. Entertainment must remain apolitical. A man shouldn’t have to think about feminism or human slavery when he plays FIFA 16, they say. He should be able to sit on his couch, lit only by the dim glow of a television screen, and play with his balls, mindless and alone.