Written by Terri Washington on July 7, 2015
Be first to like this.

Unless you’ve been living under a rock, you’ve probably heard that the United States Women’s National Team won the Women’s World Cup this last weekend. An analysis by Public Radio International suggested that their win goes hand-in-hand with America’s gender equality. In short, PRI claims that countries with better gender equality have better women’s soccer teams.

PRI journalism fellow Kuang Keng Kuek Ser looked at the characteristics in the 23 countries that competed in the 2015 Women’s World Cup and found that the countries with the best records also had the smallest gaps in discriminations between men and women. Ser used the 2013 Gender Inequality Index from the United Nations and found that countries where women hold parliament seats, have strong participation in the labor market and better reproductive health also have more successful women’s soccer teams (according to FIFA points). 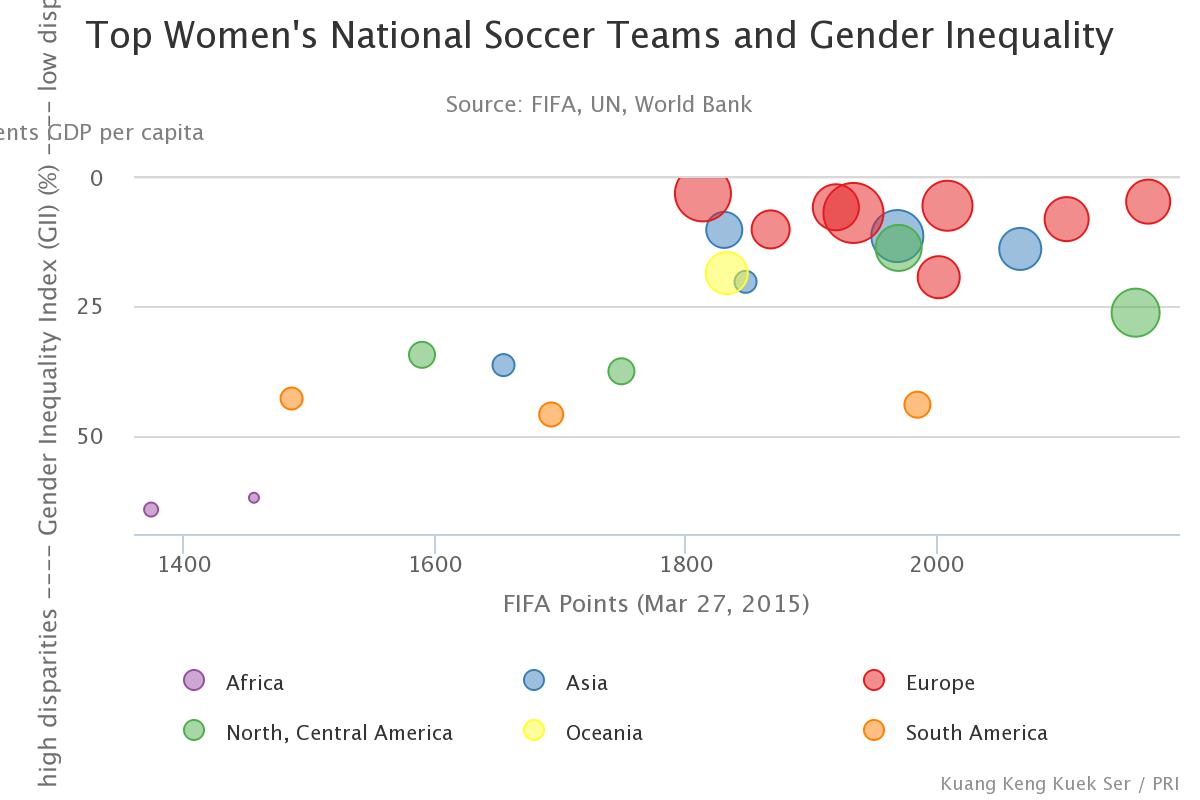 The graph above explains the Gender Inequality Index percentage on the Y-axis compared to FIFA points on the X-axis. The higher a country’s FIFA points, the further down on the X-axis they are; the fewer disparities a country has on the Gender Inequality Index, the higher their bubble. Each bubble’s size on the chart indicates each country’s income — the bigger bubbles represent higher income countries.

There is an exception to every rule and Brazil was found to be that exception. Brazil has placed amongst the top four teams in the world twice in seven years in the FIFA Women’s World Cup results but still has a higher gender inequality index at 44 percent. While Brazil has made great strides in nearly erasing the differences between men and women on health and education — at least according to the World Economic Forum — the problem area that still remains for Brazil is the wage gap: on average, Brazilian women make 30 percent less than men. Nevertheless, Brazil is sixth on the list of all-time best performances in the Women’s World Cup.

The United States, Germany and Norway are the top three in all-time best performances in the Women’s World Cup and they rank fifth, sixth and first respectively on the gender inequality index whereas Brazil is ranked 79th. Ser also found that the countries with higher ranking teams are also countries with high income economies. The exception to economic rank being China which ranks seventh all-time in the Women’s World Cup but 104th on the World Economic Forum. It nearly begs the question: does gender equality create higher wealth for a nation or vice-versa?

Although there’s no proven correlation between soccer success and gender equality, there does seem to be some connection. So if a country hopes to go far in France at the 2019 FIFA Women’s World Cup they better start by providing more opportunities for women in their country.

We're Low-Key Obsessed With These Ridiculously Fun, Trashy Gay Pulp Novels
The Tragic Story of the Gay Couple in 'It' Was Based on the Fate of Charlie Howard
This Week We Can't Help But Swoon Over 'Scream' and 'Yellowjackets' Star Jasmin Savoy Brown
Still Here, Still Queer: The Rise (and Rise) of LGBTQ Zine Culture
English