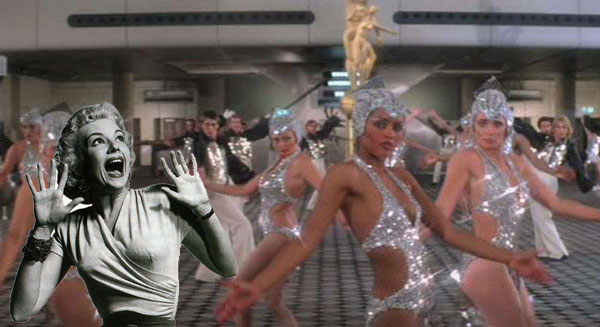 What were they thinking? Did they actually know that they were making a monument to weird cinema, or did they just think that they were creating great art?

We might never know what was going through the heads of the people who created history’s best-worst films. (Although in many cases, it was probably “where can I get more of this excellent cocaine?”) But over the last few years, I’ve made terrible films a topic of my constant study. My partner and I have built an archive of cinema’s strangest missteps, even hosting screenings of some of our favorite scenes.

And to be honest, the intentions of the filmmakers don’t really matter that much. All that matters is that they thought that reggae was the perfect musical style for an allegory about Satan; or that their fight scene culminates with a man being hoisted in the air by a hook jammed through his eye socket; or that they felt it necessary to slap a woman in the face with a giant rubber hand in a movie about mutant rats.

Most terrible movies are simply terrible, but a few achieve a strange greatness that pushes them through the bad-movie barrier. At that point, they pass from being dismally, boringly unwatchable (Howard the Duck, Gymkata, Dungeons and Dragons) to being absolutely captivating.

Here are some of my favorites:

It’s a biblical allegory in which the devil runs the music industry, set in the far-off future of 1994 as envisioned by the 1970s. Oh, and about 20 minutes in, it decides it’s also going to be a musical.

So, what did the ’70s predict for the ’90s? Lots of hologram stickers, for one thing. Also frantic disco, massive cars with random plastic domes stuck to them, and colonies of stubborn homeless hippies. Oddly enough, the movie accurately predicts media consolidation and American Idol.

Stick with it all the way to the end, and you’ll be rewarded with the most literal interpretation of “deus ex machina” ever committed to film. And apparently, there’s a long-lost deleted scene featuring dinosaurs — this movie has everything! — and it breaks my heart that the dinosaur footage was probably destroyed.

Surely you are familiar with the “different places” scene, wherein Elizabeth Berkeley makes some striking acting choices. Sullen and weird, she answers a question about where she’s from my exclaiming “different places” while exhibiting five or six simultaneous self-contradictory emotions.

But have you ever noticed the amazing costumes on the extras behind her during that scene? There’s a lady pirate, a man in chain mail, a woman with devil horns, and a ninja that walks by in the background at least three times.

No matter how many times you watch this film, there’s always more to discover.Let’s also touch on the amazing “doggie chow” scene, in which two women bond over their childhood love of eating dog food. No actual human being has ever spoken to another in this manner ever before, in the history of anything, but this film won’t let that stop it.

This is a controversial choice! Some people just can’t get into Xanadu, and I can’t say I blame them. There are definitely some long stretches of boring bland beige, and if you want to skip past them, I say “wise choice.”

But there’s still a heavy-enough concentration of WTF in this film that I think it’s worth at least one watch.Olivia Newton-John’s career had a hard time bouncing back from this flop. And Gene Kelly’s never did, because he died immediately after it came out. Reportedly, he only took the role because they were shooting the movie down the street from his house.

I genuinely love the insane mashup of ’40s swing and ’80s music in the “Dancin’” number, which seems to have been filmed in a state of total confusion by the crew. Where do we point the camera? Who do we light? What part of the scene are we shooting again?

Be patient with Danger Diabolik. There are some languid stretches where you can relax and zone out, but whenever the music picks up or voices are raised, it’s time to sit up and pay attention.

And don’t worry about the plot: it has something to do with spies, jewels, money, and a master criminal, but who cares. If you try to follow along, you’ll just get annoyed that it doesn’t make sense.

The delightful “Exhilarating Gas” scene seems to be an accidental homage to the dancing soup of The Wild World of Batwoman, in that both baffling scenes feature a criminal with the inexplicable plan to distract people by subjecting them to a drug that makes them party.And then there’s an animated composite-sketch sequence with a hooker that is a genuine, un-ironic work of art.

This is a great equalizer when it comes to bad movies, because pretty much everyone can agree that it is both terrible and a lot of fun.

The rumor I heard is that “filmmaker” Tommy Wiseau made the movie after getting rich through some scheme involving counterfeit jeans, although that makes almost as little sense as the plot of the film.

Watch for hammy acting, plot threads that go nowhere, and sexual situations that seem to have been written by an extraterrestrial that observed but did not fully comprehend the human species.

Plan 9 concerns an alien race that is afraid humanity will develop a terrible weapon that will destroy the galaxy. So they come to our planet and raise the dead, for some reason. Bella Lugosi tromps around for some of the film, but he died while they were shooting it so they just replaced him with a man who holds a cape in front of his face.

Enjoy such delicious dialogue as “Your stupid minds! Stupid! Stupid!” and “Future events such as these will affect you in the future.”If you really want to make a night of it, watch Plan 9 first; then Ed Wood; and then Glenn or Glenda if you dare.

I simply adore Ed Wood’s fearless filmmaking. Here was a man with a vision who refused to let anything, including the boundaries of simple logic, stop him.

There’s a whole series of Maryland-made martial arts movies starring roughly the same crew of actors, including the genuinely beautiful and talented Cynthia Rothrock. Undefeatable is my favorite because it features the most abrasive Baltimore accidents, a stupendously crazy kidnapper whose grimacing really steals the show, and a gory final fight that you will absolutely be telling people about in disbelief the next day.

Also good: Honor and Glory, which has a plot so dumb it frees you from any obligation to try to understand it.

I came across this film because I was looking for Burgess Meredith in things other than Batman, but I promptly forgot all about The Penguin when I got to the jaw-dropping seance scene featuring the hapless Mrs. Herz.

Try to bear with me on the premise here: a Native American spirit is reincarnated as a tumor on a woman’s neck that eventually develops into a malevolent midget, or maybe a man in a rubber alligator costume, or possibly both of those things in space. Tony Curtis is a charlatan psychic who enlists the help of a shaman to defeat the spirit, but for some reason only “white man magic” is effective, so he has to summon the mystical powers of reel-to-reel computers. Sure, okay why not!

9. Beyond the Valley of the Dolls

Or really anything by Russ Meyer. Really, anything. Like Ed Wood, this man was incapable of making a flop because he knew what he wanted to see on the screen (usually breasts) and every scene is a success as long as it titillates. As a gay man, I’m a little “meh” on all the female nudity, but your milage may vary. My favorite parts are the dialogue, all of which is strangely florid and over-written in the way that a computer might auto-translate text after running it through several languages and then back to English.

This film involves a female singing group and their lewd adventures through Los Angeles as they rise to fame, but the plot is mostly immaterial compared to the bizarre scenes of partying freaks and the delicious “it’s my happening, and it freaks me out” dialogue.

Not a film, but still a master-class in showbiz. This one-minute-and-twenty-second masterpiece features one of the greatest directors ever to have lived, getting progressively drunker as he slouches over a table, slurs his lines, and probably vomits after the camera cuts. Across the table, you can see two extras feel their hearts sinking with the knowledge that this commercial, their one chance to be seen acting across from the great Orson Welles, will absolutely never make it to air.

And yet, against all odds, the footage has enjoyed a life span long beyond what anyone involved could possibly have predicted. I include it on this list because it demonstrates how little is required to produce something so awful that it becomes great. In this case, as in so many, their crucial first step was to assume that they were producing something completely mundane.

There are, sadly, some movies so bad they’re just bad. They might have a few worthwhile moments, but on the whole you needn’t waste your life trying to wring a few drops of enjoyment from them. Unless you are a true devotee, feel free to skip Zardoz, Master of Disguise, Lost Horizon, Starcrash, From Justin to Kelly, Street Fighter, Skiddoo, Mac and Me, Myra Breckinridge, and anything in the 1313 series.

Munchies and a Movie: The 10 Best Films to Watch While You're Stoned
An Abridged History of How 'Steven Universe' Went From Concept to Hit Animated Series
These 15 Amazing Artists Will Keep Your House Queer AF
5 Holiday Fitness Tips for Those Worrying About the Season's Nonstop Parties
English