Written by Booty The Unicorn on January 13, 2011
Be first to like this. 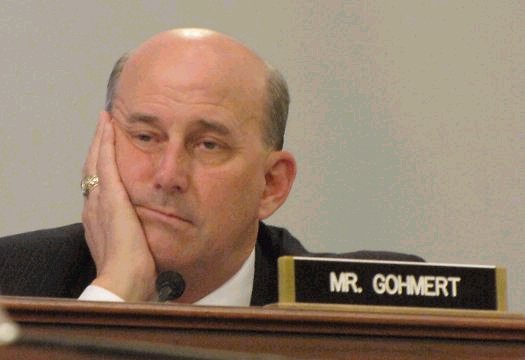 Everything is bigger in Texas, they say. So why should bad ideas be an exception to the rule? Texas Republican Rep. Louie Gohmert has proposed a bill to allow our country’s top elected officials to carry firearms onto the House floor in the Capitol building.

This proposal disregards the fact that when guns had been previously banned throughout the entire District of Columbia, the murder rate dropped 25% before the Supreme Court struck down the ban. Guns simply lead to criminals arming themselves with more guns.

“It’d be a good thing for members of Congress who want to carry a weapon in the District,” he said. “I know friends that walk home from the Capitol. There’s no security for us,” he said, adding that the measure would deter people from attacking members. “There is some protection in having protection.”

The Congressman claims he wants to carry a firearm because during the health care debate last year, he was approached by a stranger and yelled at. So he wants a gun?!

The Arizona shootings were the result of lax gun control laws in the state, and in our country. Insisting senators and members of congress carry firearms doesn’t soothe the problem, it turns the temperature up a million degrees.

But there’s no way this bill could possible pass, right? Right?

Jobriath, the World's First Openly Queer Glam Rock God, Would Be 75 Today
Learn These 11 Bits of Gay Mexican Slang for Flirting and Hooking Up
In 1933, Nazis Quickly Declared a 'National Emergency' Then Tortured and Murdered Queer People
'The Queer Frontier': 5 Things You Didn't Know About the (Super Gay) Wild West
English